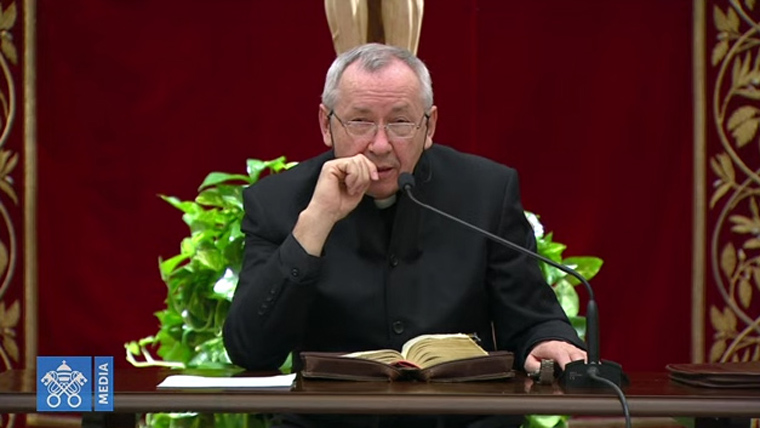 VATICAN CITY (CNS) — The Friday Lenten meditation for priests who work at the Vatican turned into an online event March 6 as Vatican officials continued to study precautions for avoiding the spread of the coronavirus.

While top officials of the Roman Curia were concluding their annual Lenten retreat outside of Rome, priests who work at the Vatican originally were invited to begin their day with a half-hour Lenten meditation in the Clementine Hall of the Apostolic Palace.

But, in response to the coronavirus spread, the Vatican adopted the recommended health precaution of discouraging large meetings and gatherings, and so offered the meditation online instead.

The Friday reflections in Lent, like in Advent, usually are led by the official “preacher of the papal household,” who, for the past 40 years, has been Capuchin Father Raniero Cantalamessa.

However, the 85-year-old friar was unwell — not with the coronavirus, the Vatican press office said — so the March 6 meditation was given by Jesuit Father Marko Rupnik, the mosaic artist and theologian.

To avoid gathering dozens of people in one room, Vatican Media broadcasted Father Rupnik’s talk live on its YouTube channel so that all the priests who were invited could participate, said Matteo Bruni, director of the Vatican press office. He did not know how many people, if any, joined Father Rupnik in the hall, but most participants were watching online.

The Vatican Media camera focused only on Father Rupnik and the crucifix behind him.
Father Rupnik began his meditation with the Gospel of John’s account of Mary at the foot of the cross. “Anyone who has spent time with a mother and seen her at her son’s funeral, recognizes immediately the scene is much more difficult than the opposite: a son who buries his mother.

“To see one’s own son die is something absolutely singular, but especially if one’s son is the savior of the world,” he said.

Ancient icons of Mary at the foot of the cross show her with her hand on her cheek, a traditional sign of a person undergoing “the harshest trial” and great perplexity, he said.
In Eastern Christian spirituality, he said, when Jesus is on the cross, he concedes to Mary the “highest degree of wisdom,” which involves finally understanding “the meaning of failure, the meaning of collapse, the meaning of suffering and the meaning of such a humiliating death.”

Throughout her life as a mother, from the moment of Jesus’ birth in a poor stable, Mary had to rethink the popular, and normal, ideas about God’s power and omnipotence and beliefs that the promised Messiah would be triumphant in the sense of political, worldly power.

It is “very, very human” to think that salvation never could come through suffering or “such a cruel death,” he said.

Mary’s growth in understanding the meaning of Jesus’ life, death and resurrection is the same growth, the same conversion, to which all followers of Jesus are called, Father Rupnik said. The reality of what happened to her son changes the way Mary understood the promises of God about Jesus and about the promised Messiah.

“God exists truly as love, and love means giving oneself,” he said. “It’s not abstract, saying, ‘I love you.’ What kind of gift is that? Love is realized through self-giving.”

“Our God manifests himself this way,” dying on the cross out of love for humanity and overturning the most human way of understanding power and suffering, Father Rupnik said.