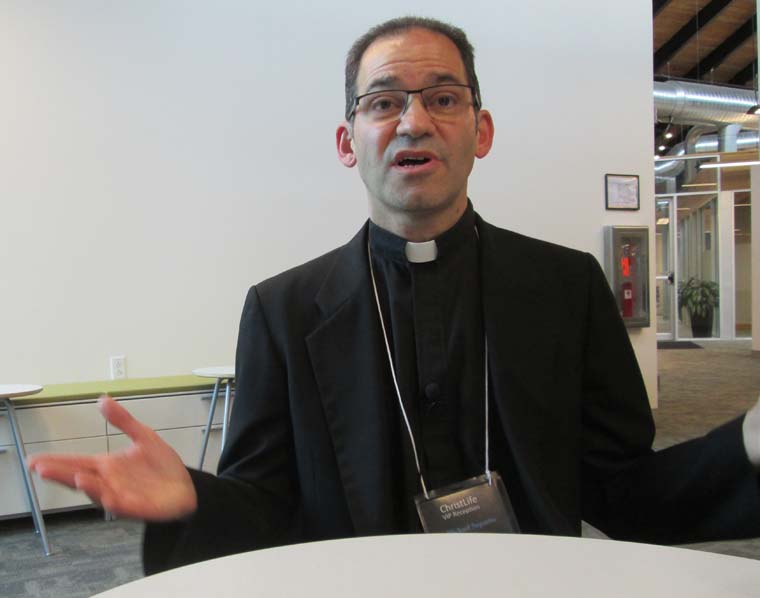 When he was a high school kid in New Jersey, shy and bullied, Father Michael A. Saporito pretty much shut down and maneuvered merely to survive.

But now, as a star speaker in an evangelical program, he has been described as someone who jumps around as if he’s on fire.

Father Saporito spoke Sept. 23 at a reception sponsored by the diocesan Office of Evangelization at OneGroup, a risk-management company in Syracuse. Then he served as a guest speaker at an evangelical training conference that night and the next day at Our Lady of Peace Church in Lakeland.

The event was called the Discovering Christ Training Conference. The program is the first part of ChristLife, a three-part process of making parishes more vibrant by forming disciples.

Practical benefits of ChristLife at his own church in Westfield, N.J., he said, include more attendance at Mass, a new greeter ministry, more contemporary music, a common message in all homilies on Sundays, deeper faith among the congregation, and even conversions.

Father Saporito could have imagined none of that during his “very, very difficult” transition to high school, which seemed like an extended crisis for him. “I knew sports inside and out and refused to play,” he said. “I mean I was so shut down because of the experience that I was having that basically what I did was survived.

“And the last place that I ever, ever thought would be of great help to me ended up being the Church. And I went to this youth retreat experience — 2½ days in December of 1979 — that changed my life forever.”

Christ became real for him then.

He became a lector at his church, and he even joined the pastoral council. “I helped out with the youth ministry,” he added, “because that had been my ticket into the life of the church. I did all those things.”

Father Saporito got his Rutgers University degree and went into accounting, and he loved it. But there was also a tug saying, “I want to be able to provide that type of a transformative experience for people on an ongoing basis.”

So he became a priest in 1992, and now he travels sparingly, because he also is the pastor of a parish with 4,000 families.          Asked how he accomplishes that with just himself and another priest, he said, “Not always easily.”

Father Saporito’s speaking style combines the precision of an accountant with the passion of a convert. He loves the ChristLife series so much that he even joined its board.

Even though there is structure to the first phase of ChristLife, Discovering Christ, it has a certain informality and an air that is “very non-threatening,” he said.

It begins with a meal that has a simple rule — no religious talk. “What we want to do is connect with people,” he explained. Then there is the welcome, with a prayer, singing, teaching, and a breakout into small groups. The groups are asked to ponder questions such as “What is the meaning of life?”

It’s a huge question, but Father Saporito offers this to the people in attendance: “We’re going to propose over the next … six remaining weeks that Jesus Christ gives us the answer to the meaning of life.”

Each week there will be a different question. The participants will consider questions such as “Why Jesus, then?,” “What do we know about him?,” “What can we learn about him?,” and “What makes him unique?”

As the guest speaker, Father Saporito puts up no barriers or walls, nor does he demand a certain level of faith or the ability to quote passages from Catholic texts. This is not “Jeopardy!” for Catholics, it is discovery for the curious.

Father Saporito really enjoys the small-group sessions. “There was a buzz in the room,” he recalled.

He prefers that buzz to the drone of non-liturgical duties in his huge parish, things like buildings and grounds, finances, and staff concerns. Those are the aspects of his vocation that make it “busy, busy-busy.” But when he can break off into areas such as the ChristLife sessions, he is dizzy with excitement.

At those sessions, he recalled, there were “people singing, people talking, people participating. I would go home and find it hard to go to sleep.”

He wanted to bring that excitement to his parish, The Parish Community of Saint Helen. For example, the new greeter ministry there has special touches, such as greeters helping the elderly to their car or walking people to their car with an umbrella. The idea was to banish any impersonal aspect at the gigantic parish.

His parish’s greeter ministry is called “25:35.” Father Saporito said it stands for a verse in Matthew: “I was a stranger, and you welcomed me.”

ChristLife has been in operation for six years at Saint Helen. One thousand people have gone through its Discovering Christ program, with perhaps four or five conversions to the Catholic faith. That includes another year of preparation; they go through the Rite of Christian Initiation of Adults.

He has seen other transformations as well.

He knows a man who at first did not want to attend the course with his wife. “They did all three legs of the ChristLife course, which is Discovering Christ, Following Christ, Sharing Christ,” he said, “and then they came back to be table leaders to help us with doing it again for other people.”

He cited another example:

“There was a woman who was taking care of her mother for more than 10 years because she had Alzheimer’s disease. She was home. She would describe herself as spiritually dead. And then she had written me a letter after she had finished this series.”

In the letter, the woman said that when she prayed with other people in ChristLife, “‘I just felt like the Lord was with me; the spiritual deadness that I was experiencing really just gave way to a new life.’

It was suggested to Father Saporito that if he did his incredible transformation from his own high school years, then apparently people can do it later in life too.

“Absolutely,” he said. “Never too old, and it’s never too late.”