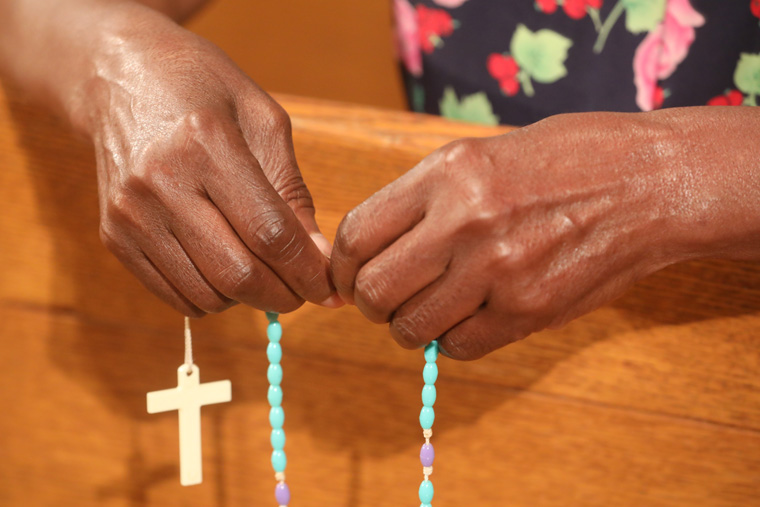 WASHINGTON (CNS) — Washington Cardinal Wilton D. Gregory led a recitation of the rosary May 17, imploring Mary to “entrust to her Son” all those affected by the pandemic.

The rosary took place at the Basilica of the National Shrine of the Immaculate Conception in Washington as part of a worldwide prayer effort to end the COVID-19 pandemic.

“In communion with the Holy Father following the example of the first Christian communities in this time of great trial, we lift up to the Lord through the intercession of the Blessed Virgin Mary, unceasing supplications for the end of the pandemic,” Cardinal Gregory prayed at the start of the rosary.

Recitation of the rosary at the national shrine was part of a worldwide marathon of rosaries for an end to the COVID-19 pandemic that was requested by Pope Francis. Each day during May at noon Washington time (6 p.m. at the Vatican) the rosary is prayed from a different Marian shrine around the world.

Pope Francis began the rosary marathon May 1 at the Vatican, and will conclude it there May 31.

The recitation of the rosary was livestreamed from the national shrine on various Vatican social media platforms. In addition, EWTN and other Catholic media outlets broadcast the prayer service.

Several hundred people — wearing face masks and spaced at social distances throughout the shrine’s Great Upper Church — attended the event in person. More than 3,000 others from around the world followed via various internet platforms.

Other Marian shrines that have participated or will participate in the monthlong global rosary are those located in Ireland, Belgium, Algeria, Portugal, India, Bosnia and Herzegovina, Australia, France, Turkey, Cuba, Japan, Canada, Malta, Mexico, Ukraine, Germany, Lebanon, and Italy.

The overall theme for the worldwide event is “From the entire church an unceasing prayer rises to God,” and comes from the Acts of the Apostles (12:1-12) account of how all members of the church prayed for St. Peter’s miraculous escape from prison.

Each of the participating Marian shrines around the world prays the rosary for a specific prayer intention. The rosary at the National Shrine was offered for “all world leaders and for all heads of international organizations.”

“We entrust into the hands of the Blessed Virgin Mary the people touched by the pandemic and in particular for all world leaders and for the heads of international organizations, that she may entrust them to her Son,” Cardinal Gregory prayed. “May he hear and grant our petitions.”

Other intentions during the month include for an end to the pandemic, for all of humanity, for all who have died, for the sick, for pharmacists and other health care workers, for nurses and doctors and for essential workers.

Prior to the rosary, candles were lit to “represent the 50 states of our nation and the District of Columbia and (to) remind all that we have been called to pray for the end of the pandemic, and in particular at this shrine for all world leaders and for the heads of international organizations,” said Msgr. Walter Rossi, rector of the National Shrine.

“The time of pandemic has deeply affected our lives,” Msgr. Rossi said. “In this month of May, we gather around the Holy Father, who asks the entire church, to raise together with the Blessed Virgin Mary, Mother of God, supplications for the end of this trial.”

After the recitation of the rosary, Msgr. Rossi led people in praying of the “Litany of Loreto,” invoking Our Lady under her various titles, including Mother of Hope, Health of the Sick, and Comforter of the Afflicted.

Msgr. Vito Buonanno, the national shrines director of pilgrimages, also led prayers to the Blessed Virgin Mary, saying, “In the present tragic situation, when the whole world is prey to suffering and anxiety, we fly to you … and seek refuge under your protection.”

He asked Mary to “turn your merciful eyes toward us amid this coronavirus pandemic.”

“Mother of God and our Mother, pray for us to God, the Father of mercies, that this great suffering may end and that hope and peace may dawn anew,” he prayed. “Plead with your divine Son, as you did at Cana, so that the families of the sick and the victims be comforted, and their hearts be opened to confidence and trust.”

Prayers also were offered for “those doctors, nurses, health workers, and volunteers who are on the front line of this emergency, and are risking their lives to save others.”

Prior to departing the national shrine, Cardinal Gregory prayed the Memorare, a prayer seeking the intercession of Mary, asking her to “despise not my petitions, but in thy mercy hear and answer me.”

This was the third time the national shrine has participated in an international prayer effort to halt the pandemic. In addition to the May 17 recitation of the rosary and the rededication of the United States to Mary, on May 30 last year, the rosary was prayed there at the same time the pope led the rosary from inside the Vatican Gardens in Rome. That livestream was broadcast around the world.

Szczepanowski is managing editor of the Catholic Standard, newspaper of the Archdiocese of Washington.