What will she be when she grows up? 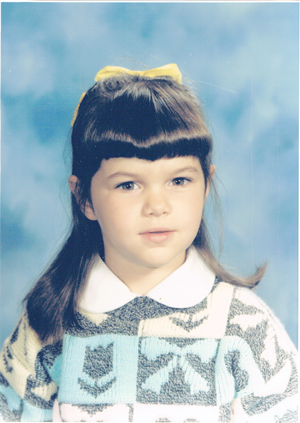 Ever since she was a little girl Debbie Comins, 25, felt at ease and at home in church. When she was a middle school student volunteering at the  library in town, she would make a detour on her walk there and stop at her parish church, St. John the Evangelist in Camden. “It was empty but I always felt safe there,” she said.

She asked her parish priest if she could become a nun and he told her to keep doing the best that she could and when she finished school she could “look into it.”

Debbie always felt close to God and had a  yearning to grow in her relationship with Him for as long as she could remember.

When she was a college student Debbie never got caught up in the party lifestyle that derails so many students. She studied theater and Spanish at SUNY Geneseo and worked on the sound and lighting aspects of college theater. While other students were out partying, Debbie was more likely to be going to Mass or  doing her best to be the person she felt God wanted her to be.

“I put it [her vocation] aside for a while,” Debbie explained. “Then when I was in my second year of college, I went to Mass and during the homily it struck me that I had put Him aside but His love was still there. I said, ‘Okay, you win.’ He offered pure love and the only response to that was to love in return.”

Debbie still had thoughts of joining a religous community and she researched a few orders that included the teaching profession. She made some visits and stayed with the sisters, but none of the communities she visited felt like the right fit for her. At that point, Debbie stopped and asked herself if she was “doing this for myself or for God” and she didn’t have an answer. Debbie went to her spiritual director and he helped her to discern what God was calling her to do. “He helped me so much,” she said. “My second year in college I promised myself to God and my spiritual director taught me to live a holy life.”

It was during college that Debbie’s lupus became a challenge. Her wrists were affected and she couldn’t take notes. She had to spend some time recovering and while she was still very much interested in joining a religious order, her medical records would sideline her ambitions. Debbie knew God was calling her to a religious vocation but once a congregation realized she was dealing with lupus, she would not be accepted. She had pretty much given up her dream to join a religious order and busied herself with her new job after college as a youth minister at Immaculate Heart of Mary in Liverpool. Debbie didn’t realize this step would lead her to her true calling.

It was while on a trip to New York City with the youth of IHM during Pope Benedict’s visit to the U.S. in 2008 that she was introduced to the Little Sisters of the Poor. Debbie met a sister while on the trip and she asked her if she had ever thought about being a nun. Debbie told her that she had tried applying to several orders but that because of her lupus, it just wasn’t going to happen. The woman religious asked her if she had considered the Little Sisters of the Poor.

“I have lupus, you don’t want me,’ I told her. I found out later she was the mother superior,” Debbie said. The nun told Debbie she didn’t think her medical condition would matter to the Little Sisters of the Poor. After her trip, Debbie said the order kept coming across her path. She researched and found the sisters’ charism was helping the elderly poor and did not feel the work was something she would enjoy. But, the sister she had met kept Debbie in her prayers and the signs kept coming. “My confessor gave me a book on the foundress, Jeanne Jugan, and said, ‘Here, I thought might like to read this book.’ That was another coincidence,” Debbie said.

Finally, Debbie arranged a visit with the sisters. “I walked in the door and immediately felt at home,” Debbie said. “At first it scared me, dealing with people who were very old. There were three people there over 100 years old. I thought, ‘Get me out of here!’ But by the second day I stopped seeing their disabilities and started seeing the people. By the last day of the visit I stopped seeing the people and all I could see was love.”

It wasn’t until Debbie met the Little Sisters of the Poor that she fully realized that she would have to not only detach herself from material things, but also to become detached from her own desires about what her religious vocation would be. “You have to detach yourself from all of your desires so you can be completely open to whatever God desires,” Debbie explained.

Debbie’s mom, Mary, had done her best to dissuade her from joining a religious order. She was afraid she wouldn’t see her daughter anymore and that Debbie might be making a decision she would regret later. Debbie brought Mary to visit the sisters when they celebrated the October 2009 canonization of their foundress, Jeanne Jugan. Mary saw the sisters’ love and kindness in relationship with the needy elderly. She saw her daughter’s comfort and joy and she came to the conclusion that Debbie was doing what was best for her.

“I saw how happy she was there,” Mary said. “I’ll miss being able to pick up little things for her when I go shopping. She won’t be at all our family events and that’s hard. But she’ll have a family there with the sisters.”

Debbie’s older sister, Judy Taylor, said Debbie has always had a calling. “I’m glad for her,” Judy said. “She has found her second home.”

Debbie’s college roommate, Lisa Striegler, is very supportive of her friend’s vocation. The two spent many nights having long discussions about religion and God. Lisa’s stepfather is a Presbyterian minister.

“I came from a very church-oriented background. We would be quizzed on the contents of the sermon on our way home from church,” Lisa said.

The two women met while  working on theatrical productions. “We were both terrified freshmen,” Lisa said. Both girls found it a challenge finding a place where they fit in and neither of them were prepared for the theater culture they found at college. Lisa said her own faith was in a transition mode during her college years, and she admitted it still is today. “Debbie was moving towards religion and I was moving away, so we had lots of talks,” she said.

Lisa said she didn’t see much of her friend during her sophomore and junior years because Debbie’s lupus, which had gone undiagnosed, was acting up. Debbie did visit Lisa while she lived with other young women in a house and then the two decided they’d live together. Lisa described her other roommate experience as “chaos” and said Debbie enjoyed visiting her when they weren’t roommates. Their senior year, though, it was Debbie and Lisa and a kitten sharing an apartment.

Lisa described Debbie as “the perfect roommate.” When Lisa nearly started a fire while honing her cooking skills, it was Debbie who took over meal preparation. When Lisa was busy working on theater productions, it was Debbie who packed up her lunch in plastic containers and delivered it to her at the theater.

“That was really tough for her because she had to give theater up because of the lupus,” Lisa said. “But she came to bring me meals anyway.”

When Lisa married last summer, it was Debbie who came to “stage manage” her wedding. “I was so glad she was there. It let me relax and not worry about all the details,” Lisa said.

Debbie was teaching religious education classes during college and she would try out her lessons on Lisa. “She never tried to convert me,” Li
sa said. “She never tried to push her religion onto me or anyone else. If you wanted to talk about religion she was all for it but she would never throw it in your face. She’s the reason why I have faith left. She’s the perfect example of someone who is not a hypocrite about their faith.”

In meeting and talking with Debbie, it doesn’t take very long before one could easily see her in a religious habit. She dresses modestly and keeps her hair in a neat pageboy. She is unassuming and obviously happy about her decision to join the congregation of the Little Sisters of the Poor.

Her co-worker at IHM, Diane Celentano, has been talking with Debbie about her vocation for some time now and she couldn’t be happier for Debbie. Diane’s son is Father Chris Celentano and she is married to Deacon Joseph Celentano.

“I really think the Holy Spirit led her to the Little Sisters of the Poor,” Diane said.

Debbie is the first to admit her surprise at finding the sisters. Most of her experience has been with young people.

The Little Sisters of the Poor live with the residents in the homes they operate for the aged and needy. There is skilled nursing available at all the sites. Debbie explained that all the sisters take shifts when a resident is close to death. “No one dies alone,” Debbie said. “The sisters take three hour shifts so their presence is always there. Three people died while I was there. You think of all the accomplishments of these people, their background.”

Debbie’s illness gives her a particular affinity for those who suffer. She knows what it is like to rely on others for help and she feels this will be a benefit when she works with the residents.

“It was the first nursing home I’ve ever been in where I noticed the residents liked being there,” Debbie said. “All my training is with teenagers but that just shows you that when God calls, He gives you the grace to go with it.”