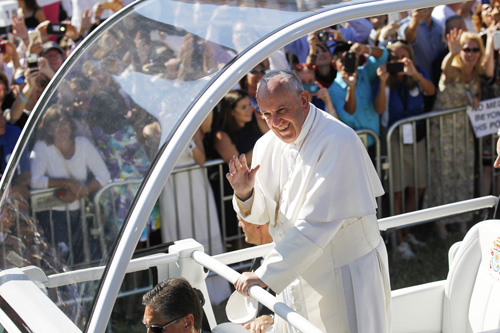 Pope Francis was officially welcomed by President Barack Obama on the South Lawn of the White House Sept. 23. Pope Francis delivered his remarks in English, speaking about justice, mercy and liberty. The president and the pontiff had a private meeting before Pope Francis took a spin in the popemobile along the Ellipse and the National Mall. The Holy Father offered midday prayer with U.S. bishops in the Cathedral of St. Matthew the Apostle, stressing the pastoral role of the bishop. He closed the day with the celebration of the Mass of Canonization of Blessed Junipero Serra in the Basilica of the National Shrine of the Immaculate Conception, where he spoke of the missionary call to bring the Good News to all people.

And what’s on Pope Francis’ schedule for Thursday? Here are the highlights:

Stay tuned throughout the day as the Catholic Sun, the Diocesan Office of Communications, and Syracuse Catholic Television bring you updates from the World Meeting of Families in Philadelphia Sept. 22 to 25 as well as up-to-the-minute coverage of Pope Francis’ travels.