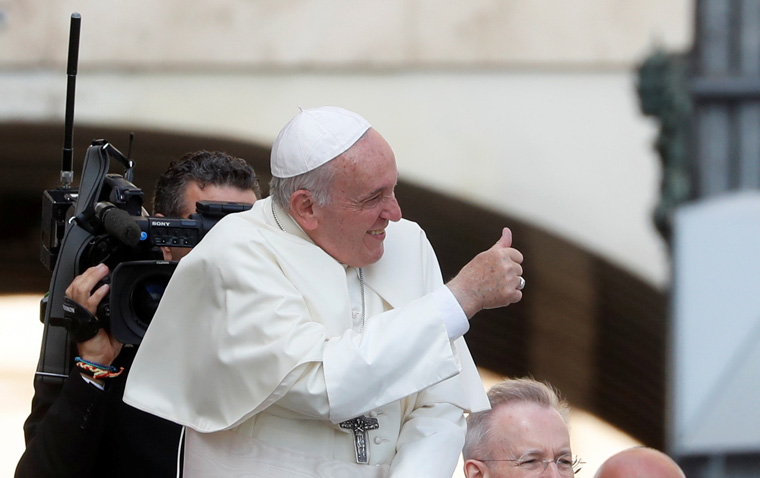 VATICAN CITY (CNS) — A person who claims to preach the Gospel by convincing people of their beliefs in Jesus is not evangelizing, but proselytizing, Pope Francis said.

“If there is no Holy Spirit, there is no evangelization,” the pope said Oct. 2 during his weekly general audience. “This can be proselytizing, advertising. But evangelization means letting the Holy Spirit guide you, that he is the one that pushes you to announce, to proclaim with your witness, with martyrdom as well as with the word.”

Continuing his series of talks on the Acts of the Apostles, the pope said that, following the martyrdom of St. Stephen, the violent persecution of Christians in Jerusalem seemingly brought the word of God “to a standstill.”

However, while persecution “appears as the permanent state of life of the disciples,” it does not extinguish “the fire of evangelization.” Instead, it “feeds it even more.”

The pope recalled the encounter of Philip, one of seven deacons chosen by the apostles, with an Ethiopian official who was reading a passage from the prophet Isaiah. After asking the man whether he understood what he was reading, the Ethiopian replied, “And how could I understand if no one guides me.”

“That powerful man,” the pope said, “recognizes that he needs to be guided to understand the word of God. He was the great banker, he was the minister of economy, he had all the power of money, but he knew that, without the explanation, he could not understand; he was humble.”

Upon understanding the words of Isaiah, the Ethiopian official seeks baptism.

This encounter, he added, is a call for Christians to reflect on the fact that “it isn’t enough to read Scripture, we need to understand its meaning.”

“To enter into the word of God means to be willing to go beyond one’s own limitations to encounter God and to conform oneself to Christ who is the living word of the father,” the pope said.

Nevertheless, the pope said, what pushed Philip to meet with the man was the Holy Spirit who is ultimately “the protagonist of the evangelization.”
Pope Francis said the true sign that a Christian is an evangelizer is “joy, even in martyrdom.”