World must not forget suffering of Ukraine and its people, says prelate 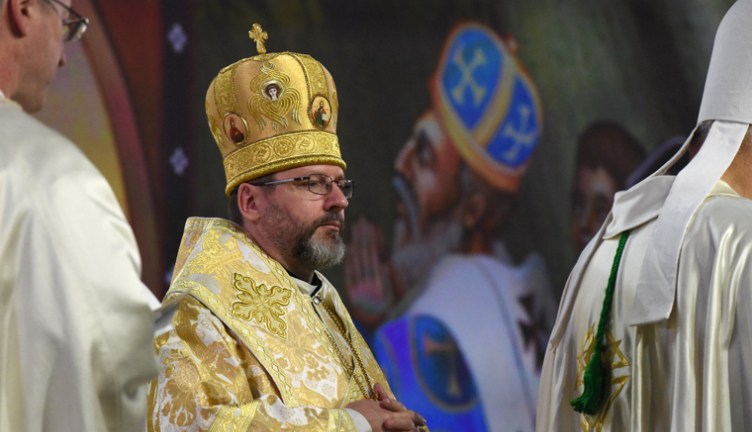 Major Archbishop Sviatoslav Shevchuk of Kiev-Halych, Ukraine, who is head of the Ukrainian Catholic Church, concelebrates Mass Aug. 8 during the 136th Supreme Convention of the Knights of Columbus in Baltimore. (CNS photo | courtesy Knights of Columbus)

BALTIMORE (CNS) — Since 2014 Ukraine “has been a victim of relentless military aggression” and suffered countless human tragedies, but now the media’s attention has shifted away from the country to other conflict zones, the head of the Ukrainian Catholic Church said in an address in Baltimore.

“We plead with the international community not to neglect Ukraine and that we not be left alone with a much bigger and more powerful aggressor,” said Major Archbishop Sviatoslav Shevchuk of Kiev-Halych, Ukraine.

He delivered the keynote address at the Knights of Columbus’ States Dinner during its 136th annual national Supreme Convention at the Baltimore Convention Center Aug. 7-9.

Major Archbishop Shevchuk, the leader of more than 5 million Ukrainian Catholics around the globe, relayed the current situation in his country and also thanked Supreme Knight Carl Anderson and all the Knights for their support and taking “a risk” to help establish the Knights of Columbus in Ukraine.

That effort began in 2011, he added, and five years ago the first council of the Knights of Columbus was established in Ukraine’s capital city of Kiev.

“Our brother Knights demonstrated courage and charity by joining hundreds of thousands of other men and women who wanted to defend their right to live in a just society where human dignity would be respected,” the major archbishop said.

Soon after that then-Ukrainian President Viktor Yanukovych led to Russia, and then unexpectedly war knocked at our doors, initiated by our eastern neighbor,” he said.

“It started at the moment when no one was ready for it; nobody knew how to deal with it — neither the newly chosen government, nor the people protesting in the streets, in Kiev and throughout Ukraine’s towns and cities,” Major Archbishop Shevchuk recalled. “It started with the annexation of Crimea in spring 2014 and continuing with the occupation of the eastern regions of Donetsk and Luhansk.”

Since then “our country has been a victim of relentless military aggression” and Ukraine has lost 8 percent of its territory due to this war,” he said.

Five million people have been forced to flee their homes in eastern Ukraine,” leaving behind all their property because of fighting or intimidating coercion,” he continued.

“The war has already claimed more than 10,000 lives and left more than 24,000 thousand people injured, with unimaginable destruction,” the major archbishop said. “Many of our brave young soldiers returning home from the front lines suffer from post-traumatic stress disorder.

“Although we do not have an exact number, we know that around 100 prisoners, including political prisoners, are denied fair and transparent trials.”

Beyond “these casualties and human tragedies,” Major Archbishop Shevchuk described “another hidden danger of the war in eastern Ukraine,” that could risk the well-being of the country and its people: “a dire long lasting ecological catastrophe due to flooded mines and contaminated drinking water.”

He said the situation would be comparable “in scale” to the Chernobyl nuclear reactor disaster of 1986 in northern Ukraine.

“Experts are warning that as many as 4 million people might be left without safe drinking water in the region,” he said.

“And notice, I am not talking about the sad events of the past — all of this is happening right now, in Ukraine, the largest country in Europe, comparable in size to the state of Texas or to the country of France.

He added: “The war, in fact, has already caused the biggest humanitarian crisis on the European continent since the end of the Second World War. And yet, this is a silent and forgotten war. Because it is a ‘frozen conflict,’ no one speaks loudly about the war in Ukraine anymore.”

So how does the larger Catholic Church in the country, and in particular the Ukrainian Catholic Church, respond “to the needs of the millions of people suffering from the consequences of war?” asked Major Archbishop Shevchuk.

“The aid provided by the church can be summarized in one word — ‘diakonia,’ that is, serving one’s neighbor, taking care of those afflicted by the war, by providing them with spiritual guidance and often with social service as well,” he said.

“Diakonia” was the main theme of the annual meeting of the Synod of Bishops of Ukrainian Catholic Church two years ago, he said.

All the bishops from Ukraine and from throughout the world “reflected on how to provide better social care to our suffering brothers and sisters who are victims of this war,” he said. “‘Diakonia’ stems from charity, and charity is rooted in disinterested love for every single person.

“Charity is an antidote to egoism and indifference. I would say that charity is also a key to understanding the success of the Knights of Columbus in Ukraine,” the prelate added.

He said the Knights of Columbus in Ukraine “have responded generously and wholeheartedly to the most basic need of Ukrainian society — service to one’s neighbor. … The order has been very instrumental in mobilizing Ukrainian men to helping people in need.”

Major Archbishop Shevchuk thanked the Knights of Columbus for the fraternal organization’s moral, spiritual and material support of the church and its people in Ukraine. He asked for continued prayers for his country.

“Our world, often called a ‘post-truth’ world, desperately needs our active involvement in the defense of truth,” the major archbishop said. “The mission of a Knight today is to be ‘the light of the world’ following the footsteps of our Savior Jesus Christ.”