150 immigrants and refugees in New York will meet pope 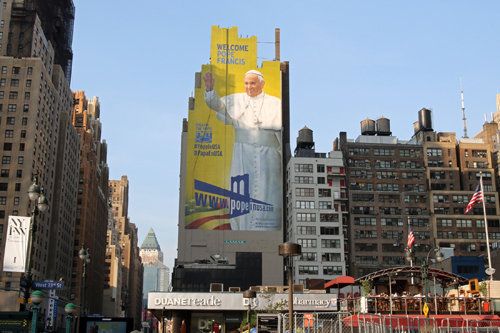 NEW YORK (CNS) — The fabric of New York is stronger because those on the margins have been given safe shelter, a decent meal and a route out of crisis by the Catholic Church, according to the director of Catholic Charities of the Archdiocese of New York, Msgr. Kevin Sullivan.

When Pope Francis visits New York, he will meet representatives of a Catholic community whose identity is tied to the biblical injunction to welcome the stranger. Specifically, he will greet 150 immigrants and refugees at Our Lady Queen of Angels School in East Harlem on September 25. They hail from Central and South America, Africa and Asia, and all benefit from Catholic Charities programs.

Msgr. Sullivan said East Harlem is the pope’s most important stop and is the perfect place to see the embodiment of his often-articulated message that the church is for the poor.

Speaking at St. Cecilia’s in Harlem on Sept. 3, Msgr. Sullivan introduced men, women and children chosen to receive the pope’s blessing. He said they include those fleeing religious persecution, unaccompanied youth, children raised and educated in the United States who are seeking citizenship, immigrant mothers and the blind and visually challenged.

“We’re not about groups. We’re about each individual made in the image and likeness of God,” Msgr. Sullivan said. “We need to be inclusive and value diversity.”

The Holy Father’s visit will “highlight what we have achieved by welcoming people not welcome in other parts of the world,” he said.

Pope Francis will be shown that Catholic Charities, through its compassionate, effective work, is fulfilling the pope’s desire to have a church that is for the poor, he said.

According to the organization’s 2013 annual report, Catholic Charities devoted $17 million to services for 36,000 immigrants and refugees.

“We visit 12 detention facilities in the New York area and help 1,800 kids a year,” he said. Many are fleeing violence, abuse and poverty in Central America. Catholic Charities provides court representation for children ages 4-18.

“This program is the tip of the spear,” Russell said.

The organization collaborates with local and national Catholic groups to strengthen laws against fraud against immigrants, including wage theft and green card schemes. “Helping immigrants is always a process of advocating,” he said.

Catholic Charities provides services similar to secular groups, Russell said, but differs from them “in how we understand it as offering a compassionate presence in the world. Because of who we are, we’re not going to go away. We’ve been doing this for a long time and that adds value you can see and feel through the generations.”

“New York is a place where transformation is possible. New York understands it is a city of immigrants, and stays true to that,” he said.

Russell said the people at the Our Lady Queen of Angels event will “help create a portrait of the migrant experience in America.” Many will wear the traditional clothing of their homelands. Several will present gifts.

In selecting participants, Russell said staffers sought “people who would find it interesting, exciting and meaningful — and who could afford to take the day off.”

Pakistani immigrant Shahid Khan will be there. Russell, an attorney, helped him win asylum in the United States.

Khan, a Muslim, worked as a Natural Family Planning trainer for the Catholic diocese of Lahore, Pakistan. His wife was also an NFP trainer and his children attended Catholic school. Because of his connection with the church and his local activism on behalf of interfaith understanding, Khan told CNS he was threatened and attacked by extremists.

Colleagues in the diocese of Lake Charles, Louisiana, helped Kahn flee to the United States in 2010. He made his way to the Pakistani community in Brooklyn and sought help from Catholic Charities in New York after unsuccessfully representing himself in an asylum hearing.

Khan has worked in construction, a gas station and a grocery store, but his primary skill is organizing people.

“My passion, my work and my soul is for my community,” Khan said. He founded a youth program in Pakistan and has developed two nonprofit organizations in New York to help preserve language and culture for Pakistani immigrant children.

Darlenys Nunez arrived in New York from the Dominican Republic just over a year ago. She came with her father and brother, joining her mother and another brother who immigrated earlier.

Nunez is a senior at the High School for Media and Communications in the Washington Heights neighborhood of Manhattan. She also attends programs at Catholic Charities Alianza Division, which provides services to children and teens.

Through a translator, Nunez told CNS Alianza helped her become a stronger person, both academically and personally. During the summer, she helped with the Alianza youth program, tutoring children and giving orientation to newcomers to New York.

She said she’s excited to meet someone who is so important to the dominant Catholic culture of the Dominican Republic. If she had an opportunity to address the pope directly, Nunez said she would thank him for his visit and the support he is giving to Hispanic culture.

At the briefing at St. Cecilia’s, Msgr. Sullivan invited people to visit CharityHasNoBounds.org, to post a greeting to the Holy Father. “We don’t want to limit his welcome to a brief time in the afternoon,” Msgr. Sullivan said.