A Father’s Day story: stepping in when the biological dad steps out 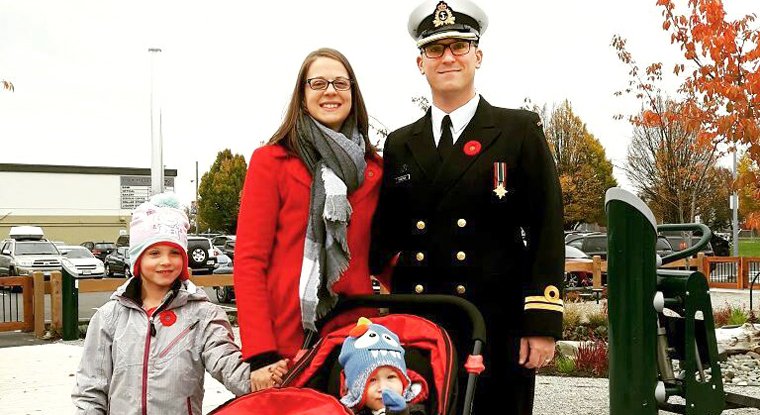 VANCOUVER, British Columbia (CNS) — Katherine Babcock was in college studying toward an arts degree when she found out she was pregnant. The child’s father, her best friend of 10 years, could not cope with the news.

“He said: ‘It’s early enough in your pregnancy. You could just terminate,'” Babcock told The B.C. Catholic, newspaper of the Archdiocese of Vancouver.
Now married with two more children, Babcock recalled the turmoil of when, after she decided to keep the baby, the young man she thought was her best friend stepped out of her life.

“You suffer one of the greatest rejections I think you could ever suffer, next to, maybe, a divorce. When you make a baby with somebody, whether it was meant to be made or not, there’s an act of love that happens there,” she said.

“There was a lot of brokenness, pain, tears, and feeling worthless, shamed and guilty, and that I was a bad person for what I did. Even though I made the decision to have life for my daughter, you carry so much of the weight of what other people think.”

“Abortion never crossed my mind. Adoption? Multiple times, but once she was born I couldn’t part with her,” said Babcock, who now works with the pro-life organization Choose Life Victoria.

For a while, Babcock and her infant daughter, Teagen, moved in with her sister, also a single mother. The moms spent four months living in a one-bedroom apartment in Calgary, Alberta, with Babcock sleeping on the couch and her baby in a playpen next to her.

“Times were tough because you have two women with post-partum depression living together,” she said. Rent was $1,000 a month, which was her entire income on the maternity pay of a waitress combined with income assistance.

After four months in cramped quarters, she moved into a tiny basement suite in the same neighborhood, with no stove and a shared laundry. Rent was $750, leaving her with $250 every month to spend on bills, food and diapers.

“I couldn’t buy food because diapers ruled out food at some point. So, I used the food bank, which is a horrible bite to your pride.”

In 2012, while living in that tiny basement, she got a call from her parents offering a free trip to visit them in Kamloops, British Columbia. There would be a reunion of the Missionaries of the Precious Blood, a missions group with whom Babcock had once served in Tanzania.

She accepted the invitation and took her young daughter. At the banquet, she recognized Tyson Babcock, a family friend who was also part of the missions group; they had dated in high school. They exchanged phone numbers and stayed in touch. Tyson Babcock, a naval officer, would fly to visit them about once a month.

As their long-distance relationship got serious, Katherine gave Tyson an ultimatum.

Tyson Babcock said his father’s example helped him work out how to be a good father, even though the child was not biologically his own. He described his father as “dependable; he’s got a lot of integrity, and he’s very loving and quick to show his love and support me and my sister when we need it,” he said.

“The idea of being a father was always positive for me, and the opportunity for me to step into an instant father role was something I embraced. There was some reservation there, obviously, but I didn’t shy away from it.”

“It takes a strong man to step into the role of a man who wasn’t able to fill it,” Katherine Babcock said of her husband.

The two shared their story just weeks before Father’s Day, June 17. In the Archdiocese of Vancouver, Father’s Day is also Pro-Life Sunday, when all parishes will have a special collection for pro-life efforts in the lower mainland.