A life of discipline in service to God and country 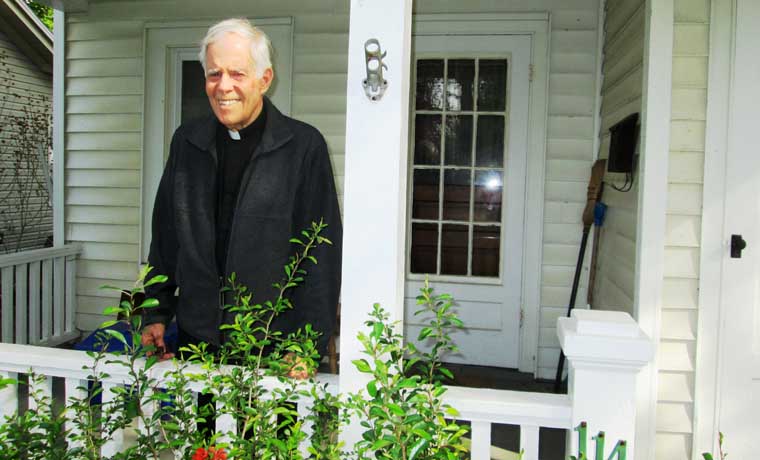 How Father Fuchs discovered that people are more important than things

Father Moritz A. Fuchs, a college man, was drafted by the Army and told he’d be given specialized duty, he recalled. The next thing he knew, he was training in a cottonmouth-infested swamp as a member of the infantry.

Did he slip into a bog of resentment as well? No, he wasn’t brought up that way.

Instead, he bravely fought in the Battle of Hürtgen Forest, served as the personal bodyguard for the chief prosecutor at Nuremberg, and commenced a 61-year vocation as a priest. He will remember people from all of those phases of his life on Memorial Day.

Recently, Father Fuchs, of Fulton, sat in his easy chair, leaned back on a “Peanuts” towel, put his hands behind his head, and answered questions about his service to God and country.

He is a person who has earned the right to wear priestly garb along with a Purple Heart, the Combat Infantry Badge, other medals, and a big patch with the number 1 on it: the patch of the United States Army’s 1st Infantry Division. Another patch is from the 26th Regiment, 3rd Battalion: the Blue Spaders.

“Quite a few people say they’ve never seen a priest with a Combat Infantry Badge,” Father Fuchs said. “There are not too many. But I became a priest afterwards.”

Father Fuchs had been studying mechanical engineering at Purdue University when he was drafted in October 1943. The Army said it would put him into some kind of specialty, he said.

“Then they switched the tracks,” he said.

Visitor: “They faked you out.”

“They dumped us all into infantry training, yeah.”

“So how come you just didn’t become a cynic for the rest of your life?”

“Life is full of those pratfalls, and all of those problems,” he said. “You just walk over them, yeah. Life is more than regrets. I hadn’t thought of it that way but I’m sure there are a lot of other experiences in the army and outside of the army that are, again, perverse.”

The key for Father Fuchs in moving past the perversities of life has always been to do the next good thing, and do it right away without pausing to reminisce.

But first there was the Battle of Hürtgen Forest to get through. His lifelong philosophy of “Keep moving” served him well there too. “We saw a lot of my buddies get killed,” he said.

“We had 30,000 battle casualties in Hürtgen Forest,” he said. “That was before the Battle of the Bulge.”

He lost dozens of friends in the battle east of the Belgium-Germany border.

“Survival was the key,” he said. “If you can survive that nonsense, you learn quickly: War is hell, war is stupid.”

In his filmed description of the battle for the Library of Congress’ Veterans History Project (https://vimeo.com/159123928), Father Fuchs notes that the Germans were clever in Hürtgen Forest. They were well-hidden, they knew the location very well, and they had pillboxes on the side.

It was wet, cold, and snowy, and the American tanks got bottled up. The Germans were zeroed in, throwing 80mm artillery pieces that clipped the tops of the trees and exploded, sending steel shrapnel all over the forest floor.

Pvt. Fuchs found the lifeless body of one of his buddies on a pile of bodies. “My buddy!” Father Fuchs said.

“You realize very well that could be you,” Father Fuchs said. “It’s like you only got 5 minutes, 10 minutes left in your life, what do you do? Do the right thing.”

“Everybody in our squad got either wiped out or injured,” Father Fuchs says on the Veterans History Project video. “It didn’t make sense. Meat-grinder.”

Father Fuchs himself was injured in the battle, suffering a broken leg. The doctors dug the shrapnel out, but the leg resisted healing. Eventually it did heal and three months later, he was back in the same battle in the same forest.

His unit had advanced into Czechoslovakia when the war in Europe finally ended in May 1945.

Again, Father Fuchs moved on. He did not dwell on the horrific firefights of the war. He simply did the next good thing.

In the summer of 1945, he took “a most amazing assignment”: serving as the 24/7 bodyguard for the chief United States prosecutor at the Major War Criminals’ Trial in Nuremberg, Germany, Robert H. Jackson. Father Fuchs appreciated the “touch of civilization” that he encountered as he met people from France and England in Nuremberg.

The bodyguard job turned into a yearlong assignment. Prosecutor Jackson was also an Associate Justice of the U.S. Supreme Court.

Jackson quickly gained confidence in him, especially when Bodyguard Fuchs was the only one in the group who actually shot a deer when they went hunting. Jackson, an outdoorsman, did the honors of gutting the deer.

During the trial of the major Nazi war criminals, Father Fuchs, who turned 20 during his service there, always was within half the width of the courtroom of Jackson.

Father Fuchs could have gone home during the trial (he had enough credits under a points system), but he declined, because he knew it was a golden assignment to be Jackson’s bodyguard.

That’s one of Father Fuchs’ lessons: Don’t live your life by a points system. Pay more attention to the opportunities.

“Some things matter more than others,” he said. “Prioritize values; that’s where eternal life comes in. That should be the first priority. Know that this is not the only life.”

Father Fuchs was promoted to private first class after the war ended. He was promoted to staff sergeant during the trial. He left Nuremberg before the sentences were handed down. He flew back to the United States with Jackson in August 1946, and he stayed overnight at Jackson’s home in McLean, Va.

At Nuremberg, Father Fuchs had seen all the evidence of the Nazis’ torture and murder of their victims. Once again in his life, he moved past that dark time by recognizing an opportunity.

He did not go back to Purdue University to continue his mechanical engineering studies, though.

“Well, I saw so much death and destruction and damage,” he said, “that I thought, ‘I’m not going back to my studies.’ My studies had been for mechanical engineering at Purdue, and I decided, well, people are more important than things.”

So it was on to the seminary in September 1946. These days, Father Fuchs  is retired but he helps out at Holy Trinity Church in Fulton.

He is friends with Gregory L. Peterson, the co-founder and past president of the Robert H. Jackson Center in Jamestown, N.Y. Justice Jackson was from Jamestown, and Peterson has always admired Nuremberg’s chief prosecutor.

Over the years, Father Fuchs has visited the Jackson Center to give talks.

“This is a perfect Catholic story,” Peterson said of Father Fuchs.

In his life, his teachings, and his humility, Peterson said, Father Fuchs “is the embodiment of the legacy of Robert Jackson. And to me he’s a living legend.”

Dates said Father Fuchs is a great man and a “good example of how to live your life in service to your fellow man, both in the military and then in the priesthood.”

Louis Gilbert, past commander of Hannibal American Legion Post 1552, said Father Fuchs is very good at helping people out if they are having problems and “just plain being a wonderful person.”

Joseph R. Messineo, a senior vice president for Key Bank, served as the interviewer for the video of Father Fuchs, and Mark Whalen served as the videographer/editor.

“Their stories are sacred,” he said. “They’re absolutely sacred.”

Asked about the power of his life, Father Fuchs said, “I never thought of myself as having any power; I just had responsibilities for this or that.”

He added: “Nobody’s supposed to live up to my values. We’re all supposed to do what God wants us to do. I don’t set myself up as a model.

On Memorial Day Father Fuchs will honor the memory of “anybody who stood up for what is right. And good.” That includes these people:

His parents, Moritz and Anna, and his two sisters, Rita Anne and Gertrude, who served as Dominican nuns (his brother, Joseph, still lives in the state of Washington); his Hürtgen Forest platoon leader, who taught the platoon how to dig foxholes with logs over the top in the woods to get protection from the shrapnel; Justice and Prosecutor Jackson, for his integrity, his knowledge, and his friendship; and Father Harold J. Flynn, his beloved Fulton pastor who brought him out to the seminary after he arrived home from Nuremberg.

Father Fuchs will also give thanks for being in “fairly decent health, too, that’s a blessing. And I have no difficulty giving thanks to God for being so good to me.”

“Being a survivor is a GREAT honor,” he said. “Being alive.”