A missionary for ‘dangerous and desperate’ locales 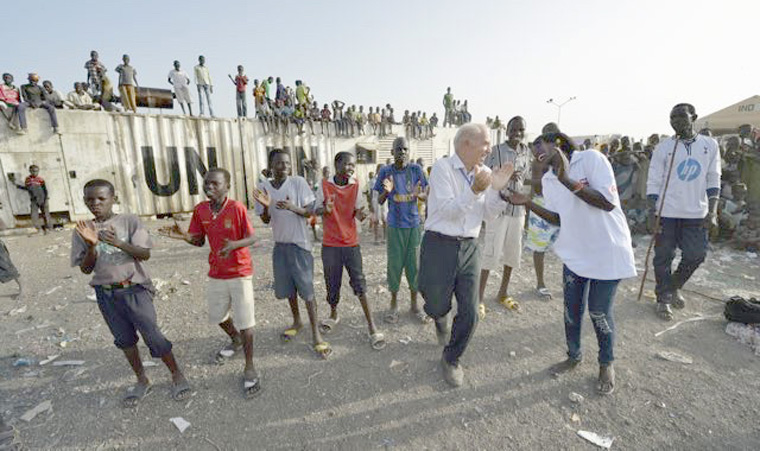 Father Michael Bassano pastors those in need in South Sudan

The New Year’s exhortation that popped into Father Michael Bassano’s head in 1986 was terse: “Go to Maryknoll.” He answered the mysterious call, and 32 years later, his heart still sings for people in need in faraway lands.

Father Bassano, originally from Binghamton, is back in the United States for two months of home leave from his post pastoring and encouraging the hungry, displaced persons of South Sudan, a country struggling from civil war. In the past he ministered to people in Chile and Thailand.

The Maryknollers go on furlough once every three years. First, Father Bassano, 69, reports for a health checkup at Maryknoll headquarters in Ossining, north of New York City. Next, he rests up and visits family and friends. Then he gives a mission talk at four upstate churches. He asks for prayers and donations to help the  people in the United Nations camp where he has served since 2013.

“How would you characterize someone whose life has been a series of moving to increasingly more dangerous and desperate locations?” wrote Deacon Paul Bork, director for Mission Education and Promotion for the Northeast Region of Maryknoll. “You may characterize him as a priest who follows in the footsteps of his master, Jesus Christ.”

‘CAUGHT IN THE FIGHTING’

Doing so, Father Bassano sometimes has to move fast. The civil war broke out on Christmas Eve 2013 while Father Bassano was living in the northeastern South Sudan town of Malakal; there was no UN POC (protection of civilians) camp yet.

“Three sisters and myself were caught in the fighting around us, because our house was right in front of the military barracks,” he said. They hid in the safest place in the house, the guest bathroom, because the only opening was a small window at the top. When the fighting paused, they managed to get to the food elsewhere in the house. They were evacuated out after four days to Nairobi, Kenya. “So that was my introduction to South Sudan,” Father Bassano said.

A counselor told him that if he felt dread of going back to Malakal, don’t go. But he did return, and in 2015 fighting erupted in the Malakal area again, “and you could see the bullets flying all over the area, not getting close to us. …

“I remember one time, I was walking home from camp, and I’ve never had this experience where I heard something whizz over me — w’shhhhhh — I think it was a bullet, something. And immediately I fell to the ground. Instinct — you fall to the ground, and then there was a guy in front of me, and he did the same thing.

“And then when it was quiet we both got up and started running. Now, he was far ahead of me — I outran him. I outran him. And he was a young guy, I’m in my 60s. We got right into the camp. It might have been just a stray bullet, it wasn’t anything more than that, but, boy, when you hear that, you just go right to the ground. I said, Boy, my adrenaline was very high that day. It’s the instinct to survive.”

Then in 2016 there was an attack on the camp. At the time, Father Bassano was at a meeting in Juba, about 300 miles south of Malakal. Twenty-six people were killed, and fighters burned down all the tents of one tribe. Almost one-half of the camp was burned to the ground. Incredibly, none of the churches were burned down or looted, but it was a tragic, stressful time.

“I felt this is going to happen again,” Father Bassano said, “and how much more can these people take?”

The majority of the 28,000 IDPs (internally displaced people) in the camp are Catholics. There are 15,000 people between the ages of 5 and 17. The people live in close quarters, mostly in tents; some have been able to find zinc or copper for a roof. “A fruit of Father Mike’s ministry is the 85 camp residents whom he baptized during this year’s Easter Vigil,” Deacon Bork wrote.

The displaced people are given basic commodities: enough food to last for a month. Each family gets a 50-kilogram bag of a wheat-based powder the people can make meals with. They also receive vegetable oil and a cereal mix that is used for the children. The people also have access to purified water and medical clinics. Still, Father Bassano said, “One of the difficulties is the question of hunger. There is not enough food to eat.”

A PRECIOUS BAG OF RICE

Father Bassano quoted an elderly woman who received a bag of rice for her family:

“Please tell the Catholic people in America for donating money to help buy food for us, how grateful I am for the rice that shows that you have not forgotten us. This is the first time in three years that I have been able to eat rice.”

Father Bassano is buoyed by African hospitality. He visited the house of a family — a mom, three girls, and a boy — that lost its father to the civil war. “They give you some tea or whatever they have,” he said. “They give you a piece of bread. And sometimes I don’t want to take their bread because I know they don’t have enough. But they say, ‘No, you have to eat! For you!’”

The 11-year-old boy in the family took Father Bassano’s hat outside to wash it and sang songs in Arabic. “And when he was finished singing and washing the hat,” Father Bassano said, “he said this phrase in English, which surprised me. He said, ‘We are all the one family of God.’ That’s exactly what he said.”

The African bishops use that phrase, and so does Father Bassano at Mass in the UN camp. Some people in the camp speak English, but they also speak Arabic and tribal languages. Although he has learned Spanish, Thai, and Kiswahili, he is not fluent in Arabic, so the catechists serve as translators.

Down the road, in the Humanitarian Hub, Father Bassano gets up at 4:30 a.m. daily. One of eight men living in a tent where the air conditioning works at night but not so well during the day, he removes the mosquito netting over his mattress and rises to make sure he is first in one of the four outside shower stalls. Sometimes there is good hot water.

By 5:30 a.m., he walks about a kilometer and half to a section where he can get some food. After finishing  breakfast by about 7:30 a.m., he walks to the camp. He visits the Doctors without Borders hospital, the International Medical Corps clinic, and the Indian hospital.

By 11 a.m. he walks into where the people are living to see if there are any difficulties. By 12:30 p.m., he is back in the cafeteria of the area that houses the United Nations staff.

By 1 p.m. it is so hot that he has to wait for a few hours. In an ecumenical chapel modified from a shipping container, he puts a blanket on the floor to rest, read, or write for a couple of hours.

Around 3 or 3:30 p.m., he walks among the people of the camp again: “being present to the people.” The Catholic church offers activities from 4 to 7 in the evening every day: meetings for liturgy, choir, drama group, the Legion of Mary, parish council meetings. Sometimes there is a 4 p.m. funeral.

WHAT’S IN YOUR HEART?

Years ago, when Father Bassano sought permission to do missionary work on a permanent basis, a Syracuse Diocese official asked him: “What is in your heart, Mike?” Early in his ministry, Father Bassano, who was ordained in 1975 by Syracuse Bishop Frank J. Harrison, had served the Syracuse Diocese in Utica and Binghamton. But the martyrdom of four Catholic missionaries and San Salvador Archbishop Oscar Romero  in El Salvador in 1980 put the idea of missionary work in Father Bassano’s heart. He was incardinated into Maryknoll in 2000.

During his current furlough, Father Bassano has visited his nieces; other relatives; his older brother, Ted; high school friends in Binghamton; friends from his former parishes; and friends in Seattle who worked with him in Thailand. He has spoken about his Maryknoll mission at Holy Trinity Church in Utica, St. John the Baptist in Lockport, and St. Joseph–St. Patrick in Utica. On the weekend of June 30, he will speak at all the Masses at St. Daniel in Syracuse.

Father Bassano said Maryknollers’ philosophy is to go to a place where they are needed but not wanted, and stay until they are wanted but not needed. He is discerning whether he is still needed at the UN camp outside Malakal. When he returns to South Sudan in early July, he will consult with the group Solidarity with South Sudan, which represents Catholic congregations such as Maryknoll, Franciscan, and Salesian. One possibility might be working with fellow Maryknollers at a refugee camp in Uganda.

But first, he will be speaking to the people of St. Daniel Church. He will tell them: “I thank God that we are all part of the missionary activity of the Church wherever we may be, to be a sign of Christ’s love and compassion.”