A society of apostles on fire with God’s love 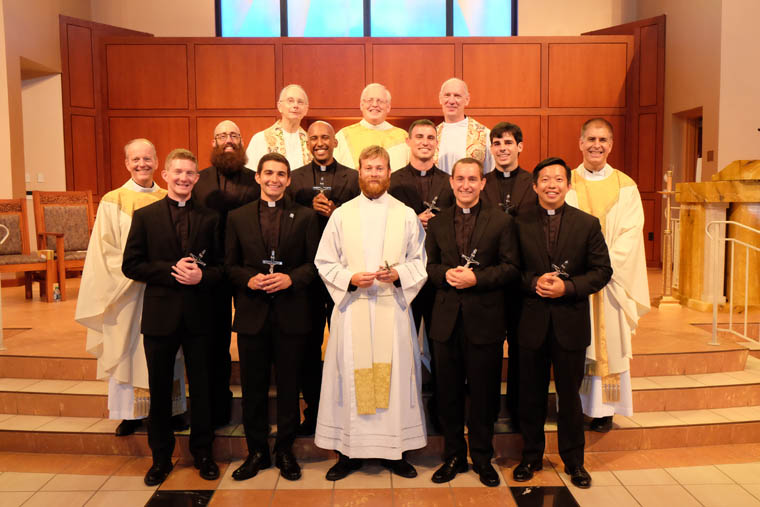 One by one, nine men knelt Saturday and pronounced their vows to the Society of Jesus, publicly binding themselves to perpetual lives of poverty, chastity, and obedience as Jesuits.

“Almighty and eternal God, I understand how unworthy I am in your divine sight,” each of the men read to a silent, attentive crowd at Holy Cross Church in DeWitt. “I humbly ask that you judge this total commitment of myself acceptable. As you have freely given me the grace to make this offering, so also may you give me the abundant grace to fulfill it.”

Their profession of first vows followed two years as Jesuit novices of the Maryland and USA Northeast Provinces. They and novices professing vows in other U.S. provinces Saturday join a worldwide Catholic community that has seen an increase in vocations since Cardinal Jorge Mario Bergoglio became Pope Francis in March 2013.

A year into Francis’s papacy, U.S. Jesuit regional vocation offices reported increases in vocation inquiries ranging from 67 to 116 percent, according to America, a magazine published by the Jesuits. Nationwide, the order has seen a 65 percent increase in vocation inquiries, the USA Northeast Province reported in their 2015 annual report.

There are about 17,000 Jesuits worldwide, down from a peak of 36,000 in 1965. The largest Catholic men’s order dates to 1540, when it was founded by Ignatius Loyola, a Basque soldier who underwent a religious transformation while recovering from war injuries.

Jesuits have been in Central New York since the 1650s, when Simon Le Moyne, the namesake of Syracuse’s Le Moyne College, ministered to Haudenosaunee (Iroquois). About 20 Jesuits now live at Le Moyne College, and the St. Andrew Hall, the Jesuit novitiate for the region, is at Le Moyne.

The novices who professed vows Saturday participated in the 30-day Spiritual Exercises of St. Ignatius Loyola, learned Spanish, and worked with the sick and dying at Calvary Hospital in the Bronx. In the Syracuse Diocese, they ministered at sites including Bishop Ludden Jr./Sr. High School, Cathedral Academy at Pompei, Catholic Charities, Francis House, and the Spiritual Renewal Center.

The men will spend the next three years in academic studies. Jesuit formation takes nine to 12 years.

“You have heard a promise from the Lord, and that promise has spoken to your deepest desire,” Father Robert M. Hussey, provincial of the Maryland Province of the Jesuits, said during the homily. “Today you are choosing to trust that promise.”

Following God will be “lived out on a path we cannot predict,” Father Hussey said. “It’s a promise, not a road map. If we keep listening, we will continue to hear that promise.”

One prayer during the liturgy praised God for the life of St. Ignatius, “so that his love for Jesus might inspire the hearts of many to seek your greater glory” and “provide your church with a society of apostles on fire with your love.”

St. Ignatius is said to have ended his letters to Jesuit missionaries with the phrase, “Go, set the world on fire.” It’s also a common wish at Jesuit school graduations.

“Our provinces are delighted to have you and can’t wait to send you out on your first missions,” Father John J. Cecero, provincial of the USA Northeast Province of the Jesuits, said as the church exploded with applause. He then thanked the more than 100 Jesuits, dressed in white vestments and concelebrating Mass. “You are a visible sign of support and brotherhood,” Father Cecero said.

The Mass was extremely moving, said Father James Martin, editor at large for America magazine and a well-known media commentator on Catholic issues. He traveled from New York City to attend the Mass. “It reminds me of my own vows, as it does for all the Jesuits here,” Father Martin said. “It’s a way to renew your own promise to God.”

Father Martin was Le Moyne’s 2011 commencement speaker and has authored several popular books on Catholic issues, including My Life with the Saints (Loyola Press, 2006) and The Jesuit Guide to (Almost) Everything: A Spirituality for Real Life (Harper One, 2010).

Father Martin is very active on social media, with more than 74,000 followers on Twitter and more than 464,000 on his Facebook page. He’s also known as the “official chaplain of the Colbert Nation” for his frequent appearances on “The Colbert Report,” a former Comedy Central talk show.

The Sun spoke briefly with Father Martin after the vow Mass. Below are excerpts of that interview, edited for clarity and brevity.

So is there a Francis effect among the Jesuits?

No doubt. Our novitiate in the Midwest has 31 people and they had to buy a new house. The novitiate in California had to put on a new wing. It’s been three years since Francis became pope. That’s about the time it takes to make a decision. These young men have been influenced by Francis.

What is it about Pope Francis that is drawing novices to the Jesuits?

It’s the Holy Spirit, of course. But he’s making the Jesuit charism more well known. Young men are inspired by that. People find him accessible and prayerful and energetic. That connects with young men. They can trace those things, and his sense of joy, back to the Jesuits.

How is the Francis effect playing out in the broader church?

There are so many bad things happening here and across the world. How do people not get overwhelmed and stay focused?

Without addressing specific issues, what advice do you have for people during this divisive presidential season?

You look at the Gospels, you look at church teaching, then you decide through your conscience. That’s what Francis says.

You’re a whiz at social media, but not all clergy have embraced it. What do you say to people who either fear the technology or think it’s a waste of time?

It’s going where the people are. People are looking for direction through social media. Why not go where they are? In today’s Gospel, Jesus tells Simon, “You will be fishers of men.” He doesn’t talk to them as a carpenter, he talks to them as fishermen, which is what they are. You can use the language of young people on Twitter and Facebook and connect with them.

One last question: Stephen Colbert. Is he as cool in person?

He’s even cooler. And even more Catholic.