A survivor’s tale: off the ground and into the boardroom 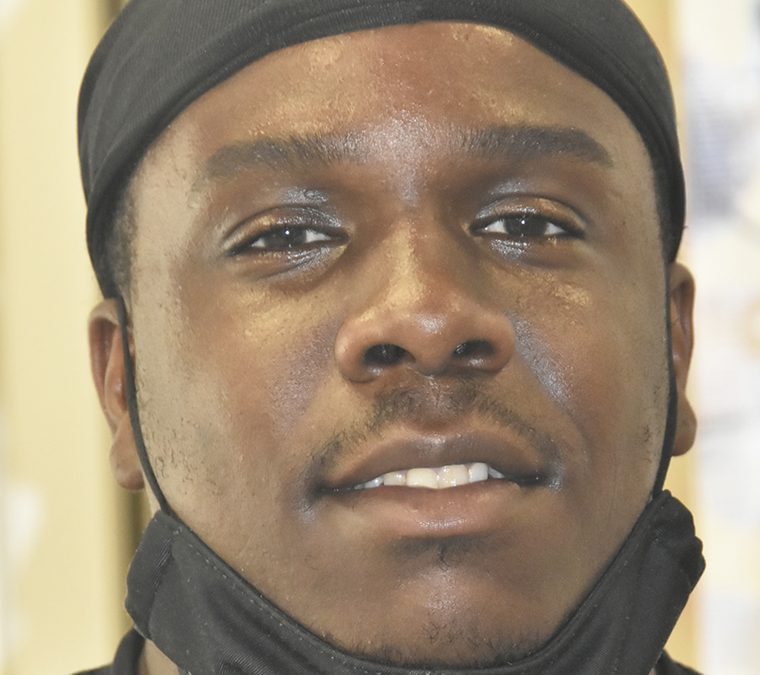 Steeped in what may be called “Bradyness,” he chose forgiveness when he was shot.

“I’ve been going to Brady [Faith Center, named for the late Msgr. Charles Brady] my whole life,” ever since I was a little kid,” said Zakeem Rutledge, 29, who works at a new ministry of the faith center—Brady Market in Syracuse.

On March 19, 2012, Rutledge was walking to a store in Syracuse when someone [to this day he does not know who it was] in a car behind him starting shooting “at somebody else, and I mistakenly got shot.”

He had been shot twice, and his legs gave out on him. “I was fallin’ to the ground,” he recalled. “I had my phone in my hand. I dropped my phone, but I caught myself so my face wouldn’t hit the cement. And I was just lookin’ around. … Everybody was running. … I just grabbed my phone and called 911 and told them I’m shot, come get me.”

People told him, “‘Get up!’” He couldn’t move his legs, and people over him were crying, he said, “and I’m just layin’ there tellin’ everybody I’m gonna be OK. I’m good.”

He was paralyzed from the waist down for three days. One night in the hospital, he said, “they prayed over me, they left, and at that moment I said: ‘Thank God I’m alive.’”

On the third night, he had a conversation with God; he looked outside and saw “two moons in the sky.” Shortly after seeing that,  he said, “a warm feeling came over my body, all through me. And they had compression pumpers on the legs so I wouldn’t get blood clots. It was irritating me. I started moving my legs to get them off.”

On his sixth day in the hospital, he declined medicine, took the walker and walked to the door. “On the left it’s a short hallway; on the right, it’s the long one,” he recalled. “Which way you think I took? I went the long way.”

“Took me about two years to get on my feet fully functional without a cane or any device,” he said. “But the biggest part of this story is forgiveness. You know, in life we go through things and people do us wrong, and it’s hard to forgive them, you know. I chose to forgive them, and the reason why is so I could move forward in life. I got shot, it happened to me, I accept it, but I’m not going backward. … I’m movin’ forward. … I am a survivor.”

He is also an employee with responsibilities: In addition to being the closing manager, Rutledge monitors the inventory and serves as a peer leader and trainer at Brady Market, which held its grand opening in June at the corner of Gifford and West streets. The market employs community residents who need a first, second or third chance in life, and every dollar spent there increases programming in the community. Offered are paying jobs, access to healthy and affordable food and social supports under one roof: case management, mentoring, therapy, learning circles, tai chi, yoga, meditation and Zumba.

Rutledge gets a sense of accomplishment working at Brady Market. He said other jobs can be “work, go home, work, go home. But here it is home.”

The priest for whom the Brady Faith Center is named was honored with the title of Right Reverend Msgr. Charles Joseph Brady by Pope John XXIII on April 16, 1960.

Msgr. Brady “was a person for others; he was always giving of himself,” says the late Auxiliary Bishop Thomas J. Costello in a video at bradyfaithcenter.org/about/. Bishop Costello notes in the video that Msgr. Brady died in March 1978 while shoveling snow in front of Bishop Costello’s garage—“always reaching out, doing something for other people.”

Rutledge showed his own giving nature when he volunteered in 2015 at Brady Faith Center. In 2016 he officially became the BFC van driver; 2017-2018, he became a maintenance worker there; 2019, the youngest member of the BFC Board. These days, he volunteers at BFC on Sundays and goes to Mass there. And as a paid worker at Brady Market, he participates in tai chi, guided meditation and the men’s group, which he has led a couple of times. “With the stuff that I’ve been through,” he said, “I can guide some of the young fellas from the community.”

Rutledge had told Kevin Frank, the executive director of BFC, about seeing two moons that night when he looked outside during his hospitalization.

Frank said in an email: “Zakeem has experienced just about everything a human person can experience in this lifetime. Through his suffering and hardships, he has experienced the presence, light and love of God. After he was mistakenly shot and lying in the hospital bed, paralyzed from the waist down, he shares that he looked out the window and saw two moons. My reflection to him was that in that moment, he needed to experience an added/extra amount of Hope and Light in the Night. God is with us!”

Father Clifford H. Auth, JCL, a member of the BFC Board, said in an email that Rutledge “is an outstanding individual and an inspiration to all with whom he shares his story. More than most, Zakeem has experienced the injustices of life and yet instead of becoming bitter, apathetic or vengeful he has become more forgiving, hopeful and determined.

Rutledge remembers being the only child of a single mother in a fixed-income household, and he acknowledges his past hardships and struggles. “My story is about the triumph of going through childhood tribulations,” he said, “and overcoming … obstacles and breaking barriers.”

He said he is the second in his family to graduate from high school and the first to go to college. He has one semester left at Onondaga Community College, where he is studying art—“art is therapeutical for me. … I love art.” He said he can draw, paint and work with pottery, and he even plays the guitar; he wants to be an art-therapy teacher and perhaps down the road have an art gallery.

Asked to explain his recovery, he said: “Living testimony.” Regardless of what a person goes through, he said, it is important to be mentally strong—“put God first, and you will get through it.”