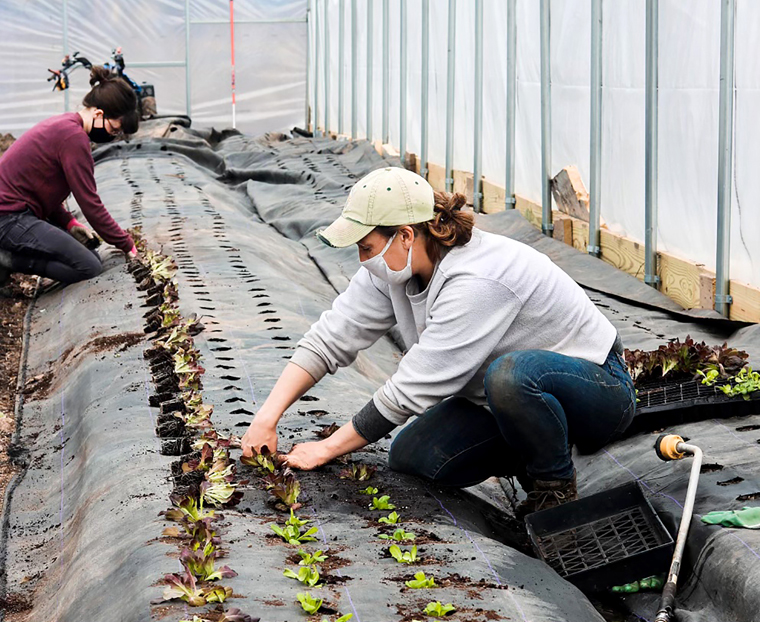 Brady Farm next to Onondaga Creek in the Valley of Syracuse has been growing things all winter thanks to some hardy outdoor plants and many others inside greenhouses.

With help from a grant from the Mother Cabrini Health Foundation, the farm (bradyfarm.org) recently held online cooking classes to remain a neighborhood force for good during the coronavirus pandemic.

“Each person received a box of produce and ingredients to make the meal, and they learned how to prepare the meal together with guidance from Keonna Yearwood,” the farm’s outreach coordinator, said Brady Farm Coordinator Jessi Lyons. “The program was very popular, and we plan to continue this in 2021.

“We also worked with the Syracuse Diocese to provide low-cost produce boxes for families at Cathedral Academy twice a month.

“This year we also have the third high tunnel (greenhouse), which will give us much more produce early this summer, and through next winter.”

“That’s another game-changer for us, which extends our growing season and increases our volume of products,” said Kevin Frank, executive director of the nearby Brady Faith Center, which oversees the farm.

Since 2016, the farm has served the neighborhood with nutritious foods, jobs, and education. Growing now are over 50 kinds of vegetables and well over 70 varieties of veggies. All the money from sales stays in the community.

Soon there will be openings for a market assistant and a farm assistant, “and we’ll have youth from CNY Works,” which strives to bring businesses, job seekers, and training providers together. Also, some of the trainees from the soon-to-open Brady Market will visit the farm and learn about production practices and food safety.

The farm has four prongs for selling its crops, which include flowers:

• The new Brady Market that is projected to open in May at the former Nojaim Bros. Supermarket at the corner of Gifford and West streets on the near-southwest side of Syracuse.

“We plan to sell our greens, tomatoes, herbs, and the vegetables that are seasonally abundant, like zucchini and cucumbers,” Lyons said. “Though more of our products will show up in the catering menu and hot-food section” of Brady Market.

One hundred kids from PEACE, Inc., a nonprofit that works to help people in the community realize their potential for becoming self-sufficient, came over and helped to plant beets and spinach on a recent day when it was about 65 degrees outside and about 20 degrees warmer inside one of the greenhouses.

The advantage of a high tunnel, Lyons said, is “that we can grow in it all year long. So things like the summer crops get started a good four weeks early and then also can go an extra four weeks longer, so we get at least six extra weeks out of any given crop. But they’re also more productive than what you get in the fields,” where about 4.5 acres are under cultivation this year.

A sight to see in May

Outside in the field, a row of spinach survived the winter growing under a long white mini-tunnel that provided frost protection. Also outside is crimson clover (currently green), a cover crop that provides forage for bees. “It’s beautiful if you come in May,” Gallagher said, adding that it will be like “‘amber waves of grain.’”

Although Gallagher noted that temperatures in late winter/early spring have been “all over the place,” crops that are already growing include spinach, arugula, leeks, lettuce, tomatoes, eggplants, beets, peppers, Mexican sour gherkin, broccoli, yellow onions, garlic, tulips (no petals yet), and Utica greens.

“Oooo, yum,” Gallagher said, “I love having Utica greens on my lettuce.”

“Mushrooms are moving through the ground, slowly,” she said, and they will also pop out of logs that have been implanted with mycelium.

Summer vegetables will be planted in the middle of April, so things like cherry tomatoes will be ready in early June.

A visitor noted that Brady Farm grows the best cherry tomatoes he has ever had; they came from a compost pile — some special magic.

Get your Brady Box Brady Box CSA (community-supported agriculture) subscriptions are offered at Brady Farm, 150 Ford Ave., Syracuse. The CSA operated twice a month through the winter; it runs through April. Most of the winter product was not from Brady Farm; some was bought wholesale from Russo Produce Co., Syracuse; when possible that food was supplemented with either Brady Farm products or other local farm products.

Now, Brady Farm is transitioning to more of its own products or other local farm products; come late May, it will be pretty much all Brady Farm products. In May, the CSA will operate weekly; those boxes are $25; you sign up by the week until the summer CSA commences: June 6 to Oct 23, either 10 or 20 weeks.

Subscribers to a Farmstand share can pick six items: a box of Brady-grown produce, or a box of items including Brady and non-local items, which may include other special items that can’t be grown locally. They range in price from $150 to $450. Also offered are flower shares for 7 or 14 weeks.  The Brady Farmstand will be open 9 a.m. to 1 p.m. every Saturday starting the second Saturday in June.