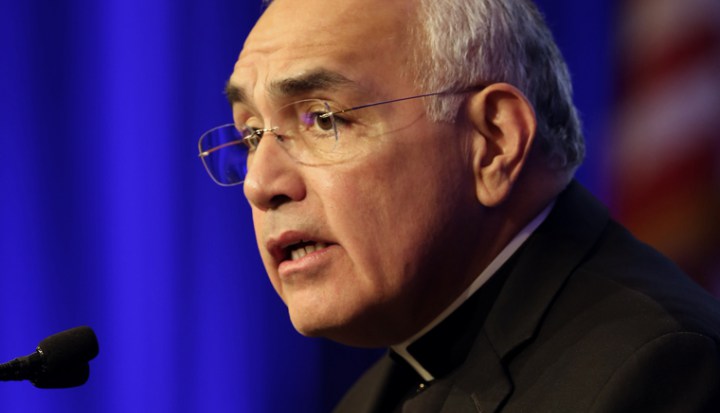 Bishop Joe S. Vasquez of Austin, Texas, chairman of the U.S. bishops’ migration committee, is pictured in a 2017 photo. In a Sept. 18 statement, Bishop Vasquez said, “The announcement of the presidential determination is deeply disturbing and leaves many human lives in danger.” (CNS photo | Bob Roller)

WASHINGTON (CNS) — Advocates for refugee admissions into the United States decried what one statement called a historically low cap of 30,000 for fiscal year 2019, which begins Oct. 1, and asked Congress to work with the Trump administration to more than double that number.

Secretary of State Mike Pompeo released the number Sept. 17. A group of advocates, on a Sept. 18 conference call with reporters, said the number had been issued without consulting Congress, which is required by law. That has led to hope that Congress can persuade the administration to increase the number.

With just days left in the current fiscal year, the administration has processed only 20,918, less than half of the fiscal 2018 allotment, said Jen Smyers, director of policy and advocacy for Church World Service.

“Our hearts are at least big and wide enough to welcome 75,000 people into the country,” said Mary Giovagnol, executive director of Refugee Council USA, on the conference call.

Smyers said there is a basis for the larger number. “We have, right now, enough refugees who are approved or far enough in the security check process to be far greater than 75,000,” she said.

The low numbers hurt the United States in more than one way, according to Scott Cooper, director of national security outreach for Human Rights First.

“It’s been so helpful and strategically for us through many, many years. The people who are fleeing these conflicts are the victims of these conflicts. They are not a threat to us,” said Cooper, who served 20 years in the Marines.

“We are welcoming the victims of these conflicts,” he added, noting the humanitarian nature of refugee admissions. “If we’re turning our backs and closing our doors … we’re harming ourselves and shooting ourselves in the foot, quite honestly.”

The 30,000 figure is “deeply disturbing and leaves many human lives in danger,” said a Sept. 18 statement by Bishop Joe S. Vasquez of Austin, Texas, and chairman of the of the U.S. bishops’ Committee on Migration.

“To cut off protection for many who are fleeing persecution, at a time of unprecedented global humanitarian need, contradicts who we are as a nation. Offering refuge to those fleeing violence, torture, or religious persecution is a cornerstone of our history. We as a country are blessed with vast resources making us capable of securely welcoming those fleeing harm,” Bishop Vasquez said.

“Congress should strongly urge the administration to return to a refugee admission level that reflects local community response and support of refugees, global refugee protection needs, and our long history of compassionately welcoming refugees,” he added.

“I’m not going to tell you anything you don’t know, but remind you of everything you know to be true In the Abrahamic tradition,” said Lutheran Bishop Michael Rinehart, chair of the board of directors of Lutheran Immigration and Refugee Service. “There is a charge to care for the stranger; who for any reason cannot go home.”

The Bible is filled with “the story of migration, the exile from the Garden of Eden, Abraham and Sarah, the Israelites fleeing slavery in Egypt for a new life,” he said. “But due to migration it’s (the Bible) filled with rules on how immigrants are to be treated. It’s not a minor thing in the Bible. ‘Love them as yourselves, for you were once strangers in the land of Egypt.'”

In the New Testament, “Jesus, Mary and Joseph flee Herod’s persecution into Egypt. Jesus tells of a Judgment Day: ‘When I was a stranger you welcomed me. … Whatever you do to the least of these, you do to me,” Bishop Rinehart added. “Jesus make the despised Samaritan a hero because he cares for someone who’s in a rough spot — the neighbor who practices hospitality regardless of ethnic or religious background.”

“At a time when the world has more than 68 million refugees who are searching for peace and security,” said a statement from Jesuit Refugee Services USA, “lowering the level of admissions to the U.S. will not only have a detrimental effect on thousands of individuals and families, but will also continue to weaken the leadership role that the U.S. has maintained in meeting the needs of suffering people around the world.”

“As a nation of immigrants, we must open our doors to refugees who are escaping war and persecution,” said a statement by Patrick Carolan, executive director of the Franciscan Action Network. “Thirty thousand refugees is too low a number when we are facing this historic crisis. It is imperative that we translate these words into action on behalf of refugees and ask for 75,000 people resettled at minimum.”

“The Trump administration’s continuing attempts to dismantle the U.S. refugee resettlement program in the face of an unprecedented global refugee crisis is unconscionable,” said a statement from Sister Carol Zinn, a Sister of St. Joseph, who is executive director of the Leadership Conference of Women Religious. “We strongly object to President Trump’s attempts to limit our ability to heed the scriptural command to welcome the stranger and care for the foreigner.”

“The Trump administration’s latest attack on the refugee resettlement program is so shameful. Refugees are fleeing violence and persecution. We must act with love and compassion,” said a statement by Sister Simone Campbell, a Sister of Social Service who is executive director of the Network Catholic social justice lobby. “The Trump administration acts with callous disregard for vulnerable people. The faith community knows we are better than this and is ready and eager to welcome many more refugees.”

“By further slashing our refugee quota and shutting our doors to the most vulnerable, the Trump administration is abandoning the United States’ historic moral vision as a beacon of freedom and hope for narrow-minded xenophobia and fear. Americans can do better,” said a statement by Gerry G. Lee, executive director of the Maryknoll Office for Global Concerns.

“We stand with all people of faith who welcome these families fleeing unbearable violence and death with compassion and open arms,” Lee added.