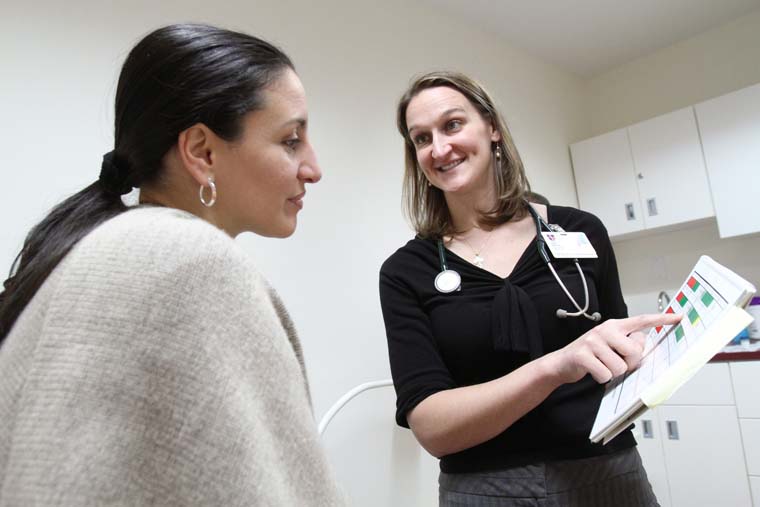 WASHINGTON (CNS) — There are plenty of myths that surround natural family planning, but advocates say the Catholic Church can help dispel those myths and raise an awareness of which fertility-awareness options exist for married couples that embrace church teaching.

“It amazes me how many people are not aware of the multitude of fertility awareness-based methods out there,” said Dr. Marguerite Duane, adjunct professor at Georgetown University and executive director of Fertility Appreciation Collaborative to Teach the Science.

Despite the variety of natural family planning methods — the Billings Ovulation Method, Creighton Model, Two Day Method, Marquette Model, Sympto-Thermal, Standard Days Method, among others — and the science involved in their medical application, certain myths continue to circulate regarding the effectiveness and benefits of natural family planning.

The “rhythm method,” popularized in Dr. Leo J. Latz’s 1932 book “The Rhythm of Sterility and Fertility in Women,” uses none of the biological indicators and symptoms, such as cervical mucus observations and basal body temperature, that modern natural family planning methods — also called fertility awareness-based methods — use today.

“Today, we’ve got the ability to monitor hormone metabolites in urine at-home test strips,” said Mike Manhart, former executive director of the Couple to Couple League. These test strips detect the release of the luteinizing hormone, which is released prior to ovulation.

Manhart, who has taught natural family planning alongside his wife for 32 years, said the development of tools like these in the past 20 years especially helps couples with atypical situations.

Even the Centers for Disease Control and Prevention has it wrong, noted Duane. Its website reports a 24 percent “failure rate” for all “natural methods.”

Fertility Appreciation Collaborative to Teach the Science, teamed with Natural Womanhood, a woman’s health literacy program, to organize a petition requesting that the CDC update its website with current, more accurate data and cite the effectiveness rate of each fertility awareness based method individually.

This failure rate comes from “retrospective surveys based on patient recall, a flawed methodology,” reads the petition. Additionally, “86 percent of the respondents reported using variations of the calendar rhythm method — an outdated and less effective” method, it continues.

Yet, the petition states that when looked at individually, the effectiveness rates of natural family planning methods are between 95.2 and 99.6 percent with correct use. With typical use, the rate of unintended pregnancy ranges from 2 percent to 14 percent.

Along with the ineffective myth, another common misconception of natural family planning is that it is too difficult or time-consuming.

“There is some legwork in the beginning,” said Lucynda Choi, but “like anything, you start a new job and you’ve got a lot to learn, but once you’re in it, you’re in it. You know how to do it and it’s second nature.”

“You’re just making an observation,” she said, “30 seconds of mental work a few times a day.”

Lucynda and Michael Choi are firm advocates of natural family planning. When doctors in Portland, Oregon, were unable to help the couple conceive, they found the Pope Paul VI Institute in Omaha, Nebraska, and began charting Lucynda’s cycle with the Creighton Model. After a few surgeries in 2007, the couple conceived in 2008 and now have three children.

At the same time, warns Duane, it’s important not to oversell natural family planning as too easy. “The reality is these methods can be hard. Most of them call for couples abstaining and that’s really hard for a lot of couples.” And if women have irregular signs or symptoms, they can become frustrated, said Duane.

While certain myths continue to linger, advocates of natural family planning say there is plenty that the Catholic Church can do to inform and support those who wish to learn.

For starters, teaching fertility education earlier and not just to engaged or married couples.

“We should be teaching fertility education during confirmation prep,” said Duane. “Begin offering education about fertility appreciation — not just awareness but really understanding and appreciating and respecting your body — throughout every diocese in the U.S.”

Dr. Hanna Klaus, founder of TeenStar, a sex-ed curriculum for grade school to college-age youth, recommends “the long range approach of teaching fertility literacy when the body begins to have hormonal changes,” i.e., puberty. The church should embrace experiential learning — meaning allowing young women to learn and chart their own cycles, she said.

Once “they own their fertility,” added Klaus, “they begin to move away from peer pressure and begin to make their own decisions.”

Then “obviously it’s going to come that the full use of the sexual faculty can only be realized in a permanent, committed relationship called marriage and one that is open to life,” she added.

In the apostolic exhortation “Amoris Laetitia,” (“The Joy of Love”) Pope Francis speaks to the “need for sex education.”

“Who speaks of these things today? Who is capable of taking young people seriously? Who helps them to prepare seriously for a great and generous love? Where sex education is concerned, much is at stake,” writes the pope. TeenSTAR is trying to respond, said Klaus.

Along with educating youth, the entire parish needs to be more informed on natural family planning.

For Michael Choi, creating more consistency with education and resources from parish to parish is one way the church can help to provide accurate information.

“People are super resistant to doing anything that isn’t easy. Making it as accessible and as easy as possible with resources is going to be a big component.”

In the Archdiocese of Portland, Oregon, the Marriage and Family Life Office is focused on creating resources for the parish. “They’re trying to help the parishes become more helpful,” said Michael Choi, whether it’s through websites, videos or access to instructors.

The Chois also suggest that the church emphasize natural family planning as a holistic, natural approach to women’s health.

“In an age where people are glomming onto what’s natural, not invasive, not using chemical, there’s a real play there that NFP can have in terms of being a very natural solution,” said Michael Choi. “It becomes a marker of health. It can be predictive of certain health issues.”

“I still chart to this day, even though I’m starting these premenopausal symptoms. I still chart because the doctor can diagnosis from it and watch my health,” said Lucynda Choi.

“There’s a priest who probably weaves an NPF anecdote into his homily at least once a month,” said Manhart.  Acknowledging it from the pulpit recognizes “that it’s a normative and appropriate way to live the vocation to marriage.”

“Seminarians and priests also need to be taught about fertility awareness-based methods,” said Duane. Otherwise, “how can they preach about it? They’re not going to feel comfortable. What if someone asks them a question about it?”

The church should not be afraid to proclaim this gift we have, said Manhart. “It’s a highly kept secret that doesn’t need to be secret.”