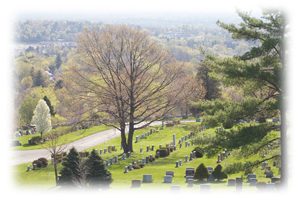 Catholic cemeteries focus on rebirth as they prepare for spring

There are Cornelian cherry trees with bright red berries and Bradford pear trees covered in white flowers. There are long rows of shocking red Burning Bush shrubs and lilacs heavy with perfume. There are lacey pink spirea, towering maple trees and thousands and thousands of flowers.

All this life to be found among the gravestones and mausoleums of the Syracuse Diocese’s 13 cemeteries.

“The landscape is on a cycle just like people are,” said Ralph D’Agostino, superintendent of St. Mary’s Cemetery in DeWitt. “It’s going through changes all the time, too.”

With the return of spring, maintenance crews are working steadily to bring life back to areas that many associate only with death.

Matt Kompf has worked on the maintenance crew of St. Mary’s Cemetery for 25 years. He said that for him, it’s just like any other landscaping job. On a sunny spring afternoon, he was swooping around the gravestones to mow the grass.

Kompf said now the push is on to prepare for Memorial Day. “That’s kind of like our Super Bowl,” he said.

St. Mary’s Cemetery is one of the oldest in the city. It stretches over hundreds of acres with sloping hills, trees and a stream. All of this needs regular, seasonal upkeep. “People just don’t understand the intensity of it,” D’Agostino said.

Flowers for the Catholic cemeteries alone take up an entire greenhouse at Zerrillo’s Greenhouse in East Syracuse. “I’d say they probably use between 18- and 20,000 individual plants,” said George Zerrillo, owner of the greenhouse.

Zerrillo has been preparing flowers for the cemeteries for about 30 years, and he said the process begins in January and continues up until just before Memorial Day.

“One of their problems is that they don’t want to put the flowers in until before Memorial Day because of the chance of frost,” Zerillo said. So with all of the other maintenance duties like mowing, reseeding and fixing damage from snow plows, thousands of flowers need to be planted in a short period of time. “That puts a real push on them,” Zerrillo said.

Ironically, there is a rush to put so many flowers in because of their calming effect.

“There are very extensive flowers planted because I believe that flowers offer tranquility,” said Mark Lazaroski, director of Catholic Cemeteries for the Syracuse Diocese. The flowers aren’t planted in individual lots, but are instead put in communal spaces. “They’re planted as a group remembrance,” he said.

Lazaroski has a background in landscape architecture, and he gets very excited about the way in which flowers, grass and trees can change a landscape. He said special attention is paid to the color schemes of flowers and the placement of shrubs as borders.

Flowering trees of different colors are placed around the cemeteries so that, for instance, a mother who loved pink can be buried by a tree with pink flowers.

“You leave with Dad and you say, ‘Mom’s going to be happy, she’s got her pink crab apple tree,’” Lazaroski said.

But sometimes this same desire to surround a loved one’s grave with meaningful plants or tokens can become problematic for the maintenance crews.

But during the growing — and particularly the mowing — season, the wires in artificial flowers can become dangerous because they can be pulled through the blades of a mower and whipped out to harm anyone nearby.

Lazaroski said another problem can be plants that are put in and then neglected.

“If you want to plant something, call the superintendent’s office first because people’s intentions are great, but, you know, tiny trees grow,” he said. “Somebody may live in Florida and come up once a year, but they’ve got a tree there, and who’s taking care of that?”

Because the staff at the Catholic cemeteries work so hard to maintain the grounds, they have to impose some guidelines to be sure that the overall appearance of the area is maintained.

For Christopher Nacey, superintendent of Our Lady of Peace Cemetery in Baldwinsville, artificial flowers out of season and other mementoes left at graves like baseballs, garden gnomes and glass candle holders can sometimes take part in a never-ending cycle of their own. Every week, these items are removed from gravesites by the maintenance crews and placed out by the maintenance barn for families to collect. Sometimes, those same items find their way back, only to be removed again.

“I guess people like to keep giving,” he said with a shrug.
Our Lady of Peace Cemetery is the newest cemetery in the diocese. Opened in 1998, it has 107 acres, most of which are still open, grassy fields.

“I was here for day one,” Nacey said. And he can even remember the first burial at the cemetery, “Mr. Unangst,” he said, “on June 15.”

He said Mrs. Unangst came to the cemetery with a chair and spent time sitting in different sections. When she found a spot she liked — overlooking the lake and by some trees — she settled on that spot. And after her husband was buried she visited nearly every day, Nacey said.

Over the summer a new burial section will be constructed around the man-made lake that now sits in the middle of a field. A walking path with trees and flowers will circle the lake, with several spots to sit and look at the water. The lake is filled with grass-eating carp who don’t breed but keep the weeds from overtaking the lake.

Lazaroski has designed Our Lady of Peace Cemetery along with some help from a professional cemetery planning and architecture company.

“It’s like the best thing in my life is to have a cemetery that I can work with from day one,” Lazaroski said. “This was the high-point of my career, because it was an opportunity to start from the ground up and make it into a modern, functioning Catholic cemetery.”

Dominating the lake area will be a structure called a columbarium, which will be put in place sometime in the fall. The columbarium is a smooth-sided rectangular vault about eight feet tall with niches where urns with cremated remains can be placed. This columbarium will have a tall bronze statue of Mary on top of it.

Another, less noticeable but very important feature of the new burial area will be a good drainage system to deal with soil which can quickly become saturated with rain. As Nacey pointed out, the town isn’t called Clay for nothing.

Maintaining dry ground is an ongoing effort in all of the Catholic cemeteries, including St. Mary’s with its many hills. “A dry cemetery is a luxury because when they put cemeteries in, they put them in places that were undesirable for agriculture,” D’Agostino said.

Above and beyond the landscaping and maintenance concerns of the cemeteries, supervisors also deal with the people who are coming to them, often at very difficult times in their life. All of the Catholic cemeteries sell gravestones now, so along with coordinating the temporary concerns like mowing grass and planting flowers, supervisors help people make very permanent decisions to mark a life.

Daniel Moorhead, assistant superintendent of St. Mary’s Cemetery, said he was surprised at first at how much his work had to do with people as much as landscape. “There’s a lot of dealing with people and people telling you their problems,” Moorhead said. “You learn it, you adjust to it.”

For D’Agostino and Nac
ey, this has become one of the parts of the job they like best.

“I think the biggest thing that motivates me is that I like working for the church,” D’Agostino said. “I like helping people to the best of my ability when they’re in their toughest moments.”

Nacey told stories about bereaved people who would visit graves daily, sometimes parking along the side of the road by a grave to have lunch and read the paper. Much of his job involves seeing how people deal with the death of loved ones. “I meet them at their worst times and I meet them at some of their best times,” he said.

Dealing with many different stages in the life cycle is all part of the job for the people who work at the Catholic cemeteries.

“After all,” Lazaroski said, “cemeteries are for the living.”