After decades at Trinity, Principal Sugar’s retirement is bittersweet 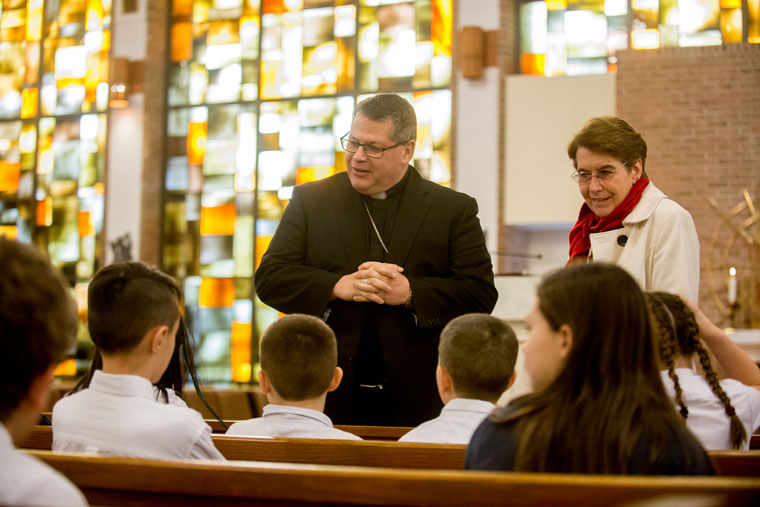 More than 60 years after first walking into the school as a kindergartener, Barbara Sugar will retire as principal of Oswego’s Trinity Catholic at the end of this month. Reflecting on some six decades connected to the school as a student, alumna, teacher, parent, and administrator, Sugar says, “I honestly feel that Trinity is like a family.”

A native of Oswego, Sugar became a part of that family on her first day of kindergarten at what was then St. Paul’s Academy. (The school became Trinity in 1999, after the merger of St. Paul, St. Mary, and Holy Family schools). Sugar attended through eighth grade, going on to high school and then SUNY Oswego. She returned to the school after her sophomore year to volunteer with her third-grade teacher and continued volunteering throughout college.

After graduating with a degree in elementary education, Sugar was hired as a fifth-grade teacher at St. Paul’s. Looking to the future, “I just knew that this is where my kids were going to go,” she recalled.

Sugar taught for two years before welcoming her first child. She spent several years as a full-time parent, welcoming two more children, and continued to serve the school as a member of the school board. As her children became students at St. Paul’s, Sugar returned as well, as a volunteer and substitute teacher.

Sugar returned to the classroom full time as Trinity’s art teacher, a position she held for 21 years. She became principal in 2012.

Over the years, Sugar has come to know Trinity as a place where “we really do watch out for each other” and teachers and parents are committed to children’s success. “This year really proved it,” she said.

“We recognize those truly unique individuals who have literally devoted their adult and professional lives to this mission of service, this vocation as a Catholic school educator. Barbara Sugar is such an individual. This type of servant leadership — one who wants to serve, rather than gain power, influence, or fame — is to be honored and celebrated. Thank you from the diocese and the Oswego community for this example and commitment to our faith as an educator and leader.” — Superintendent William Crist

Masking, social distancing, and cleaning protocols were written and additional staff was hired. Hand hygiene was a concern, however, since the school’s bathrooms have one sink each, Sugar explained. She found portable, foot-pump camping sinks online for about $150 each, and Trinity community members immediately stepped in with donations to purchase 10 sinks.

Over the course of the school year, there was no spread of the virus in the school, Sugar said, and nearly all of Trinity’s 153 pre-K to sixth-grade students have returned to in-person instruction. Sugar credits the staff and the school’s families for the successful year. “I think the parents believed that we were doing everything in our power to keep the kids safe,” Sugar said. “And that’s what you need — you need to have their trust.”

Having successfully led Trinity through the worst of the coronavirus crisis, Sugar now feels ready to retire — but it’s unlikely she’ll be a stranger at the school. Four of her grandchildren are Trinity students (two will graduate this month) and she’s ready to lend a hand at the school’s fundraisers if needed.

And while she’s looking forward to having more time to spend with her family, travel with her husband, and reinvigorate her daily walking routine, Sugar is also looking back on her decades at Trinity with love.

Among her fondest memories are “the friendships I’ve formed with parents,” she said. “I’m still really close with people who. … were actively involved when their kids were here and they stayed involved” long after those kids graduated.

Also special are her memories of the students. “Everyone tells the teacher that they should write down some of the things that happen, and over the course of my years I wish I had done that,” Sugar laughed. “Kids say the darndest things.”