Carmelite Sisters of the Aged and Infirm have a unique charism

UTICA — Some religious sisters were taught and inspired by nuns, 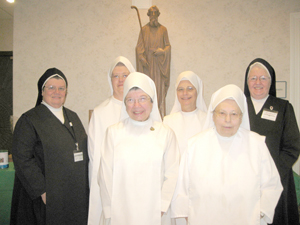 and others seek a particular vocation within their vocation like nursing, teaching, working with the poor, or working with children. The Carmelite Sisters of the Aged and Infirm spend their days serving the elderly. They operate 19 facilities across the U.S. and one in Ireland. St. Joseph’s Nursing Home in Utica is one of their homes for the aged. The order offers a unique ministry which means meeting the residents’ needs — physical, emotional and spiritual.

The Carmelite Sisters of the Aged and Infirm are celebrating the 80th anniversary of the founding of their order this year. St. Joseph’s Nursing Home will celebrate its 40th year in 2011.

One hundred and twenty residents live at St. Joseph’s Nursing Home. The facility is nicely appointed with family-style dining facilities and a cafe, a lounge on each floor where the residents can watch television or catch up with their families. All dietary special needs are met and there is 24-hour nursing care with a physician on call at all times.

The sisters know that making the decision to place a loved one in a nursing home can be very emotional. They realize new residents have likely just lost a spouse or are leaving a home where years of memories have accumulated. Like the founder of their order, Mother M. Angeline Teresa McCrory, O Carm., they feel a deep commitment to the compassionate care of the elderly.

Mother Angeline was born on Jan. 21, 1893 in County Tyrone, Ireland, but moved to Scotland with her family when she was still a child. She left home to join the Little Sisters of the Poor eventually coming to the U.S., to the Bronx. It was the mid-1920s and she was named the superior of one of the order’s homes there. The congregation focused on the care of the destitute aged but Mother Angeline wanted to do more. She realized that the European methods of dealing with the elderly did not suit the needs of the residents in the U.S. She found a friend in Cardinal Patrick Hayes of New York who encouraged her to reach out even more.

Mother Angeline died in 1984 after watching her order grow beyond her expectations. She is buried at St. Teresa’s Motherhouse  in Germantown, N.Y., and her cause for beatification and canonization is being investigated in Rome. The Diocese of Metuchen, N.J. finished its review of a possible miracle and the information was sent to the Holy See approximately a month ago.

The Carmelite Sisters of the Aged and Infirm number nearly 200 now, with three women in early formation. Descriptions of Mother Angeline say she had the rare gift of treating all people as if they were the most special persons in the world. There are still sisters around today who knew or worked with Mother Angeline.

Together the sisters serving at St. Joseph’s Nursing Home have a total of more than 350 years of service among them. Sister M. Rose Spencer has been a Carmelite Sister of the Aged and Infirm for 65 years and is quick to say that she was not interested in joining an order of school teachers.

“I don’t have the patience,” she said. “What happens here is teaching in ways no one thinks of.”

Sister M. Eileen Rosinski did want to be a teacher, but her volunteer experience at a nursing home became more and more important to her until she realized that it was what made her most happy. “Why would I want to spend all my time in a classroom when I really wanted to be at the nursing home,” Sister Eileen said.

Sister Eileen said their goal is to make St. Joseph’s as home-like as possible. “We want the atmosphere to be warm and friendly and we want to be available for them,” Sister Eileen said. “We have Mass every day here and the residents also go out sometimes. They really relate with each other.”

There is a reverence at St. Joseph’s for those who have lived a long life. The sisters respect the knowledge and the experiences the residents bring. The sisters realize they are often present at a most important time, the end of person’s life.

“There are many graces and blessings,” said Sister M. Xavier Francis Russo. “It is a privilege to be with the dying and we are right there with them saying prayers when they leave this world.”

Sister Xavier worked with the sisters in New York City when they used to go in groups of two or three walking along the piers collecting money for their work with the aged poor. Her accent reveals her Hoboken, N.J. childhood. Sister Xavier’s siblings had a fairly famous babysitter, Dolly Sinatra, the singer Frank Sinatra’s mother.

Sister Sean Damian Flynn loves working with the elderly at St. Joseph’s and said that it is like having “dozens of grandmothers.”

The charism of the order has inspired a parish ministry just getting off the ground in Rochester, N.H.

Mother Angeline Ministries of Care will offer parish volunteers the training they need to serve the elderly who are homebound or dying. The sisters have a training center, the Avila Institute of Gerontology, which offers educational opportunities related to the care of the elderly. The sisters are available to train people to practice this ministry.

Many of the sisters became familiar with the order through a volunteer experience or through a relative that was in one of the nursing homes run by the sisters.

Sister Patricia Markey was an only child and her mother was not thrilled with the idea of her vocation. It all began for Sister Patricia when a school friend convinced her to volunteer at a nursing home.

“I thought that since I had signed up I was obligated to go and I ended up falling in love with the residents,” she said. “My mother was opposed to my vocation at first, but then a cousin had a little boy and he entered her life and she saw that I was happy, and she met the sisters and she was okay with everything.”

Sister Robert Anthony Didas is the prioress of the group of sisters living in Utica. She wanted to be a cloistered nun but said about religious life, “You don’t pick it. It picks you.” She had a love of the elderly and the active/contemplative nature of the Carmelite Sisters of the Aged and Infirm appealed to her.

The order follows the Rule of St. Albert, one of the briefest rules of religious life. It is St. Albert’s instruction that outlines the way the sisters live. Including, for instance, Chapter 9 which states that the prioress or prior’s cell or room should be close to the entrance of the property so that he or she may be the first to greet anyone who may approach.

The foundation of their spirituality is in St. Elias. Mount Carmel is the birthplace of Carmelite spirituality and the home of Elias, a prophet of the Old Testament, and it was the home of the early hermits who followed him.

The Carmelites have a special relationship with the Blessed Mother convinced that her life followed the Rule of St. Albert. Mary’s example of perfect discipleship is one the order works to emulate. This lived-out active contemplation begins every morning for the sisters with praying the office and the rosary. There is time for private prayer before they begin each day at the nursing home with prayer in t
he chapel. Mass is celebrated each day at 4:30 p.m. with the residents. The sisters have supper together, preferring to eat with the residents, and then evening prayer.

“Oh no, we don’t cook,” the sisters said in unison.

Living in community has its highs and lows. The sisters laugh together and they cry together.

“Our community is like a family,” Sister Patricia said. “We have our little ups and downs but we have a lot of good times.”

The sisters wear a habit — white for work and brown when they’re not working or if they work in an administrative capacity — and they said the nursing home residents like the fact that they wear them. Undoubtedly the generation of residents remembers when sisters always wore habits.

Despite the age of the residents, St. Joseph’s Nursing Home is a pretty active place. There are 12 elderly couples living among the residents and there are planned outings to the nearby casino, fabric stores, fishing expeditions and visits to department stores. The sisters look at the nursing home not as an ending for the residents, but as the beginning of a new phase of their lives.

“They support each other,” Sister Sean said. “Many times they say they never expected to come here and make new friends at this stage in their lives, but they do.”