Ahead of papal visit, U.S. Catholics’ attitudes sliced and diced in polls 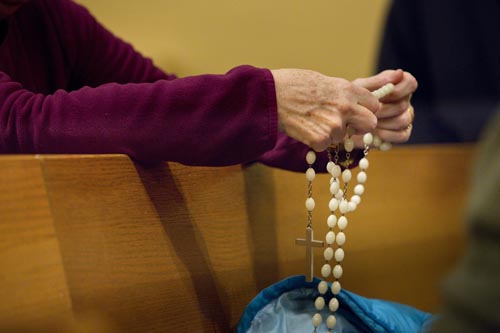 WASHINGTON (CNS) — If Pope Francis weren’t headed to the United States in a matter of days, American Catholics would never have known how much others value their opinions.

While Catholics are preparing for the upcoming papal trip, polling organizations were preparing in the way they knew best, by coming up with questions to ask them.

A Quinnipiac University poll conducted in August mirrors the PRRI favorability numbers: 69 percent of women, 63 percent of men, 61 percent of Protestants, 87 percent of Catholics and 63 percent with no religion have a “very favorable” or “favorable” opinion of Pope Francis.

The church is moving in the right direction, according to the Quinnipiac poll, by bold margins: among Catholics, 70 percent to 16 percent held that view; among all Americans, 43 percent to 21 percent said so; among Protestants, 36 percent to 24 percent agreed; and among those with no religious, 44 percent to 22 percent saw it that way.

“Pope Francis is sparking a resurgent confidence in the Catholic Church,” said a Sept. 3 statement from Tim Malloy, assistant director of the Quinnipiac poll.

The Catholic League for Religious and Civil Rights commissioned its own poll of 1,000 Catholics in August. Among the results, 95 percent say their faith is important to their everyday life, 83 percent approve of Pope Francis’ job as pontiff, 79 percent say he has changed things for the better, and 68 percent say their commitment toward their church hasn’t been altered “in any significant way” in “the recent past,” perhaps an allusion to the clerical sexual abuse scandal that rocked the U.S. church more than a dozen years ago but whose aftershocks are growing more faint.

Asked if the church should stick to its founding principles and beliefs, 52 percent said yes, but 38 percent said it should change. “In other words, some are conflicted,” said an article in the September issue of Catalyst, the Catholic League’s monthly newsletter.

On the subject of former Catholics, PRRI found nearly half of them — 49 percent, to be exact — no longer practice any religion. Of those who are now members of another faith, 16 percent said they are members of a “minority” Protestant religion, 14 percent are white evangelical Protestants, and 9 percent each are in white mainline Protestant denominations or non-Christian churches.

Twenty percent of the U.S. population identify themselves as Catholics, according to the Pew study. Nine percent are described by Pew as “cultural Catholics” — not Catholic by religion, but identifying as Catholic aside from religion. They see belief in the Resurrection, a personal relationship with Jesus and outreach to the poor as essential to Catholic identity.

Another 9 percent are ex-Catholics, raised Catholic but no longer identifying as such. Eight percent connect to Catholicism in other ways, such as through a parent or spouse. Every generational cohort, from millennials to those born in the pre-baby boom era, has a Catholic connection with at least 40 percent of its members.

Jessica Martinez, a Pew senior researcher, told Catholic News Service, that the questions on Catholic identity are new to the Pew study. She said Catholic identity, especially for those who don’t call themselves Catholics, was a more matter of self-identification, in which respondents suggested what ties they had to Catholicism.

“There’s certainly multiple ways that you could define ‘cultural Catholic,'” Martinez said. “We acknowledge that in this report this is just one way to do it. It’s used in a lot of different ways and different contexts.”

The Pew study said 39 percent of Catholics attend Mass regularly, and 47 percent of cultural Catholics go to Mass at least occasionally. Attendance rates are higher for women, senior citizens, college graduates, whites and married Catholics, though in no category did any group reach the 50 percent mark for weekly attendance.

Pew found that 34 percent of Catholics who have ever been married have gone through a divorce, a lower percentage than adults of other faiths. Of those who have divorced, about one-fourth have sought an annulment. (After the study was released, Pope Francis approved a streamlining of the annulment process intended to provide a pastoral solution for those seeking annulments.)

About 15 percent of all Catholics are either cohabitating or have remarried without an annulment. The numbers are nearly twice as high for Hispanic Catholics as they are for whites.

A majority of Catholics gave their OK to cohabitation and to a married couple deciding not to have children, and a strong plurality — 46 percent — said a same-sex relationship where the partners are living together is “as good as any other way of life.” Only 25 percent called it “not an acceptable way of life.” And while there is more reticence about same-sex couples raising children, the opinions of practicing Catholics are not appreciably different from the rest of the population, and cultural Catholics and ex-Catholics view these situations more favorably.

Pew’s Martinez said questions about family life and child raising are also new to the study, and were asked in the context of the upcoming World Meeting of Families in Philadelphia.

In case you’re wondering, Catholics still believe in sin. With the exception of Catholics who say they seldom or never attend Mass (79 percent), more than 80 percent of every other Catholic subgroup Pew sliced and diced believe in sin.

Just what constitutes sin, though, is a matter of disagreement. The only action a majority said was sinful was having an abortion, and a plurality said engaging in homosexual behavior was a sin. More Catholics told Pew it was not sinful to buy luxuries without giving to the poor, remarry without an annulment, cohabitate, divorce, use contraception, drink alcohol, live in a house larger than needed and use energy without considering the environment.