All are welcome in this place 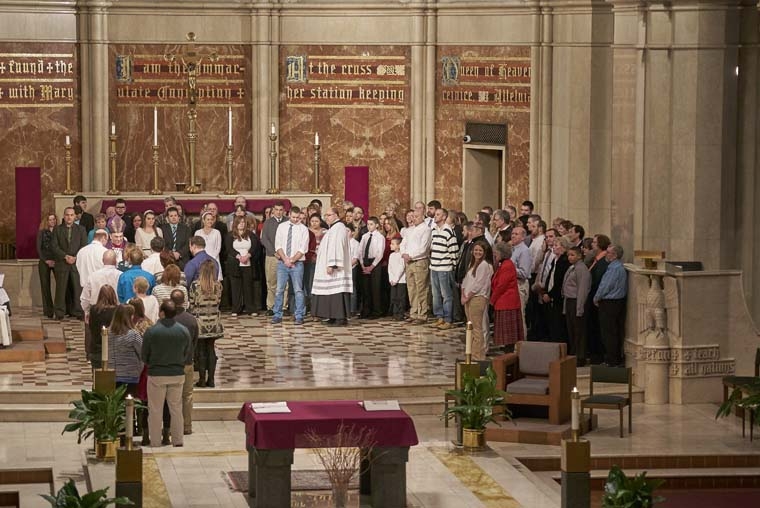 Catechumens celebrated at the Rite of Election

The Rite of Election was celebrated at the Cathedral of the Immaculate Conception Feb. 22, with Bishop Robert J. Cunningham presiding over a ceremony that included 72 catechumens from more than 30 parishes in the diocese.

The Rite of Election is an important step in the Rite of Christian Initiation of Adults (RCIA) wherein individuals, called catechumens, publicly express their desire to be baptized in the Church.

Bishop Cunningham welcomed the catechumens warmly and during his homily commented on how each of them had worked hard over the past several months to grow closer to God.

“You will publicly express your desire for baptism and will be known from this point as the ‘elect,’” Bishop Cunningham stated. The word “election,” he explained, means “chosen” in Latin.

“Dear catechumens, God has chosen you…. Always hold onto the truth that you have a place in God’s heart and that he has called you by name,” he said.

During the ceremony, catechumen Shayna Borghdorf-Terpening, from St. Joseph’s Parish in Oswego, gave a moving reflection on her personal journey of faith following the loss of her infant son, Raymond, to a rare neurological disease in 2013.

Following Borghdorf-Terpening’s story, the catechumens were called by parish coordinators to stand and be recognized and then proceed to the altar to sign the Book of the Elect and be greeted by the bishop.

Catechumen Kelly Coughlin, from St. Daniel Parish in Syracuse, was feeling nervous at the start of the ceremony but excited to be a part of the day’s event. “I am so happy for Kelly,” stated Coughlin’s godparent and sponsor Christine Loman. “She has just been on fire to join the Catholic religion.”

Holly Starr, 25, a sociology student at Le Moyne College and a parishioner at Christ the King Church in Liverpool, has been working hard at RCIA since the summer of 2014. “I always thought I was Catholic until I asked my mother where I was baptized and found out that I never was. I’ve attended church since I was young so it was a bit of a surprise,” stated Starr, who stood alongside her godparent, Cindy Peters.

Richard Curran, 11, a sixth grade student at Roxboro Road Middle School and a parishioner at St. Rose of Lima Church in North Syracuse, was so filled with excitement at the prospect of the Rite of Election he could barely sit still. “I am really excited and happy and can’t wait to meet the bishop,” stated Curran.

His godparent Maria Poulsen stood nearby smiling. “He is a very special boy and I am very proud to be here,” stated Poulsen.

The next step for the catechumens will be a baptismal ceremony that will be performed at their home parishes prior to the Easter Vigil.

The Call to Continuing Conversion, wherein candidates baptized in other faiths express their desire to enter full communion with the Church, will be celebrated March 1 at the Cathedral of the Immaculate Conception.