American bishops respond to claims made in Archbishop Vigano’s letter 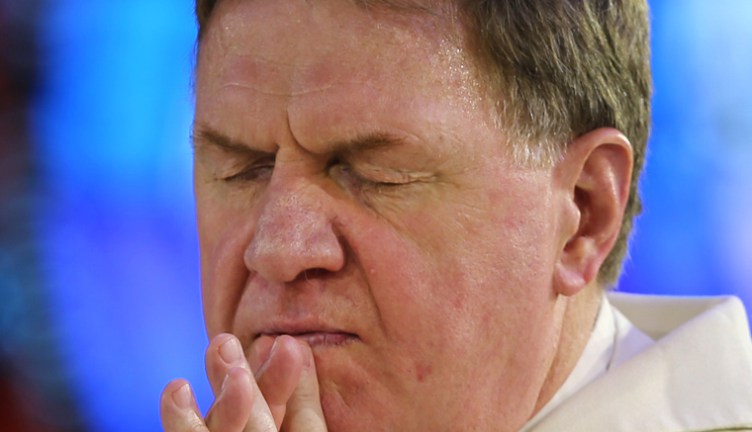 Cardinal Joseph W. Tobin of Newark, N.J., prays as he concelebrates Mass during the 2017 Convocation of Catholic Leaders in Orlando, Fla. In an Aug. 27 statement Cardinal Tobin and the Archdiocese of Newark expressed shock, sadness and consternation at the wide-ranging allegations published by Archbishop Carlo Maria Vigano, former apostolic nuncio to the United States. (CNS photo | Bob Roller)

WASHINGTON (CNS) — Several American bishops responded quickly upon hearing of the charges leveled by Archbishop Carlo Maria Vigano, the former Vatican ambassador to the United States, that church leaders — including Pope Francis — had been told years ago of the abuse allegations lodged against retired Archbishop Theodore E. McCarrick.

Among those who responded were prelates who were named by Archbishop Vigano in his letter, published Aug. 26.

Cardinal Blase N. Cupich of Chicago, said he considered “astonishing” one sentence in the archbishop’s 7,000-word document, which said: “The appointments of Blase Cupich to Chicago and (Cardinal) Joseph W. Tobin to Newark were orchestrated by McCarrick, (Cardinal Oscar Rodriguez) Maradiaga (of Tegucigalpa, Honduras) and (Cardinal Donald W.) Wuerl (of Washington), united by a wicked pact of abuses by the first, and at least of cover-up of abuses by the other two. Their names were not among those presented by the nunciature for Chicago and Newark.”

“The only substantial conversation I have ever had about my appointment to Chicago with the former nuncio was on Sept. 11, 2014, when he called to inform me of the appointment. The former nuncio started the conversation by saying: ‘I call with news of great joy. The Holy Father has appointed you the archbishop of Chicago.’ He then congratulated me upon hearing of my acceptance,” Cardinal Cupich said in an Aug. 26 statement.

“Moreover, the former nuncio personally participated in my installation ceremony in Chicago in November 2014 and personally presided at the imposition of the pallium the following summer, and on both occasions offered only supportive remarks and congratulations,” Cardinal Cupich said.

Cardinal Tobin, in a separate statement, said, “The factual errors, innuendo and fearful ideology of the ‘testimony’ serve to strengthen our conviction to move ahead resolutely in protecting the young and vulnerable from any sort of abuse, while guaranteeing a safe and respectful environment where all are welcome and breaking down the structures and cultures that enable abuse.”

He added, “Together with Pope Francis, we are confident that scrutiny of the claims of the former nuncio will help to establish the truth.”

“The recent letter of Archbishop Carlo Maria Vigano brings particular focus and urgency,” said an Aug. 27 statement by Cardinal Daniel N. DiNardo of Galveston-Houston, president of the U.S. Conference of Catholic Bishops. “The questions raised deserve answers that are conclusive and based on evidence. Without those answers, innocent men may be tainted by false accusation and the guilty may be left to repeat sins of the past.”

Cardinal DiNardo added, “I am eager for an audience with the Holy Father to earn his support for our plan of action. That plan includes more detailed proposals to: seek out these answers, make reporting of abuse and misconduct by bishops easier, and improve procedures for resolving complaints against bishops.”

A statement from the Archdiocese of Washington said Cardinal Wuerl — who himself is facing calls to resign over his actions as bishop of Pittsburgh, which was scrutinized in a Pennsylvania grand jury report covering 70 years of abuse in six dioceses in the state — “has indicated that during his entire tenure as Archbishop of Washington no one has come forward to say to him, ‘Cardinal McCarrick abused me’ or made any other like claim.

The Aug. 27 statement added, “The only ground for Cardinal Wuerl to challenge the ministry of Archbishop McCarrick would have been information from Archbishop Vigano or other communications from the Holy See. Such information was never provided.”

Archbishop Vigano also has had to respond to charges that he covered up an investigation of abuse claims against now-retired Archbishop John C. Nienstedt of St. Paul and Minneapolis, who was accused of abuse of seminarians and, according to one affidavit, that he had had an affair with a member of the Swiss Guard before becoming a bishop.

“Accusations alleging that I ordered the two auxiliary bishops of Minneapolis to close the investigation into the life of Archbishop John C. Nienstedt are false,” Archbishop Vigano said in a statement issued Aug. 26, a day after his original statement.

“I never told anyone that Greene Espel (a law firm conducting the investigation) should stop the inquiry, and I never ordered any document to be destroyed. Any statement to the contrary is false, he added.

“However, I did instruct one of the auxiliary bishops, Lee A. Piche, to remove from the computer and the archdiocesan archives the letter falsely asserting that I had suggested the investigation be halted. I insisted on this not only to protect my name, but also that of the nunciature and the Holy Father who would be unnecessarily harmed by having a false statement used against the church.”

The memo was written in July 2016 by Father Dan Griffith, then the archdiocese’s delegate for the protection of minors. “On Jan. 28, 2017,” Archbishop Vigano said, “I wrote to both Archbishop (Christophe) Pierre (his successor as nuncio) and Archbishop (Bernard C.) Hebda (who had succeeded Archbishop Nienstedt), asking them to publicly correct the Griffith memorandum. In spite of repeated emails and phone calls, I never heard back from them.”

Archbishop Vigano’s original letter “is another daunting challenge to our confidence in the reliability of the church’s leadership, during a summer of devastating news regarding clergy sexual abuse and infidelity,” said an Aug. 27 statement from Archbishop Allen H. Vigneron of Detroit, who was ordained an auxiliary bishop of Detroit jointly with Archbishop Nienstedt in 1996.

“We have nothing to fear in facing squarely the allegations made by Archbishop Vigano. I join with the priests and people of the Archdiocese of Detroit in praying for the triumph of truth and transparency — and praying that it comes quickly,” Archbishop Vigneron said. “Whether the archbishop’s claims are confirmed or proved to be unfounded, the truth which comes to light will show us the sure path to the purification and reform of the church.”

“Having renewed my expression of respect and filial affection for the Holy Father, I must add that during his tenure as our apostolic nuncio, I came to know Archbishop Vigano both professionally and personally, and I remain deeply convinced of his honesty, loyalty to and love for the church, and impeccable integrity,” said an Aug. 27 statement from Bishop Robert M. Morlino of Madison, Wisconsin.

“In fact, Archbishop Vigano has offered a number of concrete, real allegations in his recent document, giving names, dates, places, and the location of supporting documentation — either at the Secretariat of State or at the apostolic nunciature,” Bishop Morlino added. “Thus, the criteria for credible allegations are more than fulfilled, and an investigation, according to proper canonical procedures, is certainly in order.”

“Obviously this is a time of great crisis for our church, and we pray that it will be an occasion for complete repentance and purification,” said Bishop Larry Silva of Honolulu in an Aug. 27 statement.

“While this causes much anger and disillusionment to all of us, I ask you to be extremely careful not to allow Satan to achieve his desire of dividing and destroying the Catholic Church, which always remains the beloved bride of Christ,” Bishop Silva added. “Be strong in your faith, and share that faith in Jesus Christ with others, because he is the way, the truth, and the fife.”

Saying he has known Archbishop Vigano for 39 years, “I have always known and respected him as a man of truthfulness, faith and integrity,” said an Aug. 27 statement from Bishop Thomas J. Olmsted of Phoenix.

“For this reason, I ask that Archbishop Vigano’s testimony be taken seriously by all, and that every claim that he makes be investigated thoroughly. Many innocent people have been seriously harmed by clerics like Archbishop McCarrick; whoever has covered up these shameful acts must be brought to the light of day.”

“In recent weeks ideological warriors within the church on both sides of the spectrum have utilized the tragedy of victims of abuse to promote their goals. The dedication to comprehensive truth has been subordinated to selective targeting of enemies and tendentious distortions of the truth,” said a statement from Bishop Robert E. McElroy of San Diego.

“Archbishop Vigano’s statement constitutes just such a distortion. It is not an attempt to comprehensively convey the truth,” Bishop McElroy added. “In its ideologically driven selection of bishops who are attacked, in its clear efforts to settle old personal scores, in its omission of any reference to Archbishop Vigano’s own massive personal participation in the covering up of sexual abuse by bishops, and most profoundly in its hatred for Pope Francis and all that he has taught, Archbishop Vigano consistently subordinates the pursuit of comprehensive truth to partisanship, division and distortion.”

“Let us be clear that they are still allegations, but as your shepherd I find them to be credible,” said a statement by Bishop Joseph E. Strickland of Tyler, Texas. “Using this standard the response must be a thorough investigation, similar to those conducted any time allegations are deemed to be credible.

“I do not have the authority to launch such an investigation but I will lend my voice in whatever way necessary to call for this investigation and urge that its findings demand accountability of all found to be culpable even at the highest levels of the church,” Bishop Strickland added. He directed all priests in his diocese to include his notice in Aug. 26 Masses and to post it on their websites and other social media “immediately.”

Archbishop William E. Lori of Baltimore voiced his support for Cardinal DiNardo’s statement. “Pope Francis has demonstrated his leadership on the issue of abuse in the church by holding bishops accountable and by extending pastoral love and care for survivors of abuse,” he said.

“On behalf of the Archdiocese of Baltimore, I renew my prayerful solidarity with our Holy Father and rededicate my own episcopal ministry to advancing those efforts which seek to ensure ours is a safe and holy church of God.”

Bishop Thomas J. Paprocki of Springfield, Illinois, in a statement Aug. 28, took note of how Pope Francis responded to a reporter’s question on Archbishop Vigano’s letter during the flight back to Rome from the World Meeting of Families in Ireland: “Read the statement carefully and make your own judgment. I will not say a single word on this.”

“Frankly, but with all due respect, that response is not adequate,” Bishop Paprocki said. “Given the gravity of the content and implications of the former nuncio’s statement, it is important for all the facts of this situation to be fully reviewed, vetted and carefully considered. Toward that end, Pope Francis, Vatican officials and the current apostolic nuncio should make public the pertinent files indicating who knew what and when.”