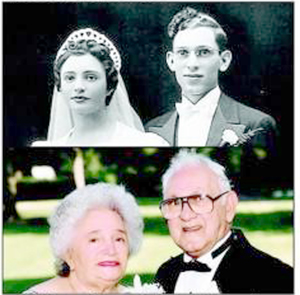 Angelo and Carmella Scarsi, lifelong natives of Syracuse’s north side, celebrated their 70th wedding anniversary on Sept. 23, 2009, with friends and family members of four generations. For Angelo and Carmella, the celebration signified a lifetime of happiness, joy, and celebration, surrounded by the family that they so deeply love.
Angelo was a printer by trade, first helping his father with his printing business and then spending many years at Onondaga Printing Co. and Kaufman DeDell, and retiring from Trident Printing Company. Angelo volunteered many years as a member of the Civil Defense and as an usher at Assumption Church, and founded the Golden Agers in Syracuse. While acquaintances know him as Angelo, his family and friends affectionately refer to him as “Papo.” Carmella was a stay-at-home mom and a homemaker.
Angelo and Carmella’s family includes their four children and their spouses, John and Patricia Scarsi, Patricia and William Halpin, Carleen and Paul Smith, and Angela and Tom Bersani. Grandchildren include John and Lisa Scarsi; Michael Scarsi; Mark and Laura Scarsi; Christopher and Amy Scarsi; William and Hollie Halpin; Shawn and Dana Halpin; Patrick and Pamela Halpin; Kathleen and James Harrington; Anthony and Nicole Smith; Jonathan Smith; Michelle and Bill Santiago; Courtney Smith; Tom and Ann Bersani; and Michael Bersani. Great-grandchildren include Angelo and Sophia Scarsi; Nicholas Scarsi; Mark, Matthew, Andrew and John Patrick Scarsi; Christopher, Tessa and Zachary Scarsi; Alexander and Amelia Halpin; Rachel and Brittany Halpin; Patrick, Megan, Joseph and Jenna Halpin; Kellie and Eric Harrington; Brandon McBride, and Anthony and Joseph Smith. To know our parents, grandparents, and greatgrandparents is to know love and kindness itself. “Happy 70th Anniversary, Mom and Dad! We Love You!”