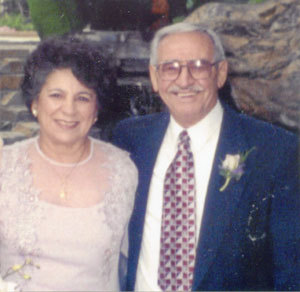 Anthony Sr. and Stephanie (Valentine) Rivizzigno of the Town of Salina will celebrate their 60th anniversary July 1, 2010. They were married on July 1,1950 at St. John the Baptist Church in Syracuse by Father Richard Culkin. Anthony and Stephanie had five children: son Anthony I and daughter-in-law Irene of Clay, and their son Anthony II; daughter Diane Morelli and son-in-law Peter Morelli of Endwell and their sons Peter of Boston and David of New York City; son David who passed away at age 21 of non-Hodgkins lymphoma; son Steven of Syracuse, and son Dennis and daughter-in-law Joan and their son Zachary of Palm Desert, Ca.
Anthony served in the US Army as Tech Sergeant at Schofield Barracks, Hi. He retired from General Electric 1989 after 43 years of service. Stephanie retired from Onbank after 15 years. She was an administrative assistant in the Investments and Funds Management Group. They are long-time parishoners of St. Daniel Church in Lyncourt. Stephanie served as Eucharistic Minister for many years and Anthony serves as an usher. Both Stephanie and Anthony have attended Bible Class for several years. The family is celebrating their anniversary at Steak & Sunday Restaurant in Syracuse.