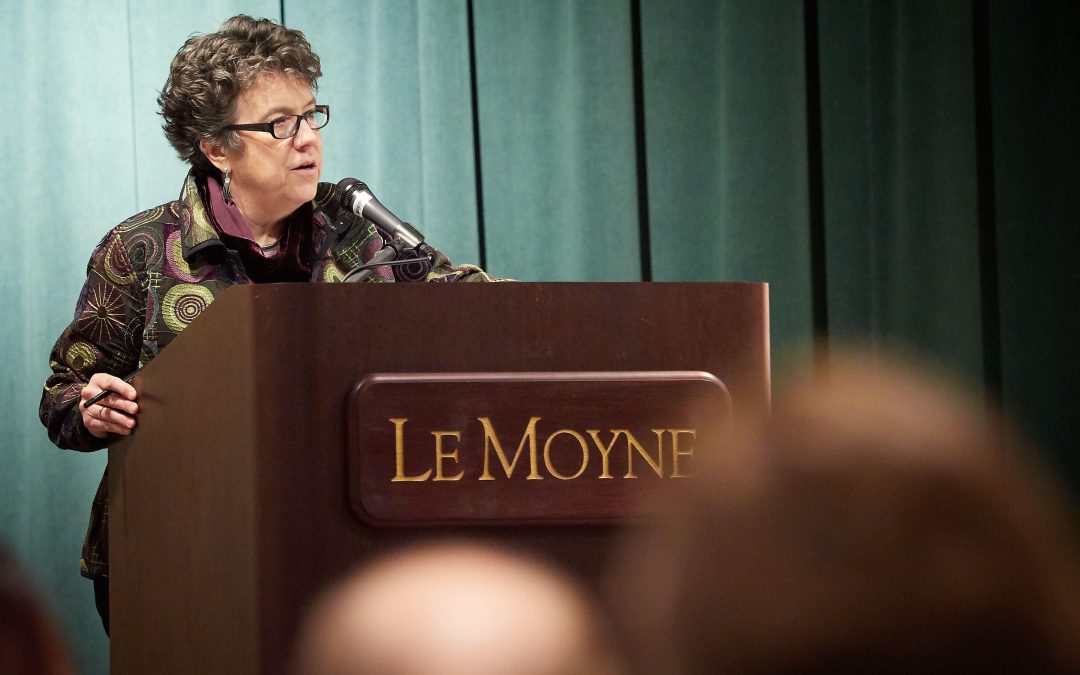 During an emotional speech about harsh prison sentences for minors, Elizabeth Calvin displayed a photo montage of teenagers. Some of the images looked like yearbook or prom photos; one showed a boy holding a basketball. In another, a boy sat in front of a computer. All the photos were taken within a year of when the boys were charged with crimes for which they were sentenced to life in prison without the opportunity for parole.

That “horrendous, horribly harsh” punishment, she said, “is wrong, especially for youth.”

Le Moyne created the annual lecture in 2000 to honor Father Berrigan’s legacy at the college, where he was a founder of a faith-based social justice organization, and his role as an influential Catholic activist. Berrigan, who died April 30, 2016, grew up in Syracuse and taught at Le Moyne from 1957 to 1963. He and his brothers — Philip, then a Josephite priest, and Jerry, a teacher in Syracuse — were known for their unrelenting anti-war activism.

Dan Berrigan inspired her, said Calvin, who is not Catholic. “His life stood for the principle that we each have a duty to make a difference and work for change,” she said.

Calvin is a lawyer with Human Rights Watch, an international organization that records human rights violations and advocates for policy changes. She focuses on the rights of children in California’s criminal justice system. She has advocated successfully for reform of the state’s policies on juveniles serving life without parole and works on a national campaign to end the use of extreme prison sentences for youth.

Half the youth sentenced to life without parole are first-time offenders, she said. “If you have a person who commits a terrible crime but has no history, you cannot conclude he is incorrigible,” she said. “They have an enduring ability to not be defined for the rest of their life by their worst act.”

The title of her lecture comes from comments a California legislator made during a hearing on reforming the state’s juvenile sentencing policies. “There’s a willingness to monsterize them,” Calvin said. That characterization, she said, ignores that people under 18 who commit horrific crimes are still children.

“Law and science recognize that young people are different from adults,” she said. The prefrontal cortex, which deals with planning, problem-solving, and risk assessment, is the last part of the brain to develop. “Young people are still developing the skills that prevent them from getting into trouble,” Calvin said.

She provided detailed descriptions of several young inmates sentenced to life without parole. Jason, for example, had a body that at 16 “was still in that gangly, not filled-out stage.” When he was 15 and homeless, he acted as a lookout for a robbery in which a man was killed. He was sentenced to life in prison, one of about 2,500 prisoners nationwide who are serving life-without-parole sentences for crimes they committed as juveniles.

“Sometimes he would slip into, ‘When I get out I’d like to …,’” Calvin said, her voice breaking, as she said Jason would leave prison only when he died. She wanted to comfort the boy, but “hugging is not allowed in maximum security prisons.”

Inmates sentenced to life without parole are overwhelmingly male, and 85 percent are people of color, she said. There is a “perception that the only way to deal with crime is incarceration,” she said. She also advocates that the criminal justice system consider the culpability of the juvenile, noting that 70 percent of those who get this sentence committed the crime under the influence of an adult.

In 2012, after several failed attempts, California Gov. Jerry Brown signed a law that allows people who were under 18 at the time of their crime to ask the sentencing court to review their case and consider a new sentence permitting parole after serving 25 years in prison. Calvin continues to advocate for reform, hoping to end life without parole for juveniles.

After Calvin’s talk, an audience member mentioned the January murder of Le Moyne sophomore Ismael Diaz-Marrero and his younger brother. The two were shot and killed; three people have been charged with murder and attempted robbery, police have said. The woman asked what would happen to the young perpetrators of that crime. Does prison offer them a chance for rehabilitation? Will they be able to get jobs when they get out of prison?

“People should have the opportunity to grow and mature,” Calvin said. They should “be punished, but our society should have mercy,” she said.

Renée K. Gadoua is a freelance writer and editor who lives in Manlius. She is a graduate of Le Moyne College, where she served as International House president her senior year. Follow her on Twitter
@ReneeKGadoua.