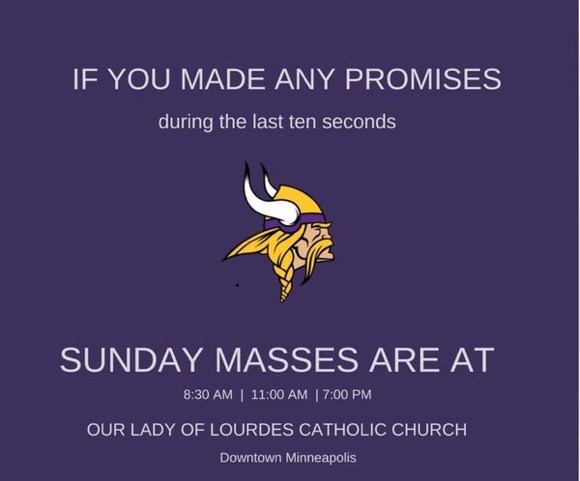 MINNEAPOLIS (CNS) — When Julie Craven witnessed what has been dubbed the Minnesota Vikings’ “Minneapolis Miracle,” the director of communications and strategic initiatives for Our Lady of Lourdes thought “there’s a Facebook post in there someplace.”

A Vikings season ticket holder, she was in U.S. Bank Stadium in Minneapolis on Jan. 14 when New Orleans kicked a field goal with 25 seconds left in the NFC playoff game, giving the Saints a 24-23 lead over the Vikings.

“People were devastated,” she said. “People literally had their hands folded in prayer. There were grown men around us crying, and then a lot of, ‘They (the Vikings) always choke. This is always what happens in the playoffs.’ Just dejected. And people started grabbing their coats.”

Then Case Keenum threw a 61-yard pass to Stefon Diggs, who caught it over two Saints’ defenders, stayed inbounds and ran untouched to the end zone just as the game clock ran out to give Minnesota a 29-24 victory. During the play, Craven said, “66,000 people went silent,” but when the referees threw their arms up to indicate a touchdown, the stadium erupted into pandemonium. Strangers grabbed each other with hugs, high-fives and “I love yous.”

“No one left the stadium for a half-hour after the game,” she said, noting that she attended the game with her husband, Doug, and two priest friends: Father Paul Treacy, pastor of Assumption Parish in St. Paul, and Father Dan Haugan, pastor of Holy Spirit Parish also in St. Paul. “You had to high-five every person leaving the stadium,” she said.

A former vice president and director of communications at Hormel, Craven drew on her marketing experience to capitalize on the game’s incredible final seconds. On a purple background with the Vikings’ logo, she typed: “If you made any promises during the last ten seconds, Sunday Masses are at 8:30 a.m., 11 a.m., 7 p.m., Our Lady of Lourdes, downtown Minneapolis.” She posted it to the parish’s Facebook, Instagram and Twitter accounts.

It quickly surpassed that aspiration. Within five days, it had 10,000 shares, 1,500 comments and a 1.3 million-person reach, just from Our Lady of Lourdes’ Facebook page. It has been featured by Sports Illustrated, ESPN and Reddit, and several other local and national media outlets. Noted Sports Illustrated in its online piece: “It seems fair to ask people who prayed for a divine intervention to decide the outcome of a football game to show up to service the next week. Especially considering the game-winning play was named ‘Seven Heaven.’”

Comments range from compliments on the clever idea (“well played”) and emojis indicating laughter to direct invitations to attend Mass. Commenter Eric Langness noted, “You might need to schedule more than 3 Masses this Sunday.”

Comments have been impressively positive, Craven said, noting that it’s easy on social media to attract people who express negativity when something is tied to the church. But not in this case.

“It was heartening that it was treated in a respectful tongue-in-cheek way,” she said.

An Our Lady of Lourdes parishioner since 2012, Craven still doesn’t know exactly what to make of the post going viral, but she thinks and hopes it could have an evangelistic impact. “There’s an intersection … between digital (media) and evangelization and humor, and it’s just a little bit more accessible,” she said. “People want reasons to bring faith into the conversation.”

Father Daniel Griffith, the parish’s pastor, called the post “divinely inspired,” Craven said, and she agrees. “I think there was an opportunity here that the Spirit jumped in and said, ‘I think I could have some fun with this one.’”

Wiering is editor of The Catholic Spirit, newspaper of the Archdiocese of St. Paul and Minneapolis.