Maryknoll sister circle the globe one step at a time

The Maryknoll Sisters will officially celebrate their centenary in 2012, but the order has taken the early lead. 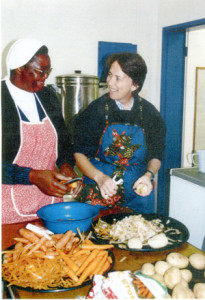 A “sneak preview” pre-centennial celebration took place at St. Joseph the Worker Church in Liverpool on Sunday, Nov. 15. The day included a Mass of Thanksgiving, a brief presentation on the Maryknoll order and a luncheon in the parish hall.

Sister Ellen McDonald, MM, said the celebration was held in Syracuse because of the connections the diocese has with the Maryknoll order. Sister Ellen herself is a native of Syracuse who graduated from St. John the Evangelist High School. Her work for the Maryknoll Sisters took her to Panama and Bolivia, and she currently works on a leadership team for the order.

Sister Anastasia Lott, MM, said the order has responded in many ways to the political, economic and environmental changes both in America and abroad. She has worked in Namibia and Kenya and was a lay missioner for Maryknoll in Venezuela. “I think that Maryknoll is born out of a maturing of the U.S. from a mission-receiving to a mission-sending nation,” she said.

These shifts have brought welcome changes to the order, said Sister Ellen. “We have a large number of intercultural women now and this never really happened in our early years,” she said. “What’s really exciting is that in our new moment of history we feel that we have been blessed with small numbers of women but they’re a different makeup of women.”

There are currently around 530 sisters in the Maryknoll order, working in 28 countries around the world, Sister Ellen said. “Certainly we are what we preach as far as what we are today — all ages, all cultures.” There are also priests and brothers that are a part of the Maryknoll mission as well.

The order has known sisters who were martyred in El Salvador, Korea and the Philippines, as well as countless others who disappeared without a trace. Yet the Maryknoll Sisters continue to respond to the challenges facing today’s world. Sisters are working to educate and provide support for young Masai women in Kenya before they are sold into marriage. They are working to educate people about the environmental impact of mining in the Philippines, they teach English in China, they are setting up clinics and helping community members learn to diagnose and treat common illnesses in Africa.

“You can’t do this without being called. It’s totally challenging and totally enriching,” Sister Anastasia said. “I think part of the challenge of a cross-cultural mission is that, at some level, you send yourself over the abyss to something you do not know. You have a new family, a new way of seeing things.”

She said she has a new family in Namibia now. “These people know a presence of God that I didn’t know, and I also have something that I can share,” Sister Anastasia said.

“It’s been a life I never expected of richness and fulfillment,” Sister Ellen said. Although she has dedicated her life to the Maryknoll Sisters and to mission work that has taken her around the world, Sister Ellen said she always looked to the next step rather than worrying about the whole journey. “You trust God and you just keep making the steps,” Sister Ellen said.

Sister Anastasia agreed that it was the same process for her life with the Maryknoll Sisters.
“You take one step and you don’t know where it’s going to lead you,” she said. “Then you’re there because of all the little steps.”