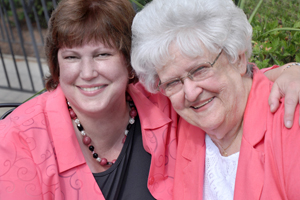 On May 6, Loretto and Benefit Specialists of New York, in recognition of Older Americans Month, presented “How to Have That Difficult Conversation with Your Loved One” at the Syracuse Chamber of Commerce.

At the beginning of the presentation, Haley Dubnoff, Loretto’s communications and public relations associate, said that for the last five years, Loretto has been embracing Older Americans Month as an opportunity to celebrate older Americans, their accomplishments and ongoing contributions. Loretto wants to reshape the image of older adults, increasing the visibility for a part of the population that is frequently ignored and forgotten.

People who are 85 years old and older are one of the fastest growing age groups in America. This age group grew over the past century from just over 100,000 in 1990 to 4.2 million in 2000. Americans are living longer and healthier.

Dubnoff said that American culture denies the realities of aging. “Older Americans aren’t as visible as their numbers would suggest, because we don’t allow it,” she said. “We continue to be a youth-oriented culture.

“Older Americans Month provides an opportunity at both an individual and community level to plan ahead for our futures as we age,” Dubnoff said. “We need to think about what our community needs to do to shape an environment that will meet the varied needs of older adults. Older Americans are looking for a different experience than what our culture, for the most part, has provided so far.”

Dubnoff explained how there is a growing national movement that is transforming how elders are perceived and that services and programs are being reshaped to better meet their needs. More attention is being focused on the structuring of communities in order to support elders.

Dubnoff cited the AARP initiative, the walkability survey of communities in New York — looking at transportation systems that are responsive to older adults and making sure that community development plans include affordable and accessible housing for elders.

Loretto will provide some of that housing with the construction of 13 Green House residences in late fall 2010 or early spring 2011 in Cicero. The Green House model is a concept taking hold across America as traditional nursing home facilities are being replaced with small, home-like environments which house an average of 10 elders. The environment of a Green House supports individual choices and frees residents from much of the defined routines of a traditional nursing home. Individuals residing in the homes have the ability to schedule their daily routine based on activities they choose at the times they desire.

Three other events have been planned in the Syracuse community to commemorate Older Americans Month. On May 20, the sixth Annual Celebration Luncheon, an event that pays tribute to older adults and also raises funds to support Loretto, will be held at the OnCenter. On May 26, the National Senior Health and Fitness Day will be held at The Nottingham and on May 28, the  Service of Gratitude, a non-denominational service will be held at the chapel at The Heritage.

Following Dubnoff’s presentation, Chris Tanchak, MPA, Loretto Daybreak Adult Medical Day Program executive director, offered practical information on exploring future plans with family members for their long term care. “We urge adult children to ask their parents to begin thinking about it and to plan for it before they get in a crisis situation,” said Tanchak.

Long term care is a continuum of medical and social services designed to support the needs of people living with chronic health problems or disabilities that affect their ability to perform everyday activities. Long term care includes medical services, social services and housing. It helps meet health or personal needs and can be provided at home, in the community, in an assisted living facility or in nursing homes.

Tanchak said that before initiating the conversation with an elder, one should make a list of concerns, why one is concerned and then prioritize the concerns. One should also schedule the conversation for a time when the elderly person is feeling his or her best.

According to the Broome County Office for Aging, one should be prepared for resistance and, in that case, one should ask a family member, friend, doctor or social worker to talk to the elder.

Tanchak said that she recently asked some social workers to talk to her mother about obtaining services for her father who has Parkinson’s disease. She said that she had been talking with her mother for the previous two years about receiving services for her father. The social workers were successful in persuading her parents to accept help. Tanchak’s father, who has always been an avid gardener and who is unsteady on his feet, is now able to enjoy his hobby through the assistance of PACE (Program of All-inclusive Care for the Elderly).

Tanchak offered more suggestions to get the conversation started. “Be open,” she said. “If you have an open and direct relationship, don’t beat around the bush. And be reflective. Ask them about their past and move on to the future. What do they want most? What worries them? Ask for advice. Tell them you are thinking about your future and ask them how they are planning ahead. Grab an opening. For example, if your mother is talking about someone else, ask her what she would do or want to have done. Write — if you find the whole thing too daunting, write a letter outlining your concerns and what you’d like to discuss. This helps if you live far away. Get help — maybe you have a sibling who is more at ease talking with your family member. Maybe they are more comfortable talking to someone else. Don’t be offended.”