At 103, he was sharp as a tack and devout as a disciple 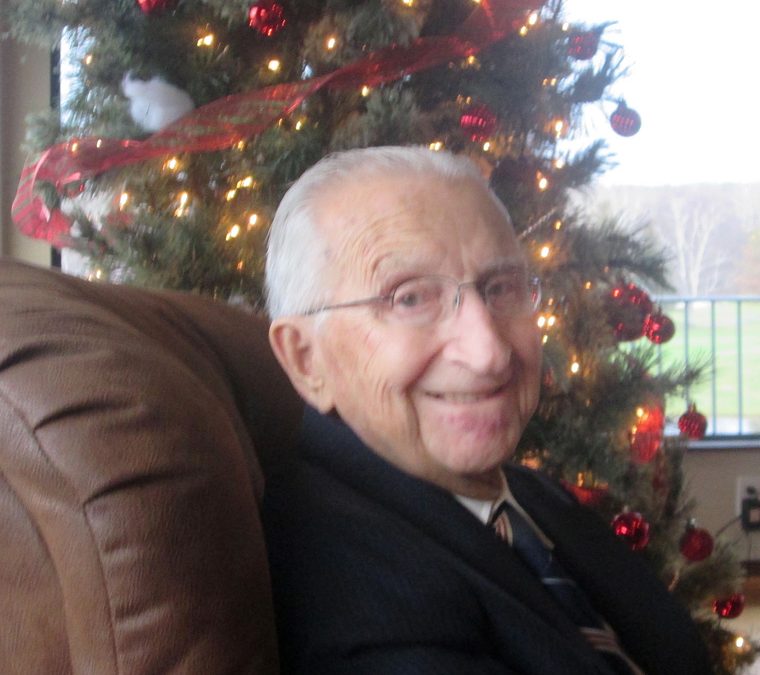 He went beyond the psalm into a category that astonished even his pastor.

Father Thomas J. Ryan, the pastor, cited Psalm 90:10: “Seventy is the sum of our years, or eighty, if we are strong.”

“The psalmist doesn’t even mention 90. Or 100. 103!” Father Ryan said at Luke’s funeral Mass attended by dozens of mourners on June 3. “In our friend Luke Pesane we have seen how age can continue to grow, in wisdom and in strength.”

“You’re not old till you hit 90,” Luke had told the Catholic Sun in 2017. “You’re not even entitled to worry about it. When you hit 90, even then you’re not entitled, because you think you’ve got a lot of years left.”

For years, Luke and his wife, Ruth, attended the early Mass at IC in Fayetteville, and then they switched to the 5 p.m. Saturday Mass, after which they went out to dinner with friends.

Ruth, who was known to kiss a visitor’s hands, died at the age of 97 on Dec. 8, 2017, after 75 years of marriage to Luke. In June 2017, they had been celebrated as the longest-married couple who had signed up for the Diocese of Syracuse’s World Marriage Day Mass.

Ruth grew up in Solvay and owned Ruth’s Style Shop, where she made wedding gowns and specialty dresses; she also worked for Syracuse Pottery for several years. Luke was from the North Side of Syracuse. He first saw Ruth at a dance hall in the mid-1930s in Syracuse. They married on April 25, 1942, and Luke served for three years in the Fourth Air Force during World War II.

Under the GI Bill, he graduated from Syracuse University in 1949 with a bachelor of science degree in sales management and psychology. Just as he had done at North High School, he worked a job while attending college. For six years in his 90s, Luke mentored students at SU’s Martin J. Whitman School of Management on how to interview for jobs. A couple of years ago the Whitman School published an online profile of Luke.

How proud he was of that moment, and the great pictures of him with the SU cap,” said Father Ryan, who concelebrated Luke’s funeral Mass with Msgr. Ronald C. Bill.

His obit notes that Luke worked for 30 years in management at Moore Business Forms. Later, as Father Ryan noted, Luke started a business in which Luke and Ruth recruited and placed executives in top management positions in area businesses.

“I just visited Luke about nine days before he died,” Father Ryan said, “and had a wonderful conversation with him, just wonderful, sharp as a tack. And it was just amazing anytime you saw Luke. But 103, I’m looking at this guy thinking, This is just amazing.”

Father Ryan quoted newspaper accounts of Luke’s life. In December 2017 the Sun quoted Luke’s speech to the dozens of guests at his 100th birthday party at the Cavalry Club: “I’ve had a great life. And people ask me, ‘What’s your secret?’ There’s really no big secret; a lot of it is attitude, the will to live, the interest in what’s going on. And, you gotta be lucky too — if you don’t have any life-threatening problems. So I’ve been lucky.

“I tell everybody: You can’t get to 90 without having some health issues. The main thing: Do something about it. Get the right doctors and the help you need, the medication you need.”

At the birthday party, Father Ryan noted, Luke’s daughter Patricia Burgess, of Cocoa Beach, Fla., said that Luke thrived on helping people: “He had a couple of friends that went blind. He helped them do things on their computer. He helped them get Braille, get books on tape. He’s taken people for dialysis treatments up at the VA. He’s driven them. I mean, in his 90s, that’s what he did. …

Father Ryan told the congregation that in 2015, he had asked for volunteers to go door-to-door for IC Parish’s 150th-anniversary capital campaign for the updating of the campus.

“Now that’s not a job people vie for — at all — going door-to-door asking for some type of a pledge,” Father Ryan said. “But who’s one of the first ones to show up: Luke Pesane, at 97 years old! Can you imagine?”

Father Ryan added, chuckling: “He was the oldest and probably the most successful volunteer that we had. And the people loved him! He was so successful; they just enjoyed him immensely.”

“He had an incredible life,” said Luke’s son, James Pesane, of Brewerton. He added: “He liked helping people and mentoring people … and in his 90s he was driving friends to the VA hospital to get treatment. … Saddest day of his life was the day he couldn’t drive anymore and he had to turn his leased vehicle in.”

Tough to keep up with

“He had so much energy, it was really tough to keep up with him. Even Jim and I had trouble,” said Luke’s daughter Susan Korzeniewski, of the Bahamas, who has won sailing championships. “And he was an extremely proud independent guy. He drove and owned a car till the age of 99. … To this day his driver’s license is still current.”

Luke’s granddaughter Erika Korzeniewski just earned her master’s degree in educational psychology and methodology and she is continuing studies for her doctorate in psychology at the University at Albany.

Reading the Prayer of the Faithful, Erika said: “Let us pray in gratitude for Grampa, for his life well lived, his faithful and abundant love of family and friends, his spirit of graciousness, and his concern for others; may he now be admitted into the company of saints, we pray to the Lord.”

“He would encourage me,” she said, “and he said, ‘You can do that, now go do it.’ And I did. … And I am now a councilperson in the Town of Pompey, which Dad encouraged me to go do.”

Asked who instilled in Luke the desire to do the Lord’s work, Susan said: “I don’t know. He got a message, I think, right?”