At audience, pope asks forgiveness for scandals in Rome, Vatican 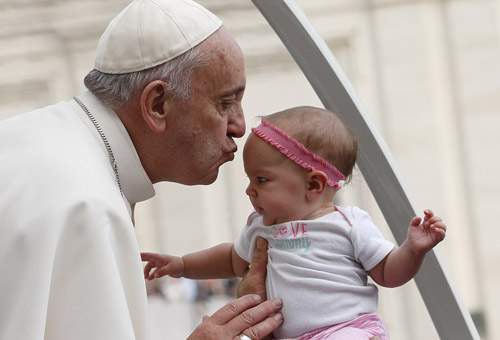 VATICAN CITY (CNS) — With 30,000 people gathered in St. Peter’s Square, Pope Francis asked forgiveness for scandals that have occurred within the church recently.

The pope’s off-the-cuff remarks Oct. 14 followed a reading from St. Matthew’s Gospel in which Jesus warns of scandalizing the “little ones.”

“Jesus’ words are strong, aren’t they?” the pope said. “‘Woe to the world for scandals.’ Jesus is a realist. He says it’s inevitable that there will be scandals, but ‘Woe to the one who causes the scandal,’” the pope told people attending his weekly general audience.

Pope Francis did not explain what scandal or scandals he was referring to, but his comments came during a week that saw the leak of a private letter sent to him by several cardinals expressing concern with aspects of the Synod of Bishops on the family.

Jesuit Father Federico Lombardi, Vatican spokesman, told reporters later, “if the pope uses a broad and general formula, that is what he intended” and it is not up to the spokesman to offer specifics.

In his main talk on the family, the pope reflected on the promises adults make to children born into the world. “Welcome and care, closeness and attention, trust and hope, are among the basic promises which can be summarized in one word: love,” he said.

Betraying a child’s trust through scandal causes a terrible wound in their lives, one that “they do not have the means to comprehend,” he said.

“Woe to those who betray their trust, woe!” he said. “Their complete trust in our promise, which obliges us from the first moment, will judge us.”

“I would like to add another thing, with respect, but also frankness, for everyone,” Pope Francis said. “Their spontaneous trust in God must never be wounded, especially when it occurs because of a certain presumption — more or less unconsciously — to substitute ourselves for God. The tender and mysterious relationship between God and the soul of children should never be violated.

Highlighting the importance of the love for one’s children, the pope called on parents to be “instruments of God’s love. Only if we see children with the eyes of Jesus, can we truly understand how, in defending the family, we protect humanity,” the pope said.

Before the general audience, the pope met with 700 sick and disabled people who were gathered in the Paul VI audience hall. As he was greeting them, he invited a small child who approached the steps to come up. “Come, come here,” the pope said. The child turned back, grabbed his mother’s hand and greeted the pope with a hug.

Among those present in St. Peter’s Square were the 33 Chilean miners who were trapped underground for 70 days at the Copiapo mines in 2010. “I believe that any one of you is capable of coming up here and telling us what hope means. Thank you for hoping in God,” the pope told them.