At Bangui mosque and Mass, pope prays for ‘salam,’ peace 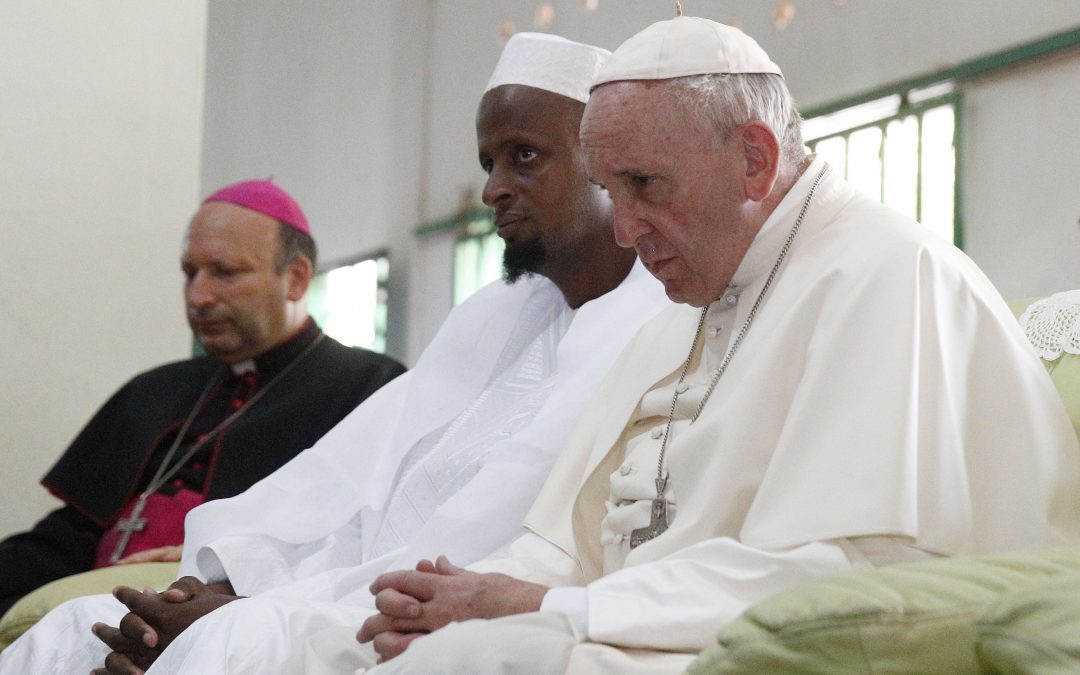 In a country where political and ethnic rivalries also have split the population along religious lines, Pope Francis began Nov. 30 with a visit to the Koudoukou mosque in Bangui.

After two years of civil war, much of the recurrent violence in the country involves the murder of a Christian or a Muslim, then retaliations from members of the other community. Most areas of Bangui are divided into Christian or Muslim neighborhoods with “buffer zones” between them patrolled by U.N. peacekeepers.

“God is peace, ‘salam,’” the pope said in his speech at the mosque, where armed U.N. peacekeepers monitored the crowd outside from each of the three minarets.

“Christians and Muslims are brothers and sisters,” created by the same God, he said, and they must act like it.

“Together, we must say no to hatred, to revenge and to violence, particularly that violence which is perpetrated in the name of a religion or of God himself,” Pope Francis insisted.

“The recent events and acts of violence which have shaken your country were not grounded in properly religious motives,” he said, but some have used God’s name as an excuse for their actions, which “disfigures the face of God.”

Pope Francis prayed that the elections scheduled for Dec. 27 would be a symbol and victory of national unity rather than being seen as the victory of one particular faction.

“Make your country a welcoming home for all its children, regardless of their ethnic origin, political affiliation or religious confession,” the pope urged the people.

Tidiani Moussa Naibi, the imam of the mosque, assured the pope that Central African Christians and Muslims know that they are brothers and sisters. “Trouble mongers could delay the completion of a particular project of common interest or compromise for a time a particular activity, but never, ‘inshallah,’ (God willing) can they destroy the bonds of brotherhood that unite our communities so solidly.”

After the speeches, Pope Francis asked the imam to show him the mihrab, which indicates the direction of Mecca, the direction Muslims face when praying. The pope and imam stood in front of it for several moments of silence.

The Catholic archbishop of Bangui, the president of the country’s evangelical Christian alliance and another imam have been leading a very public campaign of education and cooperation to end the violence. The three were present at the mosque for the pope’s visit.

Afterward, the pope visited the camp for displaced people that has sprouted around the mosque, just as other camps have mushroomed around the city’s Catholic parishes.

To show just how special the visit was, Pope Francis personally opened the Holy Door at Bangui’s cathedral Nov. 29, nine days before the official opening of the Year of Mercy.

The last event on the pope’s schedule was a Mass in a sports stadium, where he urged the Catholic community to participate in the Year of Mercy by moving forward courageously toward peace and reconciliation.

The country’s bishops chose “Cross to the Other Side” as the theme for the pope’s visit, and he told people in the stadium that even though the elections are only four weeks away, they are still only in midstream in their journey to the side of peace.

All Christians, he said, need to break the habits of sin and division, which are “ever ready to rise up again at the prompting of the devil. How often this happens in our world and in these times of conflict, hate and war! How easy it is to be led into selfishness, distrust, violence, destructiveness, vengeance, indifference to and exploitation of those who are most vulnerable.”

Pope Francis urged the country’s Catholics to hold fast to their faith, sharing it with all they meet through words and, especially, gestures of care, peace and reconciliation. At the end of Mass, the pope gave a special greeting “of joy and fraternity” to Ecumenical Patriarch Bartholomew of Constantinople, wishing him — “from the heart of Africa” — a happy feast of St. Andrew.

“I ask the Lord to bless our sister churches,” he said.

The evening before, after celebrating Mass with priests, religious and catechists, the pope joined the young people who had watched the liturgy from outside the cathedral. They were holding a prayer vigil into the night, with special permission to stay outside the cathedral beyond the 8 p.m. curfew in the violence-torn city.

The centerpiece of the event, though, was the Sacrament of Confession, which Pope Francis personally administered to five youths.

He urged the young people to pray often, to forgive those who hurt them and to be courageous enough to stay in their country and work for peace.