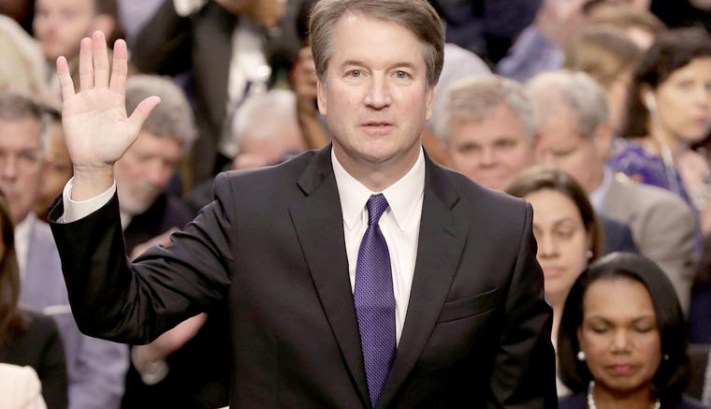 WASHINGTON (CNS) — During the second day of his Supreme Court confirmation hearing before the Senate Judiciary Committee Sept. 5, U.S. Appeals Court Judge Brett Kavanaugh said his experience serving the homeless with Catholic Charities and tutoring at Washington Jesuit Academy has influenced him as a judge because of the importance of “standing in the shoes of others.”

Kavanaugh noted that he regularly serves meals with Catholic Charities’ St. Maria’s Meals program in Washington and he said talking to the people whom they serve helps him to understand the situation that they are in.

“We are all God’s children. We are all equal,” he said. “People have gotten there because maybe they have a mental illness; maybe they had a terrible family situation; maybe they lost a job and had no family. But every person you serve a meal to is just as good as me or better.”

Kavanaugh noted Msgr. John Enzler, the president and CEO of Catholic Charities for the Archdiocese of Washington, as an important influence in his life who has helped him to think about others. He has known Msgr. Enzler since Kavanaugh was 9 years old and an altar boy at Little Flower Parish in Bethesda. The priest was in the audience at the White House when President Donald Trump announced that Kavanaugh would be the next Supreme Court nominee July 9.

Kavanaugh said he “tries to follow the lesson of serving the least fortunate among us” as outlined in those six examples.

He also tutors at Washington Jesuit Academy in Washington, which is a tuition-free Catholic middle school where low-income students receive three meals and do their homework before returning home from school.

“You can’t change everything at once, but just being able to change one meal, one day…or (have) one kid who remembers one thing in a tutoring session…you can make a big difference in people’s lives,” he said.

To describe the way that those experiences have influenced him as a judge, he borrowed the words of a lesson about “To Kill a Mockingbird” by his sixth-grade English and religion teacher, Chris Abell, at Mater Dei School in Bethesda. While they were learning about the book, Kavanaugh said his teacher emphasized the theme of “standing in the shoes of others.”

He still has his sixth-grade copy of “To Kill a Mockingbird” sitting in his chambers.

Sen. Lindsey Graham, R-South Carolina, asked him if it is fair to say that as a judge, he should be sitting in the shoes of the law, rather than in the shoes of someone he is sympathetic to.

“You’re in the shoes of the law, but with awareness of the impact of your decisions,” Kavanaugh responded. “You can’t be unaware when you write an opinion how is it going to affect people.”

Kavanaugh is currently a judge on the U.S. Court of Appeals for the District of Columbia Circuit, and if he is confirmed, he will join four other Catholic judges on the bench and retain the court’s Catholic majority after the retirement of Justice Anthony Kennedy.

The nominee is a graduate of Georgetown Preparatory School in North Bethesda, Maryland. The court’s newest justice, Neil Gorsuch, also graduated from that school. Kavanaugh and his wife Ashley and their daughters Margaret and Liza are members of the Shrine of the Most Blessed Sacrament Parish in Washington, where the judge coaches a CYO girls’ basketball team. He also belongs to the John Carroll Society, a group of Catholic lawyers and professionals in the Archdiocese of Washington.