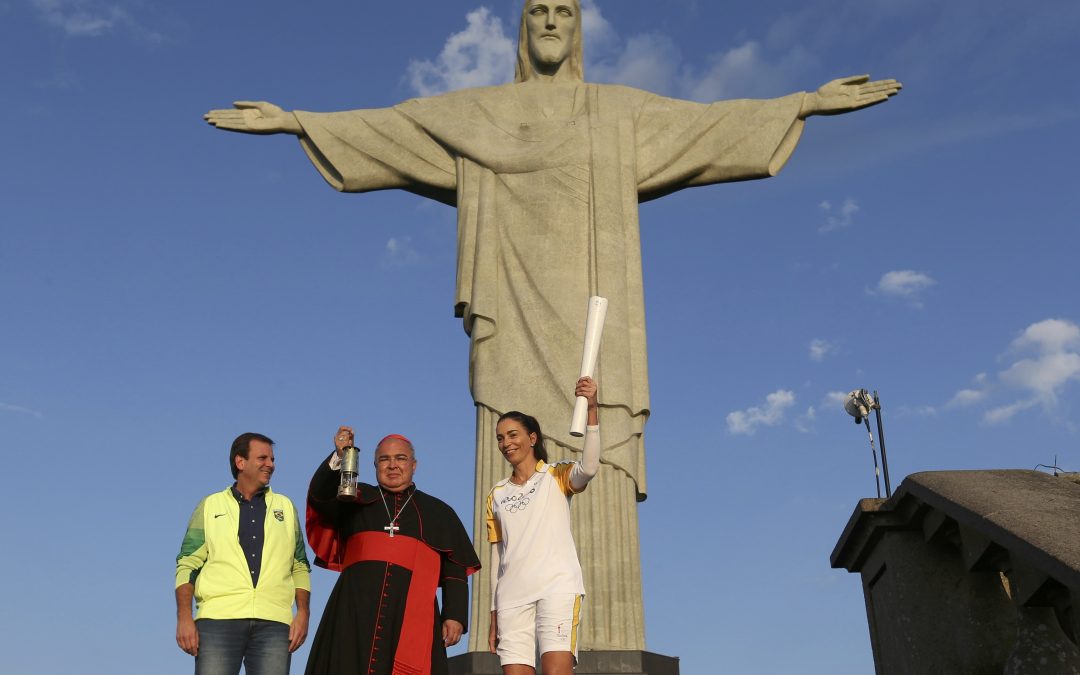 “This is the moment for us to surpass our difficulties and work together as a team, making our country and our world safer, less unequal, and putting love in the hearts of all,” the cardinal told reporters.

From there, the Olympic torch was carried on the last leg of its 95-day Brazilian journey toward Maracana Stadium, where the opening ceremony was to be held the evening of Aug. 5.

Father Omar Raposo, rector at the Christ the Redeemer Sanctuary, located at the base of the statue, said the blessing was not scheduled by the Games’ organizers, but was requested by Rio Mayor Eduardo Paes, a Catholic.

Father Raposo said having the torch lit at the statue “has a lot of spiritual meaning” in the predominantly Catholic country.

“The Christ, with his open arms, welcomes and protects all the peoples of the world, but Brazilians hope that the luck transmitted by the statue will remain with our Brazilian athletes,” said a smiling Father Raposo.

The statue, one of Rio de Janeiro’s most famous landmarks, has been a required stop for most tourists visiting the city, a fact that has not gone unnoticed by Olympic organizers and city officials. Due to concerns of possible terrorist attacks during the Olympics and Paralympics, officials have stepped up security on popular landmarks, like the statue. Metal detectors are expected to be in place, and at least 30 armed forces personnel will be guarding the statue 24 hours a day until the end of September.

“The Brazilian armed forces will be in charge of securing landmarks, airports and competition venues,” said a spokesman for Brazil’s army. Officials said more than 85,000 security personnel will be in place during the Games, including army, air force, marines, military police, as well as state and municipal police.

“The sanctuary is the gateway for visitors coming to Rio. This is an opportunity to make sure tourists see the Christ [statue] in a safe environment,” he said.

He said the sanctuary estimates it will receive up to 10,000 visitors per day during the Olympics and Paralympics, almost double the normal number during holidays. Tickets for the tram are almost sold out for the entire period of the Games.