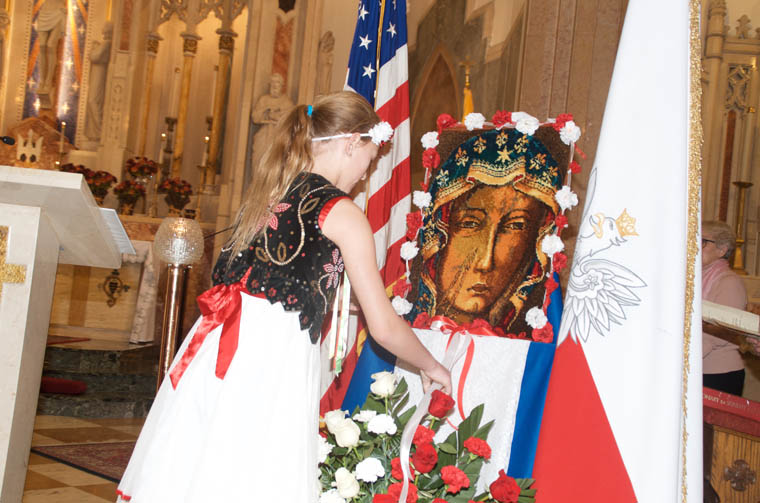 Submitted by the Basilica of the Sacred Heart of Jesus

The Polish community gathered Nov. 11 at the Basilica of the Sacred Heart of Jesus in Syracuse to celebrate a Mass of Thanksgiving on the 100th anniversary of Poland’s independence, praying for God’s continued blessings for the country of their ancestors and upon the Polish people around the world.

On Nov. 11, 1918, the dream of generations of Poles came true: The Polish state was reborn. Following the 123 years of partitions among the Austrian, Russian, and Prussian powers, free Poland was reinstated on the map of the world. Regaining independence occurred due to the devotion and heroism of so many. In spite of all the persecution, hardships, and suffering, the spirit of the Polish people was preserved by the prayerful spirit of the nation as well as by the everyday endurance of Polish families.

The first partition actually took place in 1772; Poland lost parts of its land but still existed in Europe. Then, following the signing of Poland’s Constitution, the first in Europe, Poland went to war in 1795 with neighboring powers and was ultimately divided up under Austrian, Russian, and Prussian rule. Poland disappeared from the maps of the world, officially did not exist.

Finally, on Nov. 11, 1918, World War I came to an end and after many efforts Poland regained its independence.

Independence Day in Poland is celebrated annually on Nov. 11, with the exception of another difficult time period — after World War II, the communist rule, under which  the holiday was forbidden. It was reinstated in 1990 following the demise of communism and the fall of the Berlin Wall.

However, in those difficult years of communism, a new hope for Poles arose when the cardinal from Krakow, Karol Wojtyła (St. John Paul II), was chosen a pope in 1978.

Two years later, in 1980, Solidarity was founded, the first mass independent trade union in communist states. This reform movement eventually broke Soviet control in Poland and in Eastern Europe. The first elections of the Third Polish Republic were held in 1989 and the country entered a period of transition from a communist state to the capitalist economic system and liberal parliamentary democracy. A modern Polish state arose.

This independence, regained 100 years ago by the prayers of so many and won by the efforts of Polish people, became for them a true sign of freedom. The Polish people became free, grounded in faith and co-responsible for their reborn country. However, the independence regained 100 years ago requires of all generations of Poles the responsibility of taking care of the Homeland, by faithfully keeping their faith and traditions.

As we celebrated the Solemn Mass for Poland and the Polish people in Poland and the Polonia around the world, we prayed for God’s continued blessings for the free and independent Poland, entrusting Poland once again to the powerful protection of Our Lady of Czestochowa, the Queen of Poland, so they may live always true to the faith and tradition, faithful to God and to the Gospel.