Be lifeline of hope for youth alienated from church, pope tells synod 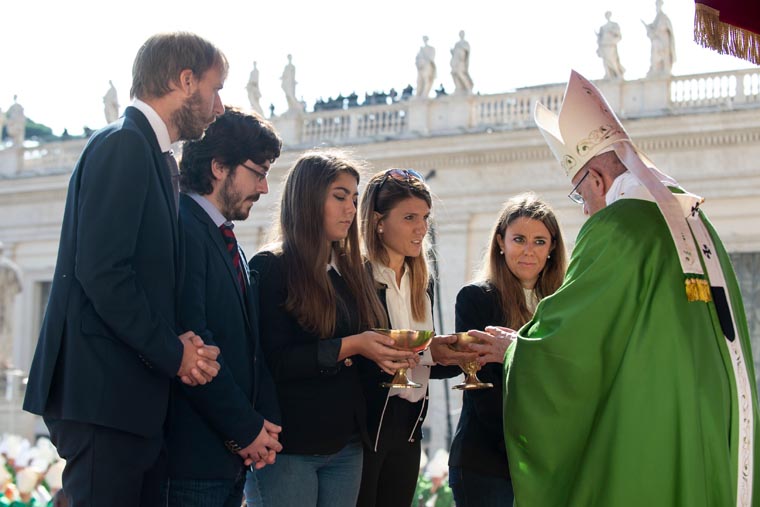 VATICAN CITY (CNS) — Setting the stage for a monthlong gathering of bishops, Pope Francis urged synod fathers not to be crushed by “prophets of doom,” but to be the signs of hope and joy for which today’s young people yearn.

“Anointed by hope, let us begin a new ecclesial meeting,” he said in his homily at Mass Oct. 3, opening the Synod of Bishops, which was to meet until Oct. 28 to discuss “young people, the faith and vocational discernment.”

Filled with hope and faith, he said, the synod members can “broaden our horizons, expand our hearts and transform those frames of mind that today paralyze, separate and alienate us from young people, leaving them exposed to stormy seas, orphans without a faith community that should sustain them, orphans devoid of a sense of direction and meaning in life.”

Among the hundreds of synod participants and thousands of guests celebrating Mass in St. Peter’s Square were two bishops from mainland China, the first from the communist country to attend a synod. With his voice shaking, the pope offered them “our warm welcome: the communion of the entire episcopate with the Successor of Peter is yet more visible thanks to their presence.”

Standing in front of St. Peter’s Basilica, which was decorated with a tapestry depicting St. Michael the Archangel battling the devil and one of St. Joseph holding baby Jesus, Pope Francis told synod participants that young people want help in facing today’s challenges and need their commitment “to work against whatever prevents their lives from growing in a dignified way.”

“They ask us and demand of us a creative dedication, a dynamism which is intelligent, enthusiastic and full of hope,” he said.

“They ask us not to leave them alone in the hands of so many peddlers of death who oppress their lives and darken their vision.”

He reminded the bishops that when most of them were young, Blessed Paul VI called on them during the Second Vatican Council to lead the way in renewing the world through Christ.

Quoting the soon-to-be saint’s message to young people in 1965, the pope recalled how the church was depending on them — as young people of the day and the future of the church — to “express your faith in life” and faith in “a good and just God.”

The late pope, he said, called on them to be open to the world, listen to and serve their brothers and sisters, “fight against all egoism. Refuse to give free course to the instincts of violence and hatred which beget wars and all their train of miseries. Be generous, pure, respectful and sincere, and build in enthusiasm a better world than your elders had.”

The memory of Blessed Paul’s appeal and of the bishops’ own youthful faith and passion for Christ must be rekindled “and renew in us the capacity to dream and to hope,” Pope Francis said. “For we know that our young people will be capable of prophecy and vision to the extent that we, who are already adult or elderly, can dream and thus be infectious in sharing those dreams and hopes that we carry in our hearts.”

May this memory never be “extinguished or crushed by the prophets of doom and misfortune, by our own shortcomings, mistakes and sins,” he added.

The pope asked synod members to participate in the upcoming discussions with an “attitude of docile listening to the voice of the Spirit” and to each other “to discern together what the Lord is asking of his church.”

“This demands that we be really careful against succumbing to a self-preservation and self-centeredness which gives importance to what is secondary, yet makes secondary what is important,” the pope said.

With love for the Gospel and the faithful, synod members must aim to follow God’s will and “an even greater good that will benefit all of us. Without this disposition, all of our efforts will be in vain.”

“The gift of that ability to listen, sincerely and prayerfully, as free as possible from prejudice and conditioning, will help us to be part of those situations which the people of God experience,” he said.

Listening to God and listening to the people reflecting on what they hear God calling them to is the approach the synod should take, the pope said, because it will protect “us from the temptation of falling into moralistic or elitist postures, and it protects us from the lure of abstract ideologies that never touch the realities of our people.”

Among the prayers of the faithful was, in Chinese, the prayer that the spirit of wisdom and discernment help the pope and bishops “seek the truth with an open heart and in all things be obedient” to God’s will.

At the end of Mass, the pope walked along the rows, greeting and speaking briefly one-by-one with the bishops and special delegates attending the synod. He also greeted the faithful and visitors in the square from his popemobile as the bells of the basilica rang.

Among those in St. Peter’s Square was Deacon Javier Ayala of Santiago, Chile, a member of the Legionaries of Christ, studying in Rome.

He told Catholic News Service it was now “time for the bishops to reflect on these conclusions and to find the best way to reach out to young people.”

Deacon Ayala, who is to be ordained a priest in Rome next year, assisted in the presynod process of collecting thousands of responses to a questionnaire and feedback via social media from young people; he also took part in a presynod meeting of young people in Rome in March.

“The church is a mother and she knows that there are many young people outside and wants to call them; she wants to invite them because (the church) isn’t just another institution. She wants to lead them to Jesus Christ who is the way, the truth and the life,” he said.

Many young people, he told CNS, said they need to be accompanied and need witnesses who are “happy, humble and close.”

“We shouldn’t expect precise solutions from the synod nor calculations,” he said. The point of the synod is “to keep reflecting on the best pastoral ways to reach young people. I don’t think this is an ending point, but rather a starting point that is part of the new evangelization of the church.”