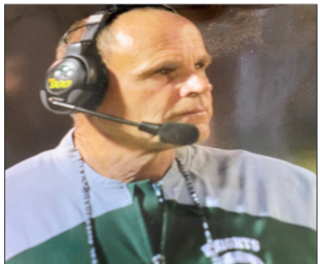 Retiree coached for 36  years, taught for 28  with dignity and class

As a new head coach, he had “wanted to jump in headfirst.” As a new retiree, he can walk 1.5 miles and jump into the Gulf of Mexico.

Mike Rogers now divides his loyalties between New York and Florida, but for 36 years he was loyal to showing up at Bishop Ludden Jr./Sr. High School in Syracuse. Reached by phone Dec. 17 in Venice, Fla., he was planning to hit the beach, but not with a fishing pole. “I didn’t really fish or hunt,” he explained, “I was at Ludden.”

For 28 years, he taught American history, and for 36 years he coached various sports. “Student athletes and the school did more for me than I did for them,” he said, “so I was very happy there. … We had hardworking girls and boys that I coached.”

“He has been a great ambassador for Bishop Ludden not only in his 36 years of coaching but 28 years as a teacher here as well,” Driscoll wrote. “He has done everything with dignity and class. He has never sacrificed his own integrity or the school’s integrity to win any game or sport that he was coaching. We are certainly going to miss him and the many contributions he has made to Bishop Ludden as a coach, teacher and parent.”

Rogers played sports in high school but in college, he said, “I was focused on my grades.”

What did he find compelling about American history and politics? “I love my country,” he answered, “and I’ve always been quite political, so it was a good match—political science, history-type courses, stuff like that.”

For a couple of years starting out, Rogers was the head coach of three varsity sports. His last sport coached was football. “We had a very good year this year,” Rogers said. “We ended up 19th in the state, and we got to the sectional semis. Had some good wins; we won three games in the spring so we won eight games in the last seven months or six months so we had some really good success. …

“We only had 22 guys and it’s a challenge at the private schools; you don’t have JV, so you have quite a mixture on the varsity and all that type of stuff but it’s great kids.”

His best year coaching girls varsity basketball was 1991—the Final Four. “That was very exciting,” he recalled, “’cause we started out kind of building the program and it was exciting to get down there. We didn’t win it but I’ll remember those kids forever.”

His best year coaching varsity softball was 2005. “We just kind of started out .500,” he said. “It was my first year coaching. The coach had resigned and I was still helping baseball at the time when they asked me if I’d coach. … We were like 4 and 4 and then we went on like a 12-, 13-game winning streak and we rolled through the [sectional]; I had a really good pitcher.”

“Football’s fantastic to coach,” he said, because “it never ends. … You can’t say, I’ll see you Memorial Day or something. You gotta have the weight room goin’ and all that stuff.”

Best in the state

“They were more like us sizewise and that type of thing,” Rogers remembered, “so it wasn’t a bad matchup for us. … We felt good … going into that game.”

“We’ve had some good teams recently too,” he said. One recent Ludden team was top 5 in the state and lost the championship to Dolgeville, then moved up to Class B. “We didn’t whine about it, we just went out and played,” he said. Now Ludden plays in Class C, which he said could be the toughest division in Section III.

“My wife [Theresa] was a big part of this,” Rogers said, “’cause I had four kids and I wasn’t home as much as I probably could have been” due to all that coaching. Theresa was a “very active football mom,” running the concession stand, “all that extra stuff,” he said. Theresa is still involved in an educational gig part time in the Syracuse area.

A coach appreciates a modicum of listenership. Asked about his style, Rogers said he was “probably too much on the long-winded but you are who you are, you know?” If two or three kids are listening, he figures it’s worth it if they remember what he said five or 10 years later.

Does he ever hear from the old players?

“Quite a few now, yeah,” he said. “I’ve had some real nice messages so that makes you feel good.”

He would advise neophyte coaches: “Give it your all. It’s like if you’re not giving your all you can’t expect the players to buy in. You better watch the film, you better be well prepared. … So you have to do the work, however long it takes, and you kind of gotta be true to yourself, I think. If you’re a calm guy, be a calm guy; if you’re a holler guy, high-energy guy, be that. Be who you are.”

When up North, he lives in DeWitt; now, though, he’s in a manufactured home in a park on a harbor in Venice, about 15 miles south of Sarasota. “It’s beautiful. Yeah, it’s nice,” he said on an 84-degree sunny day there.

The high-energy guy still does a run or some type of workout every morning. “I gotta see what happens after the winter,” he said, “I think I’m gonna love it down here. … Probably somewhere down the road I could see myself volunteering somewhere, someplace on a limited basis for some sport. We’ll see. … Maybe I’ll run for dogcatcher down here, I don’t know.” He laughed, and why not, with the beach ahead.