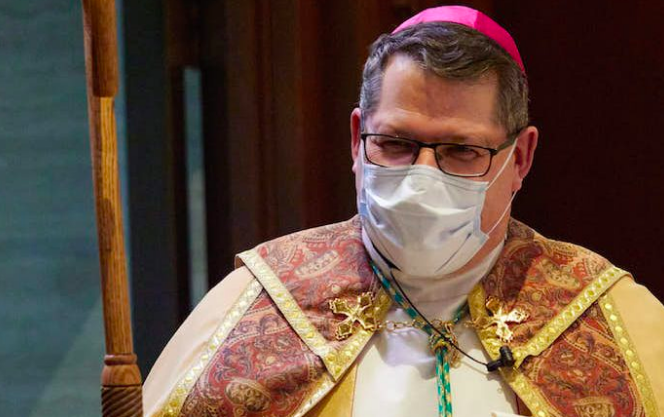 Some Onondaga County parishes are reducing capacity and further restrictions are possible as new COVID-19 cases and hospitalizations rise across New York state and nationwide.

Parts of Binghamton, Johnson City, Endwell, and Endicott in Broome County were designated a yellow zone in early October. The state lifted that designation Nov. 18 after a decline in the area’s COVID-19 positivity rate.

Oneida County has also seen a dramatic increase in COVID-19 cases in recent weeks, but the state has not designated the county a yellow zone.

New York’s Micro-Cluster Strategy identifies clusters and categorizes the areas around them into one or more zones (yellow, orange, and red zones) with corresponding levels of restrictions based on the transmission of COVID-19 cases. In yellow zones, houses of worship are restricted to 50% of capacity, according to state guidelines. That drops to the lesser of 33% or 25 people in orange zones, and the lesser of 25% or 10 people in red zones.

Parishes in the orange zone “must remain open” and “Sunday and weekday Masses are still to be offered, even if for a reduced congregation,” Bishop Douglas J. Lucia wrote in a Nov. 23 letter to the diocesan community. “Also, the planned hours for the Sacrament of Penance (Confession) should be maintained.”

On Nov. 24, the bishop authorized orange zone parishes to add a 3 p.m. Vigil Mass to provide an additional opportunity for parishioners to attend Mass. The Cathedral of the Immaculate Conception, which is in Syracuse’s orange zone, is limiting attendance to 25.

Catholics in the diocese remain dispensed from the obligation to attend Sunday Mass; Bishop Lucia issued the dispensation March 13.

All 22 diocesan schools reopened in September with full-day, in-person instruction five days a week. About 6% of the diocese’s some 4,300 pre-K through grade 12 students have been receiving fully remote instruction since September.

person students and faculty. Schools in

orange and red zones were to close and

provide remote instruction only; they

were permitted to reopen after four days of closure and testing of all in-person students and staff.

All tests Nov. 30 at Most Holy Rosary, Cathedral Academy at Pompei, and Holy Cross and Dec. 1 at Blessed Sacrament were negative; in-person instruction has resumed.

“We are delighted to be able to continue in-person, five-day-a-week instruction for families desiring to be in school,” Superintendent of Catholic Schools William Crist said. “I am thankful for our teachers, principals, and families for continuing to see the strength of a Catholic school education during this pandemic.”

A Nov. 25 U.S. Supreme Court ruling does not change the diocese’s policies

limiting congregation sizes at parishes in orange zones. The Diocese of Brooklyn and two synagogues had sought an injunction against Cuomo’s pandemic executive order limiting in-person congregations at houses of worship in red and orange zones to 10 or 25 people while allowing “numerous secular businesses to operate without any capacity restrictions.” The Supreme Court ruled 5-4 that the order violated the petitioners’ free exercise of religion. The ruling blocks New York from enforcing these limits on attendance while the petitioners pursue their case with the U.S. Court of Appeals for the 2nd Circuit, according to Catholic News Service.

In a Nov. 27 letter, Bishop Douglas J. Lucia underlined “the need to exercise extreme caution due to the rampant spread of the coronavirus in our communities” and said “we need to stay the course we set out on earlier in the week.”

Abiding by the state’s rules, he wrote Nov. 23, is “for the greater public good.”

The statewide hospitalization rate has increased 128% over the last three weeks, state officials said. More than 647,900 people in the diocese’s seven counties had tested positive by Nov. 29, according to the New York state website. Nearly 550 people had died of COVID-19 by that date.

New York reported 42 COVID-19 deaths statewide for Nov. 29. The daily deaths number had been at single digits a month ago.

Gov. Andrew Cuomo outlined new state initiatives to prevent overwhelming hospitals, as happened in some areas in the spring. If hospitals do become overwhelmed, Cuomo said he could impose targeted shutdowns, or order a statewide “pause” as he did in March.

The restrictions are “not a direct attack on religion or religious gatherings,” the bishop wrote Nov. 23, repeating the perspective he has shared publicly several times since the beginning of the pandemic. “Rather, it is a response to the spread of a deadly disease which in part has occurred because some individuals within our communities have chosen to disregard important safety protocols, i.e., not wearing masks, not social distancing, and having large gatherings.”

Writing a few days later, the bishop said: “It is my hope that by taking this cautionary approach now more drastic measures will not have to be taken as we approach the Christmas season.”