Bishops throw support behind another bill to protect undocumented youth 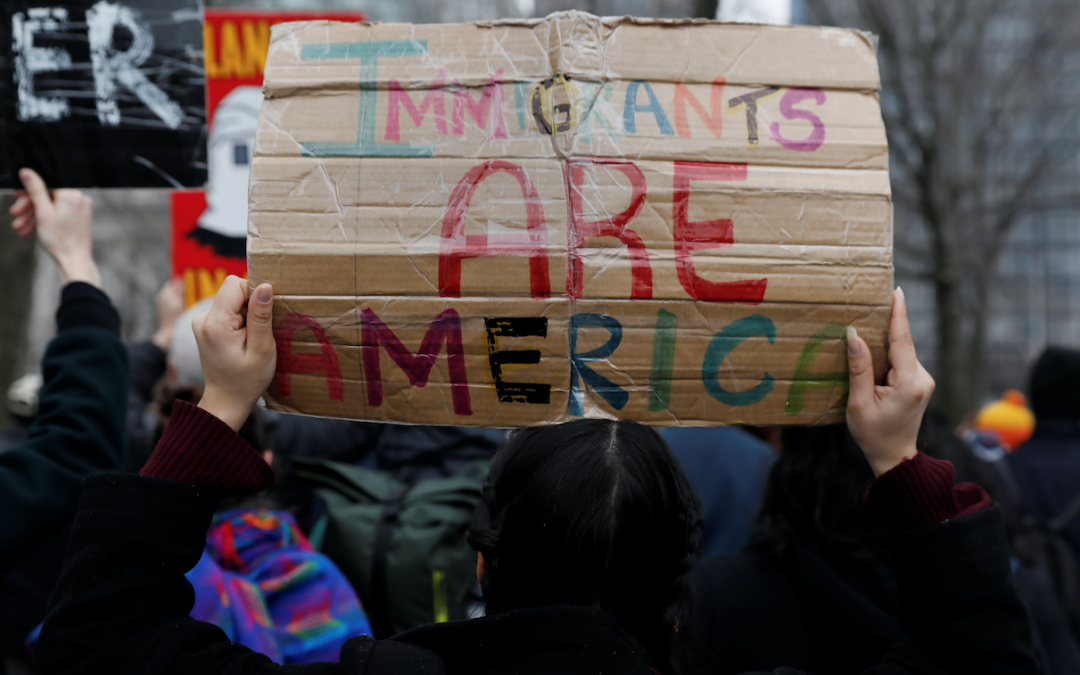 WASHINGTON (CNS) — The head of the U.S. bishops’ Committee on Migration announced support April 25 for a bipartisan bill that provides a pathway to citizenship for young adults brought into the country as minors without legal documentation.

The proposed bill also calls for an increase in security at the border between Mexico and the U.S., an increase in immigration judges, and ties U.S. aid to certain Central American countries based on their efforts to address smuggling and steps to combat corruption as well as to strengthening rule of law at home.

In a statement, Bishop Joe S. Vasquez, of Austin, Texas, voiced his support for what’s called the USA Act, or “Uniting and Securing America” Act of 2017. The proposed legislation was introduced earlier this year by Representatives David Aguilar, a Democrat from California, and Will Hurd, a Republican from Texas.

“We are hopeful our support of the current version of the USA Act, and our continued support of the Dream Act, will encourage Congress to act now and find a humane legislative solution for Dreamers,” said Bishop Vasquez, referring to the group of young adults who would be affected by the legislation.

As a group, they are referred to as “Dreamers,” a reference to the Development, Relief and Education for Alien Minors Act, or DREAM Act, a proposed bill in Congress aimed at granting legal status to many of the young adults as long as they meet certain criteria. Over the years, the bill has had support but never enough votes to pass.

Instead, many of the so-called “Dreamers” benefited from the Deferred Action for Childhood Arrivals, or DACA, program enacted by the executive action in 2012 by then-President Barack Obama. President Donald Trump rescinded the program in September while urging Congress to find a legislative solution, but lawmakers have been unable to find one. On April 24, a federal judge for the District of Columbia dealt a blow to the Trump administration’s attempt to end the program saying its attempt to terminate the DACA program on the grounds that it was “unlawful” was “virtually unexplained.”

The statement from Bishop Vasquez said “the USA Act would provide qualifying Dreamers with protection from deportation, as well as a path to citizenship.” While DACA protects the young adults from deportation and provides work permits and other documents, it does not allow beneficiaries to apply for citizenship or any sort of permanent legal status.

The USA Act proposal also seeks to protect more than the 800,000 young adults who benefited from DACA and may also include those who have benefited from the Temporary Protected Status program.

“Every day, my brother bishops and I witness directly the constant anxiety of Dreamer youth and their families, and that experience of urgency moves us to press Congress for an immediate and durable solution to this problem,” he said in the statement.

Los Angeles Archbishop Jose H. Gomez, vice president of the U.S. bishops’ conference, also weighed in, saying that the “time has come for our leaders in Congress to do what is right and pass legislation that will provide a permanent solution for the nearly 2 million young people who were brought to this country as small children by undocumented parents or family members.”

In an April 25 column, he said more than a quarter of the Dreamers live in California, the state where his archdiocese is located, “and by most estimates there are about 125,000 living within the borders of the Archdiocese of Los Angeles — more than anywhere else in the country.”

“The USA Act is compromise legislation that has bipartisan support,” he said. “For several years now, immigration reform has been blocked in the House [of Representatives] by a small group of lawmakers who are using their leverage to prevent any legislation from being brought up for a vote on the House floor. This situation is not fair and in fact it frustrates the will of the American people.”

In the column, he urges Speaker of the House Paul Ryan, and Majority Leader of the House Kevin McCarthy, both Republicans, “to allow debate on this critical issue.”

“There is no reason for the House of Representatives, the people’s chamber, to continue to deny a vote on this issue,” he said. “This is not about Republicans or Democrats. It is about right and wrong.”

He continued: “As I have been saying for years now, both parties are using this issue for their own political gain. Even now, we can see there are still some who seem content to sacrifice the Dreamers’ futures for the chance to mobilize voters in the next election. This is heartless and cruel. It is time to stop. People’s lives are in the balance.”

Kevin Appleby, senior director of international migration policy for the Center for Migration Studies and the Scalabrini International Migration Network, said that “while not perfect,” the USA Act gives Dreamers a chance to obtain citizenship “without giving up a border wall in return, reduces immigration court backlogs, and attempts to address the push factors in Central America that are often ignored in Washington.”

It also may have one of the best chances of passing in Congress.

“I could see it gaining political traction, especially after the mid-terms, but the wild card, of course, would be whether President Trump would accept anything that does not at least fund his ill-advised border wall,” Appleby said.