Blessed are thou amongst women

FrancisCorps members reflect on being women of service 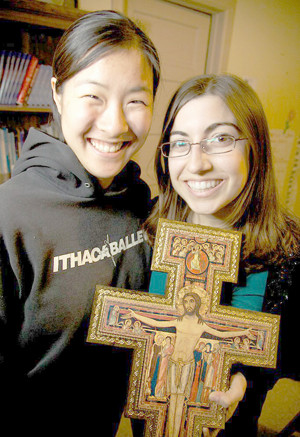 For most young women, those first few years after college are often devoted to searching: for good jobs, for good apartments, for someone nice to bring home to Mom and Dad.

For the young women taking part in this year’s program at FrancisCorps, however, the search is for a better understanding of the role they can play in serving others.

FrancisCorps is a year-long Franciscan lay volunteer program for men and women ages 21 to 25. The group lives and prays together in a house near the Franciscan Motherhouse in Syracuse, and each member has the opportunity to work in an area of ministry that appeals to him or her.

Women outnumber the men four to two in FrancisCorps this year.
Along with Syracuse native Anthony Mangan and Jeffrey Musyt from Ollyphant, Pa., this year’s group of FrancisCorps volunteers includes Sarah King from Green Bay, Wis., Kathy Shuler from Ithaca, Cathleen Zupan from Cazenovia and Meghan Rohrbaugh from Newton, Pa.

While each of the four women share a dedication to service, they came to FrancisCorps in completely different ways.

Meghan Rohrbaugh found herself at a loss as to what to do once she graduated from Catholic University in Washington, D.C. She was wandering through a volunteer fair at the school and turned to one of the campus ministers for help. “And she said, ‘Go and talk to Brother Jim,’” Rohrbaugh said.

Brother Jim Moore, OFM Conv., is the founder and director of FrancisCorps. “There was just something about Brother Jim that I really liked,” Rohrbaugh said. She also liked that FrancisCorps is a small program with one group in Syracuse and one in Costa Rica.

Rohrbaugh works in the afterschool program for children ages five to 12 at Vincent House, a neighborhood center. She also helps with Vincent House’s food pantry.

“It’s definitely been an adjustment, and it’s been challenging, but honestly, the support that I have from the five other volunteers that I live with has been awesome,” she said.

Rohrbaugh said she also relies on the support of her family and has learned a great deal about how to be a faith-filled woman from her mother and grandmother.

“My mom had just spent however much money putting me through college, and then to have me be like, ‘Hey, Mom, I’m going to volunteer for a year, I hope that’s okay!’” Rohrbaugh said, laughing. “My mom has definitely supported me.”

Sarah King knew she wanted to do a year of service working at a women’s shelter after graduating from college, but the plans for her original program fell through. She wasn’t sure what to do next and was looking around on a volunteering opportunities web site when she saw an immediate opening through FrancisCorps to work at the Dorothy Day House.

King came to FrancisCorps from St. Mary’s, a women’s college in Notre Dame, In. She said she hadn’t ever really put much thought into the role of women in the church until she went to college. She’s now considering going on to earn a graduate degree in theology, focusing on gender studies.

She said her experiences in FrancisCorps have helped her better appreciate the benefits of her own life.

“It’s been incredibly eye-opening for me and I think for all of us. Every day has its challenges just because it’s a world that I haven’t experienced before. It’s really helped me realize that where I was born was such a blessing, and not everyone is as lucky,” she said, “but I’ve been able to see Christ in places that I might not have before.“

She said she works with women who have been beaten down in life, both mentally and physically. “A lot of my workday, what I try to do is build up their strength in themselves to be like the people that I aspire to be like — like Dorothy Day,” King said.

She said the founder of the Catholic Worker movement has been a real inspiration. “The more I learn about her, the more I realize that she’s definitely a woman I aspire to be like. She really broke down boundaries, and her strength of character is something I look to in my own life,” she said.

Cathleen Zupan first heard about FrancisCorps through a family friend who is a benefactor of the organization. She now volunteers working with children at the Northside CYO. Many of the children there are from refugee and low-income families.

“It’s definitely very challenging because the kids’ background is very different from what we grew up with,” she said. Her prior experience working with children involved babysitting some well-behaved cousins, but now she’s working with children who may not have access to discipline and manners.

“I’ve been called a lot of bad words,” Zupan said.

But she tries to help reinforce more positive behavior with the children, and she looks for inspiration to the youth ministers at her home parish of St. James in Cazenovia.

Zupan said she thinks women are moving into a stronger role in the church, and that’s something she finds encouraging. “From talking to the sisters who live by us and their stories of the past and how they can really do more in the church and they have more of a leadership role, I think it’s a great thing,” she said.

Kathy Shuler said she had considered joining the Peace Corps, but opted instead for the smaller community setting of FrancisCorps. “I first heard about FrancisCorps when my brother did it, and I’d always kept it in the back of my mind as something that maybe I wanted to do,” she said.

Shuler volunteers at Franciscan Northside Ministries and works at the Assumption food pantry.

“I’ve seen a lot of different family backgrounds in my work and I’ve been exposed to different people,” Shuler said. But rather than being overwhelmed by the differences between herself and those she serves, she said she might be called to further service.

“I absolutely love my job,” Shuler said. “I didn’t realize how much passion about it I would discover.” Now she’s thinking about pursuing a graduate degree in social work.

“When I told [my mother] about going to school for social work she kind of laughed because I had said I never wanted to go back to school again — ever,” she said.

She said her mother has been supportive of her choices so far, and now those choices have brought her new sources of inspiration.

“The women I look up to are my roommates,” Shuler said. “Just hearing about how much effort and work that they put into their jobs is really motivating and inspiring to me.”