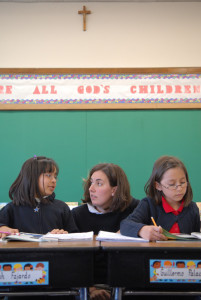 A Kaiser Family Foundation study published last month reported that children ages eight to 18 spend over seven and a half hours every day plugged into “entertainment media.”

This means more than 53 hours out of each week are spent using ipods, video games or the Internet.

The findings brought on an avalanche of pundits and columnists lamenting the image of glassy-eyed children staring into computer screens while their childhood whizzes by.

But for some, like the Catholic Community at Ithaca College, this is an opportunity to encourage young people to explore their faith.

Tom Eschen, Jr., a parishioner of St. James Church in Cazenovia and a junior at Ithaca College, has been blogging about the faith-filled life of a college student since October.

“Blog” is short for “web log,” and it is a consistently updated, chronological online account of a person’s thoughts, opinions or some aspect of his or her life.

With the catchy title “Session with Eschen,” the blog takes an informal, chatty tone and incorporates mentions of midterms and football practice with Gospel readings and Sunday homilies.

Just before Thanksgiving, Eschen considered the passage in Luke 17:11-19. He wrote, “In this passage, the nine lepers who did not come back did what many of us do after our problems are solved, move on to the next worry in our lives. It is like when you get a test back you had been worrying about: you do better than you thought, but instead of taking a step back and thanking God for that gift of knowledge, you start thinking about an argument you had with a friend or the fact you might not be happy with your girlfriend or boyfriend at the time. All Jesus wanted was for those nine lepers to take a step back and thank God for His good works. He wants that for us, too.”

An example of one of Eschen’s blogs can be found on page 6. The “Session with Eschen” blog can be found at
www.ithacacatholics.blogspot.com.

The idea for the blog came from the college chaplain, Father Carsten Martensen, SJ.

“This past year we had started talking about ways to better share the Good News,” Father Martensen said. He said he enjoyed Eschen’s writing for the college newspaper, so he thought a blog might be a good idea.

Father Martensen said that he thinks it’s important to explore all avenues in reaching out to young people, whether through blogs, the social networking site Facebook or the instant messaging system Twitter. “We’re even talking of maybe doing something for Youtube,” Father Martensen said. Youtube is a popular video sharing web site.

“My hope is that it touches students’ minds and hearts and hopefully encourages them to get more involved in coming to church and deepening their spirituality,” Father Martensen said.

He said he has seen Eschen live his faith from the first time he appeared on campus. Eschen’s father contacted Father Martensen during the summer before Eschen’s freshman year. “His father contacted me because he wanted to know when Mass was here at Muller Chapel because Tom very much wanted to participate,” he said.

When Father Martensen explained that there were no Masses celebrated during the summer on campus, Eschen travelled into town to attend Masses at Immaculate Conception Church.

“When we started Masses up here in the fall semester, he was always here. And when he wasn’t, I’d notice and say something to him, and he’d almost always tell me, ‘Well, I went to be with my family that weekend and we went to Mass in my home parish. But that’s good, Father, keep on me and make sure I’m showing up,’” Father Martensen said.

It’s this faith and commitment that Father Martensen said he thinks is an important example for other young people.

“It’s important that they see that to be a religious person doesn’t mean that you have to be on your knees in the chapel all day long,” Father Martensen said.

Eschen said that when Father Martensen approached him to ask him if he might be interested in writing for a blog, he didn’t know what the blog would be about. But he began writing of his own life and experiences, and the ideas just came from there.

“I try to kind of gear it a little more to college kids,” Eschen said. “I’m always looking for stuff that would be good to be in the blog. It kind of just builds over the week but there’s not much storyboarding or anything like that.”

One favorite theme is the connection between faith and football. Eschen is a cornerback on the Ithaca College team.

“I think that they’re a lot alike,” he said. It’s about the struggle to continue and the need for perseverance despite sometimes overwhelming odds, he said. “It’s something to stay focused on. You’ve got to have some stuff like that in your life.”

Eschen said he spends about an hour and a half each week writing the blog. But of course, the demands of college life can sometimes take precedence over his blog deadline.

The entry for Tuesday, Dec. 8 is one example. “Busy day … two tests this afternoon. So I will be back with a new post tomorrow, see you then,” Eschen wrote.

Lee Imbriano, the lay campus minister, even found himself in one of Eschen’s earliest blogs. Imbriano and his fiancee had given a talk about relationships and expectations on the campus. “On the one hand it was flattering that Tom had listened to it and was able to write so well about it,” Imbriano said, “It’s humbling also to have someone listen to what you’re saying and really apply it to their own life.”

Imbriano said this ability to synthesize faith and everyday life is what’s so appealing about Eschen’s blog. “What we’re seeing with college students is that there is in many of them an openness to learning more about faith,” Imbriano said. But he said he thinks it’s important to reciprocate this openness. One way of doing this is by approaching students through electronic media that are familiar to them.

Imbriano said it’s important to adapt faith for college students without changing the truth. “It’s about making it real for them,” he said.

“It is a lot of effort to always stay on these different media, and hopefully whatever media they’re going to use, we’re going to be on it, too,” Imbriano said.

But the commitment of attending weekly Mass is still a deal-breaker for many college students. “For a lot of these students it’s [like a] cafeteria; they can go to this meeting or that meeting. In understanding this generation of 18 to 20 year-olds, most things in their lives don’t involve that kind of commitment. So what we’re trying to do is offer helpful, meaningful, fulfilling ways to come back to it.”

For his part, Eschen said his parents played the key role in keeping him involved in parish life in Cazenovia. “We went to church every week and I was involved in the youth troupe at St. James,” he said. “They’ve always focused me and my sisters on praying and focusing on God. I love them for that. It really has helped me keep a level head.”

He said he thinks it’s vital that the Church make use of the Internet as it moves into the 21st century. It’s important to maintain the traditional aspects of faith, he said, but the Internet is a tool to help people learn more about their faith.

At the end of the day, faith is what Eschen’s blog is all about.

“You’re believing something that you’ve never really seen. It’s something that a lot of people really don’t believe. There’s a lot of doubt out there, but to have a strong faith is so important,” he
said. “It’s unlike, really, anything else.”