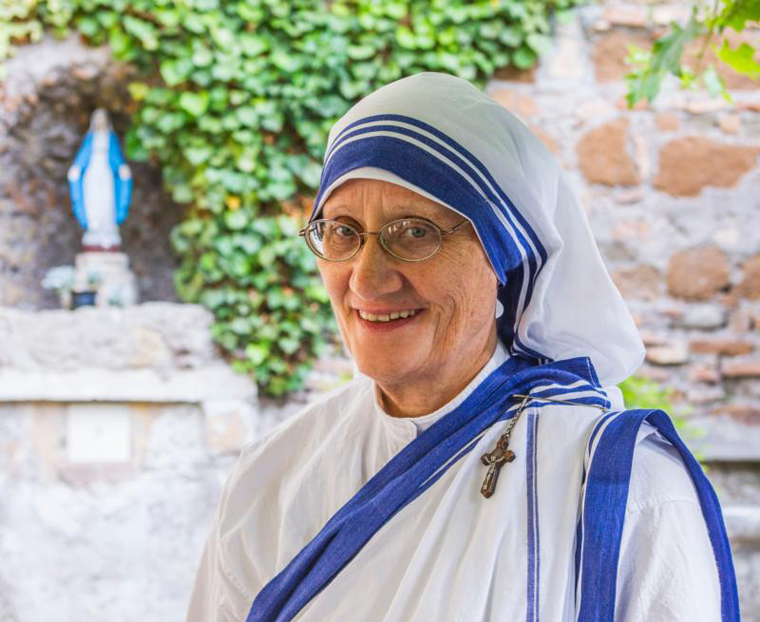 ROME (CNS) — Blessed Teresa of Kolkata was a woman who truly felt wed to Jesus, and the freedom she experienced in loving him led her to radical poverty, a courageous outreach, and an immense love for the poor, said the superior general of the order Mother Teresa founded.

“She was very happy to be a woman and to be a mother to so many souls,” Missionaries of Charity Sister Mary Prema Pierick told Catholic News Service.

“Her freedom of loving opened the doors of hearts and avenues of service, which maybe were not so common, especially in sharing the radical poverty of the poor,” said the German-born sister, who was elected superior general in 2009.

Mother Teresa, who will be canonized Sept. 4, began her order in the 1940s, walking into the slums of Kolkata, “having no convent walls to protect her,” Sister Prema said. “But it was love for Jesus and love and compassion for the suffering of the poor that brought her to do what she did.”

At the main Missionaries of Charity house in Rome — a whitewashed oasis above the roar of traffic around the Circus Maximus and near the crush of tourists at the Colosseum — Sister Prema spoke of how natural it was that Mother Teresa would be declared a saint during the Year of Mercy.

Mother Teresa is “an icon of mercy,” she said. “Even people who would have no faith would see the compassion and the mercy which Mother spread around her. She would not leave a suffering person without giving attention to them. On the contrary, she would go out to search for them and try to bring them to the realization that they are loved and they are appreciated.”

Like millions of people around the world, Sister Prema believed Mother Teresa was “a living saint.” She was beatified in 2003 — six years after she died. The time it took for her sainthood cause to make its way through the exacting Vatican process has been “years of going deeper into understanding who she is,” her successor said.

As it turned out, the years were especially important in coming to understand Mother Teresa’s spiritual thirst and what she described as “the darkness” of feeling unloved by God. Sister Prema, who first met Mother Teresa in 1980, said the founder’s spiritual pain was something she kept well-hidden from all except her spiritual directors.

“In all things, Mother did not draw attention to herself but gave herself completely to others, forgetting about her own pain,” Sister Prema said.

Her continuing prayer and work, even with the experience of God being so far away, “speaks about her faith, her faithfulness to the commitment she had taken, and to the person to whom she was wed: Jesus.”

The “darkness” became part of Mother Teresa’s ministry, the grace that gave it power.

“It was part of her mission to the poorest of the poor, especially sinners who experienced their unwantedness and their rejection. Sharing their experience of darkness and of being away from God made her an instrument of grace for them,” Sister Prema said. “And she had great compassion for those who did not know God and did not experience the love of God for them.”

Speaking in the sisters’ garden, with blue-trimmed white saris drying on a clothes line, Sister Prema said Mother Teresa’s persistence in prayer and works of mercy, even when she felt God was far from her, is a lesson for all believers.

“Prayer is something we want to be faithful to rather than to be successful at,” she said.

And while the phrase “corporal and spiritual works of mercy” may sound old-fashioned to some people, Mother Teresa demonstrated the enduring power of those expressions of love, Sister Prema said. “However you phrase it, it is always modern because you are imitating Jesus and his compassion.”

The vast majority of people Mother Teresa tended to, caressed, and accompanied were not Christian, Sister Prema said, but for her, they were Christ in disguise.

Called, like all Christians, to spread the Gospel, Mother Teresa “helped people to find Jesus in their own hearts and experience that love that God has for them just by the experience of her motherly attention and intense interest in their personal lives.”

“She had a great desire that all souls would get to know and love Jesus,” Sister Prema said. But at the same time, “she knew that conversion is the work of God. The acts of charity and mercy, which she performed, came because of love for Jesus and for others.”

“God has to do the work of conversion,” she said. “It’s not a human work to convince a person to believe what I believe. It’s a grace which a soul receives and for which we can pray.”