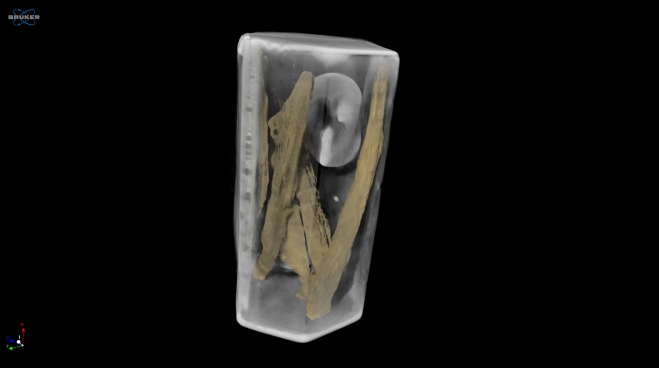 JAMESTOWN, Va. (CNS) — The identities of four men discovered almost two years ago at the site of Jamestown’s historic 1608 church have been identified and one of the men had been buried with a silver box that is “likely a Catholic reliquary.”
The Smithsonian Museum of Natural History and the Jamestown Rediscovery Foundation at Historic Jamestowne announced the men’s identities July 28.

They are the Rev. Robert Hunt, Sir Ferdinando Wainman, Capt. William West and Capt. Gabriel Archer, on top of whose coffin was resting the silver box.

Their remains were found beneath the chancel area of what was an Anglican church at the front of a structure where a communion table would have been located and where only elite community members would have been buried.

“Religion played a prominent role at Jamestown, and many efforts were made to convert the neighboring Powhatan tribes to the Anglican Church,” a news release said. “The presence of the reliquary, however, suggests that at least one of the colonists retained his Catholic faith, perhaps in secret.”

High-resolution CT scans of the sealed box, which has what looks like the letter “M” engraved on the lid, show that inside are seven fragments of bone and two pieces of a lead ampulla, a container use to hold holy water.

In 2010, archaeologists discovered post holes that outlined the what had been the church — which is where Pocohantas married John Rolfe, one of the English settlers.

Three years later, the graves of the four men were discovered.

Archer died in late 1609 or early 1610 at age 34. His death came during the “starving time,” a period of six months during which “approximately 250 settlers perished at Jamestown from disease, starvation and Indian attacks,” the release said.

According to a Washington Post story, “Archer was not known to be Catholic. But his parents in England had been ‘recusants,’ Catholics who refused to attend the Protestant Anglican Church, as required by law after the Reformation.”

The news release and the Post report said that Archer may have retained his Catholic faith in secret.

Since 1996, Smithsonian forensic anthropologist Douglas Owsley and his team have worked with archaeologists from Jamestown Rediscovery “examining skeletal remains in an effort to better understand the lives of the first colonists in the Chesapeake.”

“The skeletons of these men help fill in the stories of their lives and contribute to existing knowledge about the early years at Jamestown,” Owsley said in a statement.

The scientists will continue to study the men’s remains, which will be kept in a vault, and there are plans to put the silver box on display, but it will not be opened.