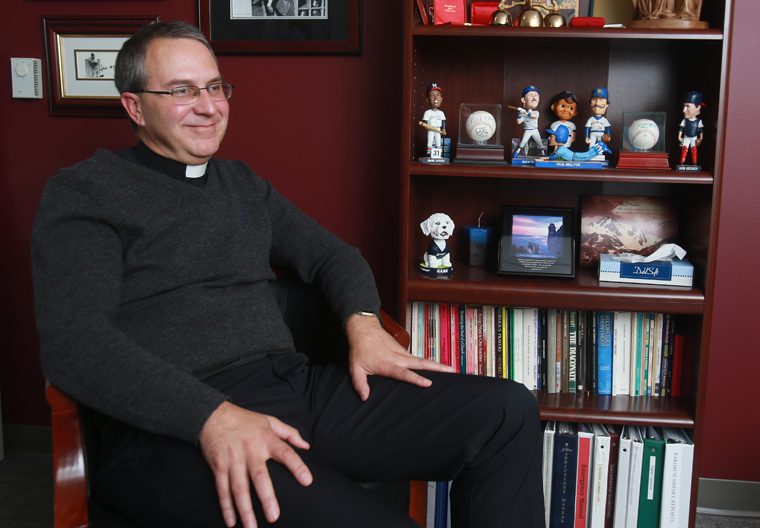 MILWAUKEE (CNS) — Champagne corks popped in the visiting clubhouse Oct. 7 as the Milwaukee Brewers celebrated their sweep of the Colorado Rockies, advancing to the National League Championship Series.

Back home in Wisconsin, an extended member of the Brewers’ family was celebrating, too. Father Jerry Herda was popping a champagne cork in his backyard after watching the game on television with his family.

Father Herda, the Milwaukee Archdiocese’s vicar for ordained and lay ecclesial ministry, has been a lifelong Brewers fan, but he also has a special connection to the team, having served as its Catholic chaplain for 12 seasons.

“The family was all together and we were screaming and yelling and even broke open a bottle of champagne in the backyard,” admitted Father Herda, following the Brewers’ 6-0 shutout of the Rockies to win the National League Division Series.

Father Herda’s role with the Brewers began shortly after pitcher Jeff Suppan signed with the team in 2006.

A devout Catholic, Suppan asked if a Mass could be celebrated at Miller Park for players and staff prior to weekend games. As Father Herda explained, Suppan’s previous team, the St. Louis Cardinals, had arranged for a Mass at the ballpark on weekends and Suppan hoped that could be replicated in Milwaukee.

Then-Archbishop Timothy M. Dolan, now New York’s cardinal-archbishop, appointed Father Herda to the role and, for the last 12 seasons, Father Herda has celebrated Mass in the press room of Miller Park prior to games Saturday afternoon or Sunday morning.

“It’s open to any employee of Miller Park and there are a variety of people who come,” said Father Herda, noting that players, coaches, ushers, security personnel and members of visiting teams are among his “parishioners” at the ballpark Masses.

The concept of ballpark Masses has been promoted by a national organization to which Father Herda belongs, Catholic Athletes for Christ, and to date, he said Masses are celebrated in 28 of 30 major league ballparks.

For Father Herda, as a baseball fan, the opportunity was a dream come true.

“I’ve been a lifelong fan. I grew up in this area and have always been a fan, so I was excited at the opportunity to be this close to the inner workings of a baseball team. It was nerve-wracking and fun all at the same time,” he told The Compass, newspaper of the neighboring Diocese of Green Bay.

Father Herda estimated that he celebrates about 10 ballpark Masses a year and attendance at each Mass averages about 25 to 30 people.

“For some of these people, it’s the only opportunity to go to Mass. The security guards, for example, have to be there so early on Saturday and then have to be back Sunday, so there’s no other opportunity for Mass,” he explained.

Players and coaches are among the attendees, he said, noting that this season, he had a repeat worshipper from the Pittsburgh Pirates, since the team was in town for more than one weekend.

“It’s been my experience over the years that some guys are very faith-filled and really take their faith seriously, trying to live out their faith by attending Mass and wanting to participate in the sacraments. It’s nice to see that happening and I wish it would expand more,” said Father Herda.

He recalled that Suppan, who was released by the Brewers in 2010 and retired from baseball in 2014, was not only a regular attendee, but an evangelist of sorts, as he encouraged teammates to attend. According to Father Herda, Suppan’s devotion to the Eucharist was evident in his humorous comment about a similar nondenominational service also held at the ballpark on weekends.

“He’d say to (teammates), ‘Why go for the appetizer when you can come for the real meal?'” Father Herda relayed with a smile.

Because of time constraints, Father Herda said he has to limit the Masses to 30 minutes, but even in the shortened time frame, he makes sure to leave the worshippers with a message they can carry with them.

While his role primarily involves celebrating Mass at the ballpark, Father Herda said he has performed a few baptisms, heard confessions and recently celebrated a funeral Mass for a longtime usher at the request of his family.

Father Herda’s connection to the Brewers has left him with a lifetime of memories and shelves and walls filled with memorabilia.

In his office, for example, a framed photo of himself with Pope Benedict XVI hangs next to his prized, framed 2011 cover of Sports Illustrated featuring a story on the National League Central Division champion Brewers and signed by Prince Fielder, Ryan Braun and T Plush (Nyjer Morgan).

Brewers bobbleheads and balls signed by Rollie Fingers and Henry Aaron grace his shelves, along with a wooden carving of the Holy Family, altar bells and an ornate golden cross.

With the Brewers poised to make a run for the World Series championship, Father Herda is grateful for the opportunity he’s had to impact athletes’ faith lives.

“It gives me some joy in the sense there is a connection to something I love. I love being a priest and I love sports, so it is nice to connect them together,” he said.