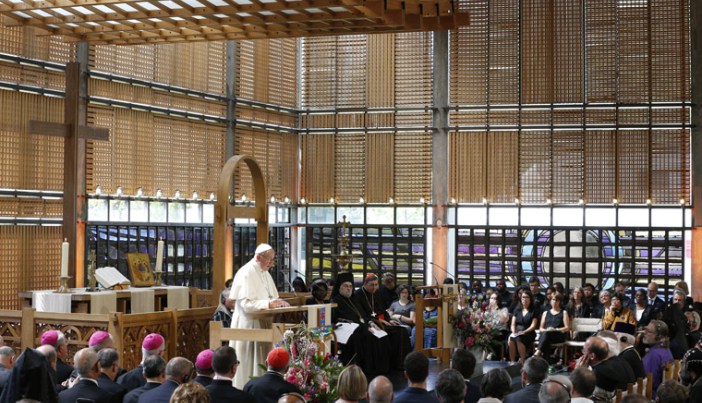 GENEVA (CNS) — Not only God, but today’s broken, divided world is begging for unity among Christians, Pope Francis said on an ecumenical pilgrimage to Geneva.

“Our differences must not be excuses,” he said, because as Christ’s disciples, Christians can still pray together, evangelize and serve others.

On his 23rd apostolic journey abroad June 21, the pope spent several hours with Christian leaders at the headquarters of the World Council of Churches, a fellowship of 350 ecclesial communities, including many Orthodox churches. The pope came to help celebrate the 70th anniversary of the founding of what is the largest and broadest ecumenical fellowship in the world.

Speaking to reporters aboard the papal plane from Rome, the pope said, “This is a trip toward unity,” representing the “desire for unity.”

He was greeted on the tarmac by dignitaries and two children in traditional dress; two former members of the Swiss Guard stood by the red carpet in the corps’ full colorful uniform, which only happens on papal trips to Switzerland. Active guard members traveling with the pope are always in plainclothes.

Accompanied by the leadership of the WCC, the pope attended an ecumenical prayer service, marked by songs from the Protestant traditions and the Catholic Church’s theme song for the Jubilee of Mercy. There was a common witness of faith in reciting the Nicene Creed and representatives from the Catholic Church and other Christian communities alternated readings, including a prayer of repentance, which asked God’s forgiveness for their disunity and failure to serve God and all his children.

In his speech, the pope said, “Our lack of unity” is not only contrary to God’s will, it is “also a scandal to the world.”
“The Lord asks us for unity; our world, torn by all-too-many divisions that affect the most vulnerable, begs for unity.”

Pope Francis, the third pope to visit the WCC, said he wanted to come as “a pilgrim in quest of unity and peace.” He thanked God for having found “brothers and sisters already making this same journey.”

The journey requires constant conversion, he said, and a renewed way of thinking that rejects worldliness and seeks to live “in the Spirit, with one’s mind bent on serving others and a heart growing in forgiveness.”

“Divisions between Christians have often arisen because at their root,” he said, “a worldly mindset has seeped in.”
“First self-concern took priority over concern for Christ,” he said, and from there, it was easy for the devil to move in, “separating us.”

Following Christ entails loss, he warned, because “it does not adequately protect the interests of individual communities, often closely linked to ethnic identity or split along party lines, whether ‘conservative’ or ‘progressive.'”

Christians must belong to the Lord above and before they identify with anything else, “right or left; to choose in the name of the Gospel, our brother and sister over ourselves,” he said.

After lunch at the WCC ecumenical academic institute at Bossey, outside of Geneva, the pope paid homage to the courageous men and women before them who “changed the course of history” with a love for Christ that overcame the mutual mistrust and suspicion, which all “contributed to the infernal spiral of continued fragmentation.”

Speaking at an ecumenical encounter with the central leadership committee of the WCC, the pope praised their work and commitment to unity; however, he expressed his concern that the Christian sense of mission was no longer “as closely intertwined” with their ecumenical pursuits.

The missionary mandate is more than just service and promoting human development, he said; it includes “the preaching of the Gospel to the ends of the earth” and recognizing that the church grows “by attraction” to Christ himself, not human ideas, strategies and programs.

“Faith in Jesus Christ is not the fruit of consensus, nor can the people of God be reduced to a nongovernmental organization,” he said.

Christians must never “debase this treasure” of knowing and praising God and his glory, by turning it into “a purely immanent humanism.”

Also “troubling,” he said, “is the conviction on the part of some, who consider their own blessings clear signs of God’s predilection rather than a summons to responsible service” to the whole human family and the environment.

The pope said he wanted to “take part personally in the celebrations marking the anniversary of the World Council” of Churches as well as reaffirm the commitment of the Catholic Church to the cause of ecumenism and encourage cooperation.

He said it was critical that Christians come together for “the credibility of the Gospel,” which is “put to the test by the way Christians respond” to those suffering in the world today.

“It is problematic when Christians appear indifferent toward those in need,” he said, urging everyone to avoid partisan interests or overemphasizing “certain cultural paradigms.” Instead, he urged them to help people become aware of events and situations that affect a large number of people, “but seldom make it to the front page.”