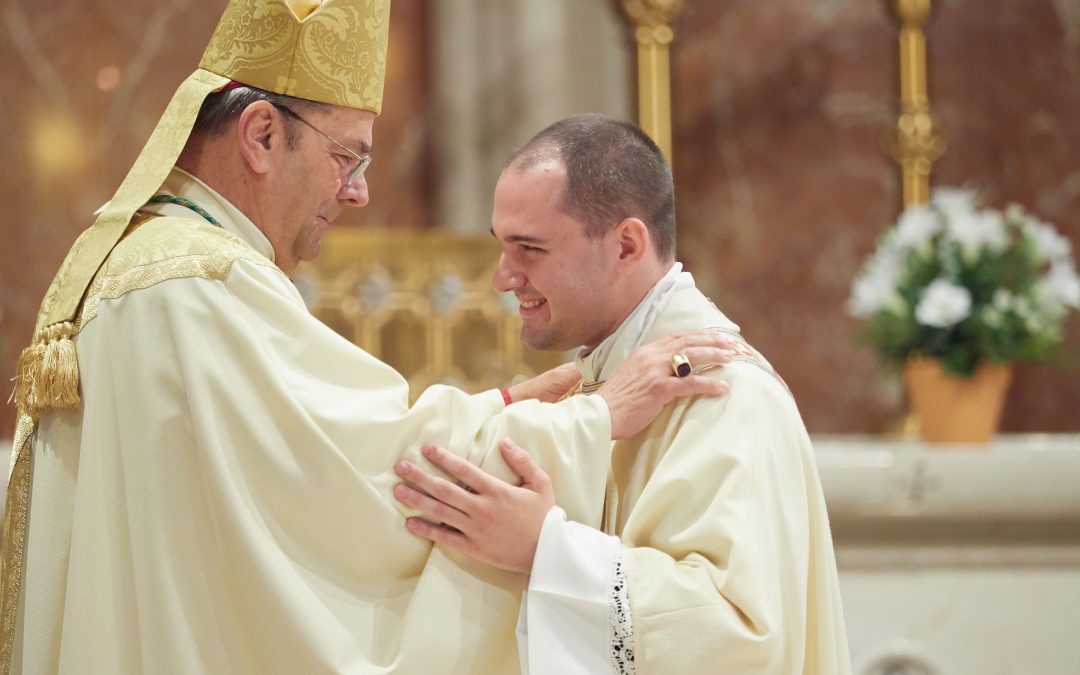 From the moment he entered the Cathedral of the Immaculate Conception as a deacon to the time he later spent offering his first blessings as a priest, Matt Rawson never stopped smiling.

Father Matthew Rawson was ordained the newest priest of the Diocese of Syracuse June 2 in a Mass celebrated by Bishop Robert J. Cunningham. The bishop was joined at the Cathedral by Auxiliary Bishop Thomas J. Costello, numerous clergy and religious, seminarians, and Father Rawson’s loved ones and supporters.

After years of discernment and formation, the new Father Rawson declared the ordination “amazing” and recalled the welcoming Sign of Peace from the bishop and his new brother priests as one of the most powerful moments of the rite. He then quickly turned his attention and beaming smile back to the long line of well-wishers awaiting his blessing in the Cathedral’s prayer park.

Read more: As ordination approaches, Matt Rawson reflects on his journey to the priesthood

The celebration began with readings proclaimed by Louise Prince and John Trendowski, parishioners of Father Rawson’s home parish, Our Lady of Hope (formed in October through the joining of Our Lady of Lourdes and St. James Parishes) in Syracuse. The Gospel was proclaimed by Deacon Nate Brooks, who is anticipated to be ordained to the priesthood next year.

During the Mass, Bishop Cunningham offered a homily crafted specifically for the ordinand, reminding him that every priest is called to follow the pattern of Christ’s priestly offering.

“The Gospel gave us one of the most comforting images of God’s care for us: the good shepherd,” the bishop said. “The good shepherd knows his sheep by name, and they know him. He is attentive to them, protects them, and when necessary, lays down his life for them.

“Matthew, God’s word helps us to understand what is happening today: You are called by God to serve his people by the faithful proclamation of his word and the distribution of his mercy through the sacraments, especially the Eucharist and Reconciliation,” he said.

Offering encouragement to overcome any moments of trial, Bishop Cunningham said in closing, “My dear brother, may you live in the hope that Jesus is ever at your side. Walk with him in faith and through your ministry show his love to all entrusted to your care.”

Following the homily, Rawson declared himself willing to be ordained. Kneeling and placing his hands inside the bishop’s, he promised obedience to the bishop and his successors.

Rawson then prostrated himself in the sanctuary, signifying his submission to God’s will, as the assembly prayed the Litany of Supplication.

Drawing from the Church’s ancient tradition, Bishop Cunningham placed his hands on Rawson’s head in silent prayer, a sign of consecration to the Order of the Priesthood. The bishop then offered the Prayer of Ordination, completing the Sacrament of Ordination.

Father Rawson was then vested in the stole and chasuble of a priest by Father Dan O’Hara, the former pastor of St. James and the current pastor of Immaculate Heart of Mary and St. Joseph the Worker Parishes in Liverpool.

Father Rawson chose Father O’Hara to vest him because “when I decided this is what I wanted to do, he was there to guide me,” he told the Sun the week before his ordination. Father O’Hara was a mentor to Rawson while in seminary and before, and “to have him vest me — truly, it’s a beautiful thing,” he said.

Bishop Cunningham anointed the new priest’s hands with Sacred Chrism and presented him with the gifts of bread and wine. He then concluded the rite by offering the Sign of Peace, with all of Father Rawson’s new brother priests doing the same.

After Father Rawson assisted in his first celebration of the Eucharist as a priest, Bishop Cunningham announced the new priest’s first assignment: Beginning July 1, he will serve as parochial vicar of Holy Cross Church in DeWitt.

The parish’s pastor, Father John Kurgan, said he looked forward to welcoming Father Rawson to the parish and getting him “on board” as part of the faith community.

Father Chris Ballard, pastor of Our Lady of Hope, said the parish community was proud and excited to see one of their own ordained a priest, and that they would continue to work and pray hard to support vocations to the priesthood. “It’ll be a great celebration this weekend in the Valley,” he said.

And Deacon Brooks, who spent several years in seminary with Father Rawson, said he knows his former classmate will be a great priest. “I think he’s going to be compassionate; he’s really going to reach out to a lot of people. He’s a very kind person who is approachable and sees the good in people, and really wants to help them.”

See photos of ordination day below. All photos for the Catholic Sun by Chuck Wainwright.

Watch the entire celebration live-streamed via Syracuse Catholic Television.
Is God calling you or someone you know? Visit vocations-syracuse.org or contact Father Joe O’Connor in the Office of Vocation Promotion at joconnor@syrdio.org or (315) 470-1468.