Servant of God and servant of His people 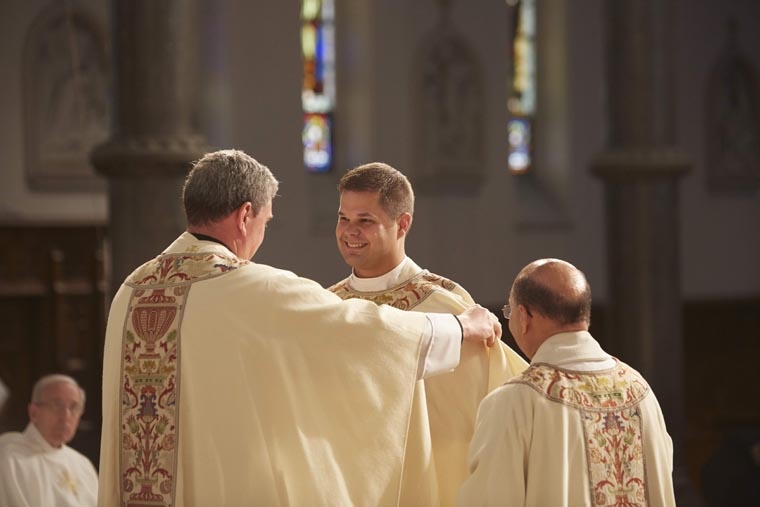 Father Zachary Miller ordained a priest of the Diocese of Syracuse

Not so long ago, it seemed Zach Miller’s calling might be law enforcement. A criminal justice student, Miller — a former Boy Scout with experience in the Army National Guard and on the Vestal Volunteer Emergency Squad — was considering the

possibility of careers with the New York State Police or the FBI. But his call to a life of service ultimately took another form.
Father Zachary Miller was ordained the newest priest of the Diocese of Syracuse June 6, in a ceremony celebrated by Bishop Robert J. Cunningham at the Cathedral of the Immaculate Conception in Syracuse.

Though his path to the priesthood may seem winding, Father Miller said that, through discernment, he came to see “everything in my life has been very much service-oriented, always kind of focused on serving people. Now [through ordination], it’s serving the people of God in a very particular way.”

Born in Pennsylvania and raised in Vestal, Father Miller is a lifelong member of Our Lady of Sorrows Parish there. He is the son of Annette and the late Thomas Miller. He has two older siblings, Joshua and Leah.

After graduating from Vestal High School in 2003, Father Miller enlisted in the Army. He spent six years in the National Guard, serving in both active and reserve status. He worked for the Veterans Administration, offering education counseling to veterans, while also studying for his associate’s degree in criminal justice at SUNY Broome County Community College and serving on the Emergency Squad. He later moved to Buffalo, where he earned his bachelor’s degree from SUNY Buffalo. His initial discernment to the priesthood also began there.

“Okay, Lord, this is between you and me and I’m placing my life into your hands,” Father Miller recalled praying. “If it’s meant to be, I will follow, I will pray, I will seek out your calling in my own life, but it’s something that we have to do together.”

Father Miller also spoke to a close friend, Father Matthew Brown, currently in residence at Our Lady of Sorrows. “He advised me to slow down, take a more prayerful approach to it, and to let the Spirit work within my life,” he said.

After a year, the pull was still there, he said. Father Miller applied to and was accepted into formation for the diocese, much to the “shock and awe” and great support of his family and friends, he said, laughing.

Father Miller began his studies at St. Mary’s Seminary and University in 2008. It was hard to go back to the classroom, Father Miller said, but he found the experience — academically and personally — enriching. Not many people “can say they’re given a chance to explore God’s will within their own life and to make a firm decision in the path they want to do and… God wants them to do,” he said.

Father Miller spent his pastoral year at St. John the Evangelist in New Hartford, learning from pastor Father Joseph Zareski and the people of the parish. He also taught religion to eighth through twelfth graders at Notre Dame Jr./Sr. High School in Utica. “That was interesting because I had to take my own education from the seminary and put it into practice,” he said, creating lesson plans that were fun but also informative and open to the serious questions the students wanted to ask.

His varied experiences will help him in a particular way in his new ministry as a priest, Father Miller said: In serving God’s people in their times of need, joy, sorrow and happiness. “It’s going out and meeting people where they’re at and helping them along the way on this journey of faith that all of us are traveling,” he said.

The choir from Our Lady of Sorrows joined with the diocese’s Festival Choir to fill the Cathedral with song. Joshua and Leah Miller, Father Miller’s siblings, offered the readings. Deacon Ken Kirkman, ordained to the transitional diaconate May 30, proclaimed the Gospel.

Father Thomas Servatius, diocesan director of seminarian formation, called Father Miller from the pew where he sat with his family. Father Miller then stood before Bishop Cunningham, who accepted and elected him to the office of priesthood to loud applause from the congregation.

Bishop Cunningham delivered his homily directly to Father Miller, who sat before him.
“…Our brother Zachary wishes to consecrate himself to God and His people for service as a priest. He desires to assist his bishop in his mission of making holy and governing the flock entrusted to his care. Putting aside personal preferences and desire for material gain, he wishes to show his love by laying down his life in service to God’s people. Zachary echoes the words of Peter the apostle proclaimed in today’s Gospel: ‘Lord, you know everything; you know that I love you.’ Truly it is love of the Lord that prompts Zach to take this step. As he moves forward he will reflect the glory of God, acting in the person of Christ.” (Read Bishop Cunningham’s homily in full on page 3 of this issue.)

Father Miller then declared himself willing to be ordained and, placing his hands in Bishop Cunningham’s, vowed obedience to the bishop and the Church. He then prostrated himself in the sanctuary as those gathered prayed the Litany of Supplication.

Bishop Cunningham then placed his hands on Father Miller’s head in silent prayer, a sign of consecration to the priesthood; each priest in the sanctuary then did the same. Bishop Cunningham completed the Sacrament of Ordination with the Prayer of Consecration.

Bishop Cunningham anointed Father Miller’s hands with Sacred Chrism, a sign that he will be a servant of the people. He then received the gifts from Father Miller’s family and presented the paten, host and chalice to Father Miller “so that he may continue to imitate the mystery of Christ by offering the Eucharist for God’s holy people.”

The rite concluded with the Sign of Peace, first offered to Father Miller by Bishop Cunningham.

Before his ordination, Father Miller said he was looking forward to getting to know the people at his newly assigned parish, wherever it might be.

“I’m going into this first assignment very much as I went into my pastoral year, in that I am the priest, I am the clergy, but we have to listen to what the people are telling us, we have to seek out their advice,” he said. He will also “trust the people of God to help form me into a new priest that can be caring and compassionate,” he said.