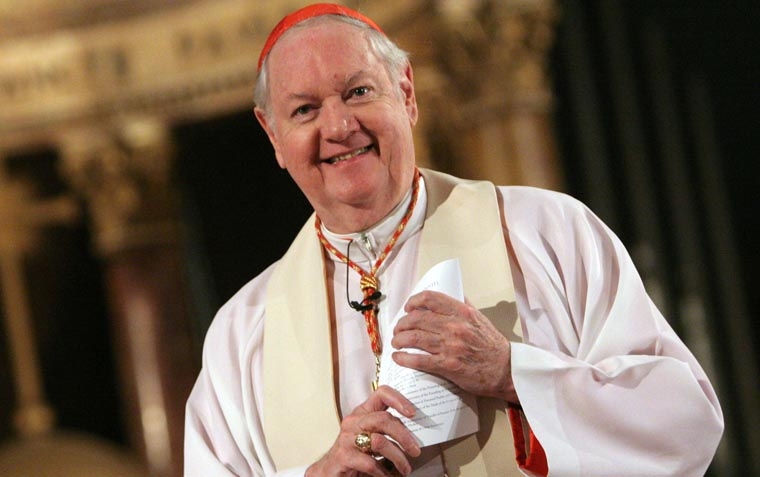 NEW YORK (CNS) — Cardinal Edward M. Egan, who retired as archbishop of New York in 2009, died March 5. The cause of death was cardiac arrest. He was 82.

After collapsing at his residence that afternoon, he was taken to NYU Langone Medical Center, where doctors pronounced him dead at
2:20 p.m.

A funeral Mass for Cardinal Egan was to be celebrated the afternoon of March 10 at St. Patrick’s Cathedral.

Cardinal Timothy M. Dolan of New York told Catholics of the archdiocese he was saddened to tell them “our beloved” Cardinal Egan “has gone home to the Lord.”

“Join me, please, in thanking God for his life, especially his generous and faithful priesthood. Pray as well that the powerful mercy of Jesus, in which our cardinal had such trust, has ushered him into heaven,” said Cardinal Dolan, who succeeded Cardinal Egan.

“My sympathy to his natural family, who will grieve for their uncle, and to you, his spiritual family here in the Archdiocese of New York,” he added.

Cardinal Dolan in his statement said that Cardinal Egan “had a peaceful death, passing away right after lunch today, with the prayers and sacraments of his loyal priest secretary, Father Douglas Crawford, in his residence at the Chapel of the Sacred Hearts of Jesus and Mary.”

He said the retired archbishop was rushed from the residence to the medical center, where he was pronounced dead.

Pope Francis offered his condolences in a telegram to Cardinal Dolan.

“I join you in commending the late cardinal’s noble soul to God, the father of mercies,” the pope said, “with gratitude for his years of episcopal ministry among Christ’s flock in Bridgeport [Connecticut] and New York, his distinguished service to the Apostolic See, and his expert contribution to the revision of the church’s law in the years following the Second Vatican Council.”

In the planning stages for Pope Benedict XVI’s 2008 visit, Cardinal Egan put a constant focus on the spiritual side of the visit, organizers said at the time. He wanted the visit to be spiritually enriching for as many people as possible, and not just Catholics.

During his tenure as head of the New York Archdiocese, Cardinal Egan also had to tackle a budget shortfall and changing demographics. That led to parish realignment decisions in 2007; 10 parishes closed, another 11 merged with other parishes, and five new parishes were established. A year earlier nine schools had to close.

A three-year process led to the New York parish realignment decisions and involved a lot of listening and learning, the cardinal said at the time.

“The good news is that the process works,” he said. “Every decision was the result of an in-depth study of the needs of the faithful here in the Archdiocese of New York.”

In retirement, Cardinal Egan assisted in the works of the New York Archdiocese. For the Vatican, he served on the Council of Cardinals for the Study of the Organizational and Economic Problems of the Holy See for five years and participated in the 2005 conclave that elected Pope Benedict XVI.

With his death, the College of Cardinals now has 226 members, 125 of whom are under 80 and therefore eligible to vote in a conclave to elect a new pope.

Washington Cardinal Donald W. Wuerl said he and Cardinal Egan had been friends since 1963. He described Cardinal Egan as “a gifted scholar of canon law” who also “conveyed a deep pastoral concern for and dedication to the faithful he served.”

New York Mayor Bill de Blasio said in a statement that Cardinal Egan “spread love and knowledge, and brought comfort to countless New Yorkers and others across the country and the world who sought his guidance and counsel — especially in the aftermath of 9/11.”

After the terrorist attacks brought down the twin towers of the World Trade Center, then-Mayor Rudolph Giuliani called on the cardinal for his spiritual help. Cardinal Egan anointed the dead and distributed rosaries to workers. He also celebrated many funeral Masses for those who perished in the attacks or died trying to help people amid the rubble.

He said Cardinal Egan always “encouraged others to devote themselves to the greater good.”

“Cardinal Egan had a powerful and positive impact on our state and the world that will continue to be felt for years to come,” he said in a statement.

“He was a tireless defender of the poor and vulnerable, the unborn, the sick and the elderly,” Barnes said. “He had a particular devotion to Catholic education, calling it the church’s most important charitable ministry, and he raised untold millions to ensure its viability.”

Cardinal Egan also was a friend of the Jewish people in New York and during his earlier years in Chicago; the cities are home to two of the largest Jewish communities outside of Israel.

The archbishop of New York especially “plays a critical role in advancing Catholic-Jewish relations and Cardinal Egan is remembered as a friend who humbly built upon his Jewish relationships and lived out with the Jewish people the ‘Nostra Aetate’ ideal of the oneness of ‘the community of all peoples,’” said Rabbi Noam Marans, the American Jewish Committee’s director of interreligious and intergroup relations.

“Nostra Aetate” is the Second Vatican Council’s 1965 Declaration on the Relation of the Church to Non-Christian Religions.

He also was trained as a concert pianist, and in addition to English and Latin, he spoke French, Italian and Spanish.

He was ordained a priest of the Chicago Archdiocese Dec. 15, 1957, at the North American College, in a ceremony that also included J. Francis Stafford, another future cardinal. After further studies in Rome, he returned to Chicago in 1958 to serve as parochial vicar of Holy Name Cathedral Parish, assistant chancellor and secretary to Cardinal Albert G. Meyer.

Back in Rome for doctoral studies from 1960 to 1964, he also served as assistant vice rector of the North American College.