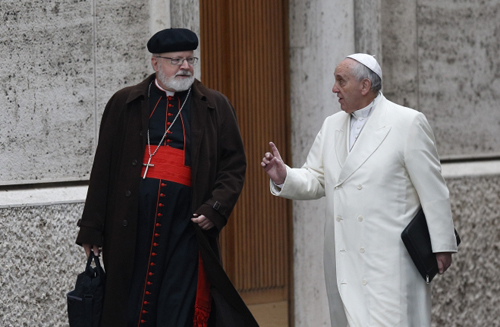 The officials also discuss what the organization charges for the body parts, which opponents of Planned Parenthood said violates federal law and the organization said are customary handling fees paid by research labs.

Cardinal O’Malley, in a July 29 statement, said Pope Francis calls abortion “the product of a ‘widespread mentality of profit, the throwaway culture, which has today enslaved the hearts and minds of so many.’”

He made the comments as chairman of the U.S. bishops’ Committee on Pro-Life Activities.

Archbishop Joseph E. Kurtz of Louisville, Kentucky, president of the U.S. Conference of Catholic Bishops, said in a radio interview that he was “appalled” by the videos but even more “appalled at the reality of abortion, the taking of the life itself.”

The prelates were referring to videos filmed undercover earlier this year and released in mid-July by a nonprofit California-based organization called the Center for Medical Progress.

In two videos, top Planned Parenthood physicians describe how abortions are carried out to best salvage fetal tissue and organs for researchers and described a range of prices paid for different body parts.

A third video was an interview with a technician talking about a company she works for harvesting and included graphic footage. As a fourth video was about to be released, until Los Angeles Superior Court July 28 issued an order blocking its release.

Cecile Richards, president of the Planned Parenthood Federation of America, in a statement said that “allegations that Planned Parenthood profits in any way from tissue donation is not true.” She later apologized for “the tone” the physicians used in describing abortion procedures and also argued the videos had been heavily edited to distort the truth.

The Center for Medical Progress has posted the first three videos on its website, www.centerformedicalprogress.org.

“The recent news stories concerning Planned Parenthood direct our attention to two larger issues involving many institutions in our society,” said Cardinal O’Malley. “The first is abortion itself: a direct attack on human life in its most vulnerable condition. The second is the now standard practice of obtaining fetal organs and tissues though abortion.”

“Both actions fail to respect the humanity and dignity of human life,” he said. “This fact should be the center of attention in the present public controversy.”

He also urged any woman for whom the Planned Parenthood news coverage has caused them to “experience revived trauma from their own involvement in abortion” to seek help from the Catholic Church’s post-abortion healing ministry, Project Rachel, www.projectrachel.com. (The Diocese of Syracuse offers Project Rachel Ministry locally.)

“Be assured that any and all persons will be welcomed with compassion and assistance” by the ministry, Cardinal O’Malley said.

Archbishop Kurtz discussed the videos in a call to the Catholic Channel’s “Seize the Day With Gus Lloyd” on SiriusXM July 23.

He said he “would be saddened” if the issue of abortion itself “somehow it lost its impact. That it became simply a debate over what’s legal and what’s illegal and I think the child in the womb then gets lost.”

“Our bishops’ conference has from the beginning opposed issues related to the funding, federal funding, of Planned Parenthood,” Archbishop Kurtz said, adding that just because “something may be legal doesn’t mean it’s right.”

The release of the videos, he added, is “an occasion for all of us to be renewed in our commitment to be pro-life and to promote a culture of life. … Our culture is becoming increasingly utilitarian. It’s very easy when you get into that mindset to see people as objects.”

The USCCB “is going to continue to promote a culture of life” and looking at what can be done legislatively to further that goal, he said.

On Capitol Hill, a number of Republicans in the House and Senate have called for an end to federal funding of Planned Parenthood. Several states also have launched investigations into the organization.

Planned Parenthood receives more than $500 million of its $1.3 billion annual budget from federal and state programs. According to 2013 data, the latest available, Planned Parenthood says abortions represent 3 percent of the total services its facilities provide.

Democrats and other opponents of cutting off federal funds point to the millions of women across the country who rely on Planned Parenthood for contraceptive care, many who otherwise couldn’t afford it. Planned Parenthood also provides limited testing for sexually transmitted diseases and cervical cancer screenings.