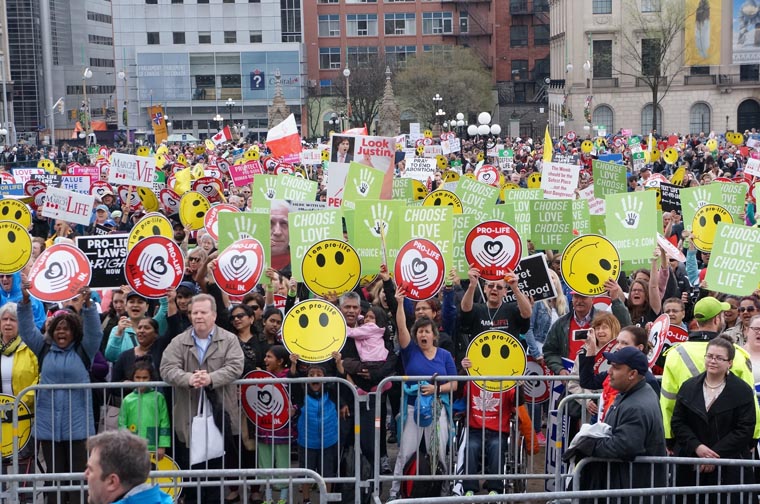 OTTAWA, Ontario (CNS) — Heeding a call from Toronto Cardinal Thomas Collins to “speak more loudly by silence,” Canada’s largest pro-life march reversed course May 10 after it was blocked for at least 20 minutes by a counterprotest.

An estimated 75-100 pro-abortion advocates, some wearing black bandanas over their faces, screamed chants and waved signs, halting the National March for Life until marchers turned around and took a different route through the streets of downtown Ottawa.

The pro-life marchers had been warned during a rally on Parliament Hill to expect counterprotests.

“Soon you will come upon people yelling and screaming,” Cardinal Collins warned the crowd that packed the walkway to the Peace Tower and the west lawn of Parliament Hill.

He urged the marchers to “speak more loudly by silence.”

“There is great power in silence,” he said, asking people to make a “silent pilgrimage of deep prayer.”

“Only in that disposition will we see the way in which these great evils will be overcome,” he said.

Marchers were also forced by protesters to change course last year, but this time they had to completely turn around.

Campaign Life Coalition President Jim Hughes said some marchers were angry the police did not clear the counterprotesters out of the way.

A police spokeswoman said that while the march had a specific route, the counterprotesters “have a right to protest” and police were “measuring safety against the right of people to protest.”

Cardinal Collins noted Parliament Hill was a “place of political power” and that people of faith had a right to be heard.

“We have a right to a place at the democratic table,” he said to cheers from the crowd. He called it important to “profess our support for life,” because the right to life is “under great attack at this time.”

The attack is “part of a much greater struggle,” that must be “put into the context of the great struggle of good and evil,” he said.

Political action alone cannot make the profound changes needed in the human heart, he said; only prayer can do that.

“A sign of hope” is that the proponents of abortion and euthanasia “seem to be ashamed” of these acts, he said. That is why they use euphemisms to call abortion a “termination of pregnancy” and euthanasia “medical aid in dying,” he said.

“I am pro-life,” said Cardinal Lacroix, addressing the crowd in French. “Why? I don’t know any other way to live.”

Every human life is precious, he said. People talk about being inclusive, he added, but real inclusiveness is a willingness to welcome and to accompany those who are suffering, weak or fragile.

He urged the many young people present who often say they are “against” this or that to adjust their language, so they are “for life,” and “for the marginalized and the excluded.”

Speaking on behalf of about 10 pro-life members of Parliament and senators, Harold Albrecht, a Conservative Party member of Parliament, said Canada destroys the lives of 100,000 unborn children a year.

“Governments are judged by how they treat their most vulnerable,” he said. “There’s no question the most vulnerable among us are those living their first nine months in their mother’s womb.”

“Human rights must be extended to these smallest members of our human family,” he added.

Hughes said the Canadian March for Life was inspired by the late Nellie Gray, who began the National March for Life in the 1970s after the U.S. Supreme Court decision in Roe v. Wade legalized abortion.

He estimated between 10,000 to 15,000 participated in this year’s march, down from last year’s crowd of more than 20,000. Some cancelled after rain was forecast, he said, and others may have stayed away because the east lawn of Parliament Hill was inaccessible because it is being re-sodded.

Police blocked off the block of Bank Street where the Morgentaler abortion facility is located, and two police cars parked on the sidewalk opposite. Ontario passed bubble zone legislation last fall that forbids protesters inside a 50-meter zone around abortion clinics.