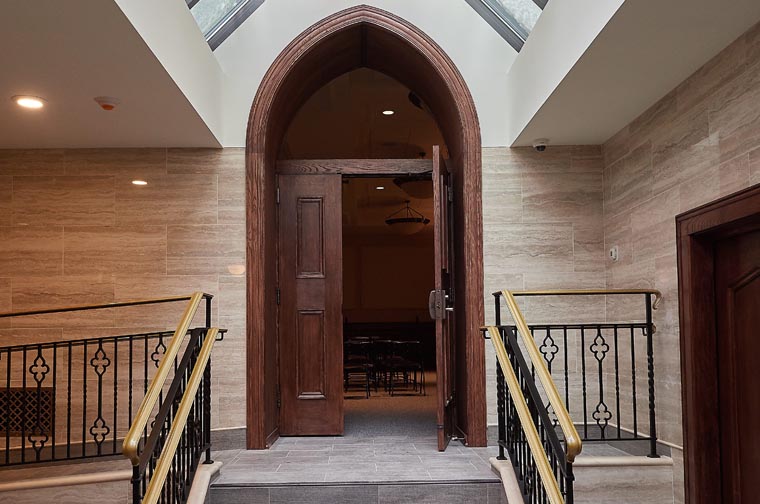 The first phase of the project to restore the Cathedral of the Immaculate Conception is complete and the second phase is beginning, diocesan officials report.

More than 100 years of weather and use took their toll on the Cathedral, leading to leaking roofs, cracking floors, outdated utilities, and inadequate facilities, among other damage and decay. In 2015, the diocese convened a committee to create a plan to restore the Mother Church of the diocese. The committee was chaired by Jim Tuozzolo, chairman of the Facility Planning Committee of the diocese, and included COR Development, Huber-Breuer, Pyramid Brokerage, members of the Cathedral parish, and members of the diocesan Finance Council, according to John Barsanti, diocesan Chief Operating Officer and Chief Financial Officer.

The first phase of the restoration began in February 2016 and all but a few final “punch list” items are complete, according to Ed King, director of facilities for the diocese and overall coordinator of the Cathedral project.

A gathering area, capable of accommodating more than 250 people, was created in the former daily Mass chapel space. New and vastly expanded restrooms have been created. In the adjoining parish center, classrooms, meeting rooms, and office space have been outfitted with needed technology. Three priest residences and one guest room on the top floor have been renovated. A new elevator ensures the building is accessible to all. Utility systems were replaced and structural repairs were made throughout.

King and Barsanti noted that unforeseen environmental and structural issues were discovered and corrected during the phase one process, including asbestos, two underground fuel tanks, and beams not reflected in the original architectural drawings.

Msgr. Neal Quartier, rector of the Cathedral, said parishioners are positive and hopeful about the project and the progress to date. “They’re very excited, very supportive,” he said, noting that Cathedral parishioners contributed more than $1 million to the restoration project.

The second phase of the restoration, addressing the Cathedral itself, began in January 2017.

Plans include replacing the roof, the electrical and heating and cooling systems, the flooring, and the lighting and audio systems. The main and side altars will be restored and the Blessed Sacrament returned to the original high altar. The walls, ceiling, and masonry will be repaired and restored.

The main church will close April 17, the day after Easter, to allow for this work. It is scheduled to reopen Sept. 5, the day after Labor Day. During this time, Mass will be celebrated in the gathering space, Msgr. Quartier said, with overflow seating and live video of the Mass in two of the parish center’s multipurpose rooms.

According to Barsanti, the work schedule is as follows:

• The sanctuary area will be completed by Easter.

• The side pews were removed March 1. After Easter, all the pews will be removed and refurbished, and returned in August.

• The new roof will begin to be installed the Monday after Easter and completed by June 1.

• The “dirty” work of preparing the walls for painting, tearing out the floor, and installing the new heating and ventilation system will be complete by June 1.

• Starting June 1, the “clean” work begins with painting the walls, cleaning the ceiling, installing the new floor, and many other items.

“With the talents, support, and hard work of the diocesan Facilities team, support from the City of Syracuse, the architectural firm of QPK, the construction firm of Huber-Breuer, the dedication of all the sub-contractors on the project, and the patience of the Cathedral staff, the total project should come in on time and on budget,” Barsanti stated in materials provided to the Sun. “That in itself is a credit to the Facility Planning Committee and the Cathedral Planning Committee of the diocese.”

The total cost of the project is estimated at $11 million.

The first phase was estimated in 2015 at a cost of $2.7 million, according to Barsanti. “This estimate was completed before detail planning and cost estimates were put together,” he said, and also “excluded the architectural and engineering costs, the construction management costs, and other support costs from the diocese to prepare and assist in the construction activities. The total cost of Phase 1 was $4.5 million.”

The anticipated cost of Phase 2 is $5.7 million, including architectural engineering, liturgical consultant, and diocesan support, he said.

Additionally, three endowment funds will be established for the Cathedral: a capital fund to provide for long- and short-term maintenance, a fund for outreach to the poor, and a sacred arts and music programming fund. The total goal of these funds is $7 million.

Barsanti explained that an estimated $10.2 million is available for the project, assuming two percent of the pledges will be uncollectible; fundraising expenses of $650,000 or $.05 per dollar committed; interest costs of $325,000 as pledges are collected; and excluding the irrevocable trust pledge.

“Parishes and their parishioners have donated in excess of $5 million for the restoration of the Cathedral — a remarkable showing, particularly in light of the fact that it was a freewill offering. There were no assessments or quotas for parishes,” Parker said. “I think this clearly shows the respect with which Catholics of the diocese view their mother church.”

Msgr. J. Robert Yeazel, chair of the fundraising campaign, echoed those sentiments. “Our major givers are people excited about the legacy we are leaving future generations, as well as people who have a deep love for the Church and for Our Lady — salt of the earth Catholics who have been blessed in their own lives and are glad to share those blessings with the Church,” he wrote in an email.

“Our priests are the best any diocese could have!” he continued. “There is a fraternity among us that is palpable. It is the priests who have carried this campaign in both their encouragement of their people and in their personal sacrificial pledges to make this campaign such a great success.”

Parker noted, “Under the leadership of Bishop Cunningham and Msgr. Yeazel, and with the support of the pastors of the diocese, the diocesan development team, and the philanthropic consulting firm of Changing Our World, the Cathedral Restoration Fund has continued to keep pace with the cost estimates of the project.”

The fundraising campaign is ongoing.

“For those who have not yet been a part of so honoring Our Lady and restoring Her Cathedral, I would encourage them to consider a pledge for three to five years of an amount equal to what they contribute to their parish annually,” Msgr. Yeazel said. “That will not only restore our Cathedral but also help us to continue to build the Endowment for our Cathedral….The Cathedral is our Mother Church and, just as we care for our mothers wherever they live, may we so care for this vibrant and sacred symbol of our love for Our Blessed Mother and Her Son.”

“When I arrived here in the Diocese of Syracuse in 2009, I was repeatedly told of the faithfulness and generosity of its people. I am forever grateful that this statement continues to ring true. The response to the Cathedral Restoration Project from our people, parishes, and clergy has been overwhelmingly positive. Restoring the Cathedral has proven to be of great significance to many, in part, I believe, because people rightly identify it as our Mother Church. As such, we are ensuring that it is well-maintained for the faithful of today as well as those who walk through its doors in years to come.”